Startled shoppers have spotted a snake crawling between handbags at a charity shop.

The carpet python was found last week by a woman in a thrift store in Capalaba, a suburb 20km south-east of Brisbane.

Thomas Robinson uploaded the clip to TikTok and revealed he was alerted by the python’s presence after seeing a woman screaming and running out of the store.

“Turns out that a cute little carpet python found its way into the store… most likely inside a sale!” he wrote. 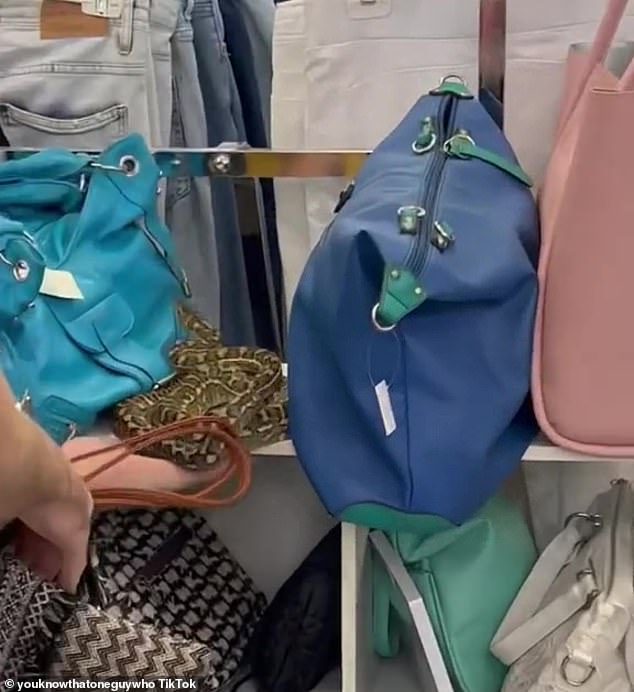 Shoppers were shocked to find a carpet python hiding between handbags at an op shop in Capalaba, a suburb 20 km south-east of Brisbane

‘Seemed exceptionally friendly, which immediately led me to believe it was a pet.’

“Does anyone know anyone who recently misplaced their beloved Python?” asked the TikTok user.

Mr Robinson, who has a wildlife license and a background in dealing with snakes, is seen in the footage trying to separate the handbags to get to the python.

He uses a purse strap to pull the python towards him before grasping it in his hand.

A woman asks if the snake is dangerous, but other shoppers reassure her that carpet pythons aren’t poisonous.

Mr Robinson tells shoppers standing nearby the snake “won’t bite” and is likely a pet.

The python puts its head up against the phone used to film the encounter and then moves toward Mr. Robinson’s head.

Mr. Robinson’s mother is heard telling the other shoppers that her son is “the snake man.”

“He’s like the Steve Irwin from Capalaba,” joked another woman.

A staff member puts down a box while Mr. Robinson tries to place the carpet pythons in it.

“I feel sorry for the owner, they’re probably just like, ‘Where did Fluffy go?'” says one woman.

After refusing to go into the crate, the python is placed in a large plastic bag.

Mr Robinson, who kept the carpet python at his home after a vet visit, is currently looking for its owner.

His TikTok video has accumulated more than 500,000 views.