Carolina Panthers have interviewed Bills offensive coordinator Ken Dorsey, who went viral over last year’s incredible loss in Miami, as they continue to search for a new head coach

Dorsey, 41, previously spent seven seasons with the Panthers, including five as the team’s quarterbacks coach, and helped Cam Newton win MVP honors in 2015 and Carolina win the NFC Championship. 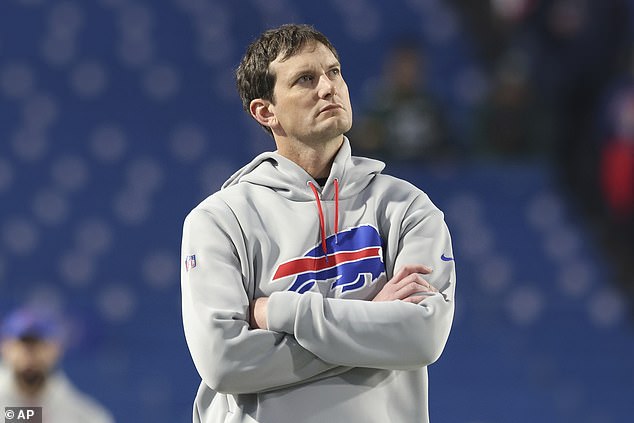 Under Dorsey, the Bills’ offense continued to thrive this season after former offensive coordinator Brian Daboll left to become the head coach of the New York Giants. With Josh Allen at center, Buffalo finished second in the league at 397.6 yards per game and second in scoring at 28.4 points per game.

All was not smooth, however, as Dorsey made headlines earlier in the year for an incredible meltdown in Miami that saw him throwing papers and notepads around in a violent reaction to his team failing to get the ball up in time for a late comeback.

As the game entered the final stages, the Bills were down but had a chance to steal the win only for their lines to soften and Dorsey’s reaction was accidentally caught on camera for the world to see.

In the days after the incident, he told reporters, “We’re human, it happens like that,” but didn’t apologize for his incredible reaction.

Brooke Shields reveals she was raped and "disconnected from her body" in a hotel room at the age of 22.

Households with fixed-rate mortgages face a shock surge in 2023