The judge who presided over Casey Anthony’s murder trial says he doesn’t believe her most recent claims that her father drowned her daughter to cover up accidentally smothering her with a pillow during an alleged sexual attack.

In her first sit-down interview, Anthony appears in a three-part docuseries ‘Where the Truth Lies’ on Peacock, where she claims that both she and her daughter Caylee were sexually abused by her father George.

George Anthony has vehemently denied the claims and has ever been charged in connection with the allegations, nor has he been implicated in Caylee’s 2008 death.

Judge Belvin Perry Jr. said he didn’t believe her story back in 2011, and he doesn’t believe her most recent claims, telling the U.S. Sun: ‘Casey Anthony’s believability is pretty much zero.’

Anthony was infamously acquitted of murdering her two-year-old daughter Caylee after a highly publicized trial in 2011 during which she was dubbed the most hated woman in America. 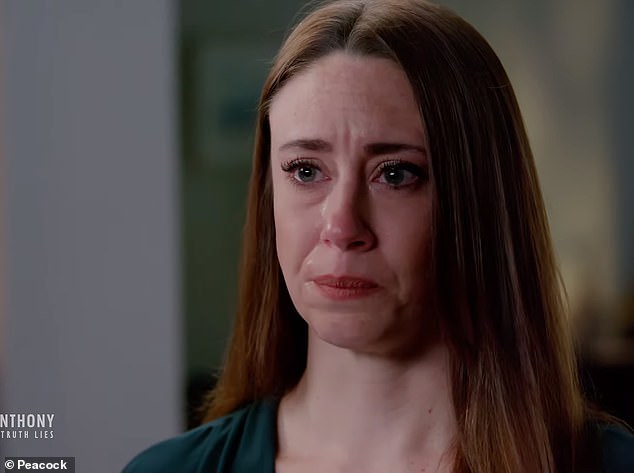 Judge Belvin Perry Jr. said he didn’t believe her story back in 2011, and he doesn’t believe her most recent claims, telling the U.S. Sun: ‘Casey Anthony’s believability is pretty much zero’

Anthony has always denied killing Caylee, despite cadaver dogs picking up the traces of human remains in her vehicle. Caylee’s skeletal remains were discovered near the family property in Orlando, Florida.

But now claims in the new series, which began airing on November 29, that she woke up from a nap to find Caylee, who’d been with her, gone.

She suggests that her father, George, had sexually abused her, claiming he did the same to her when she was a child. She maintains that only her father knows how Caylee died.

‘It’s still something I can’t piece together but I wasn’t the only one home. I’m not outright accusing him of murder but it wasn’t an accident in the pool,’ she said, refuting the theory her attorneys put forward at the trial.

‘When I was eight-years-old my father started to come into my room at night. I was physically hurt…scared because I can’t tell mommy what happened, she’ll get mad at me – that’s what I was told. With my father, the abuse one day just stopped, right before my 12th birthday.

‘Then my brother started coming in shortly after I turned 12 and it stopped around the time I was 15. It wasn’t the same thing that happened with my father, my brother never raped me, but it was close enough where there was a pattern,’ she says.

Her allegations have never been proven.

But Judge Perry was not deterred by her new claims.

‘Nothing surprises me about her anymore,’ Judge Perry told the US Sun.

Casey and her father George before Caylee’s death. She previously accused him of sexually abusing her as a child, though he has never been charged over those claims

Anthony has always denied killing Caylee, despite cadaver dogs picking up the traces of human remains in her vehicle. Caylee’s skeletal remains were discovered near the family property in Orlando, Florida in 2008

When speaking about the claims she made at the trial in 2011, the judge said: ‘One question I have is why would George, who clearly loved this child beyond measure, take a simple drowning of a child, not call 911 to see if she can be resuscitated, then duct tape the body of the child and place it in garbage bags, and then dump it in a swap-like area?

‘No normal human being does that. George was a former police officer.

‘Why would someone take a tragic drowning and turn it into something else? You just don’t do that. … I’ve never heard of such a case.

‘Casey’s always been one for dramatic flair … [her claims] are just not believable at all.’

Perry also talked about two different sides of Anthony he saw during the trial.

‘On the one side, she was quiet and shy in the presence of the jury. Very calm, very collected. I don’t want to say the word mousey but she had this low-key demeanor,’ he said.

‘But when the jury was not there she was very much in charge. Her personality became a lot more outgoing, she was not a shrinking violet anymore, and she was engaging with her attorneys.

‘They were two clear contrasts; I call them the two faces of Casey.

‘It’s quite evident she knew how to play, work, and take advantage of the audience that she was put before.

‘When she needed to be she would be timid and not intimidating, as opposed to being outgoing and louder – or what some people would consider the real Casey.’

Anthony acquittal in 2011 shocked the world – and Judge Perry.

‘The prosecution made a very strong and compelling case,’ he said.

‘But even when you have a strong and compelling case, you have to be able to present the case in a way that will resonate with the 12 folks in the jury box. You have to make adjustments.

‘You can’t take an audience that’s made for classical music and go and play classic rock for them.

‘Hindsight is always 2020, but [Casey’s team] was able to find a way to make their case fit the jury and the makeup of that jury – they made those corrections.’

There has been swift backlash of the Casey Anthony’s documentary airing with many thinking it gives her an unnecessary platform. But Judge Perry told the US Sun that he believes she ‘has a right’ to share her side of the story.

George and Cindy Anthony testified at their daughter’s trial. They have since become estranged and believe that Casey drugged Caylee

‘I believe in the United States Constitution, and I believe in freedom of speech,’ he said.

‘I don’t know how doing this is going to work in her favor, I’ll leave that to greater minds.

‘She’s telling her story and the question is, who is going to believe it?

‘Does it tell us anything different? Does it answer any of the age-old questions? Which one is it? Which [claim] is true?’

In 2008, it took 31 days for Anthony to call police and tell them Caylee was missing. On July 15, 2008, Anthony’s mother Cindy first alerted the authorities to Caylee’s disappearance.

Anthony claimed initially that her daughter drowned in the pool at the family home. Now, she says that is impossible because of how high up it was. She says her father killed Caylee then put her in the pool to make it look like she drowned. Caylee is shown with her maternal grandmother, Cindy, in an evidence photo from the trial

George, right, and Cindy Anthony walk back to their seats after placing a teddy bear at the memorial for their granddaughter Caylee Anthony in Orlando, Florida, February 10, 2009

The couple hadn’t seen Casey or Caylee for a month. They then found Casey’s car in a tow-yard, and George said the smell ‘took his breath away’. In her 911 call, Cindy told the dispatcher: ‘Caylee’s missing. It smells like there’s been a dead body in the damn car.’

Anthony then told police that she’d left her daughter with a babysitter, Zenaida Gonzales Fernandez, and that she was also missing.

Now, she claims in her Peacock documentary that the last time she saw her daughter was in her father’s arms on June 16, after she woke up from a nap.

‘During the 31 days, I genuinely believed that Caylee was still alive.

‘My father kept telling me she was ok. I had to keep following his instructions. He told me what to do. I tried to act as normal as I could.’

She said she went to live with her boyfriend, then returned in July to find her daughter gone.

‘I lied. But nobody asked me why,’ she says in the trailer for the Peacock docuseries.

She then goes on to repeat old and unfounded claims that her father sexually abused her as a child.

‘He’d put a pillow over my face and smother me to knock me out. That happened several times. I’m sure there were times where I was incapacitated as a child where my body was limp and lifeless.’

She says now that she believes her father went on to abuse Caylee after her.

‘That’s what I think about. I wish every day I had said something to someone about something. Maybe then things would be different.’

George has in the past hit out at Anthony’s lies, telling a previous documentary that her claims Caylee drowned were not true.

Now, Anthony claims in her Peacock documentary that the last time she saw her daughter Caylee was in her father’s arms on June 16, after she woke up from a nap

George Anthony was forced to provide a DNA sample during the trial to disprove his daughter’s lawyer’s obscene suggestion that he had incestuously fathered Caylee.

George also claimed Anthony might have drugged her daughter, saying Caylee often slept for up to 13 hours at a time.

The prosecution told a story of a young mother who regretted having kids and wanted a way out. They seized on the fact that Anthony was photographed in bars and partying after the last time she saw her daughter alive.

They argued that Anthony suffocated her daughter with duct tape.

While Casey was convicted of lying to police, the jury acquitted her of murder in a shock verdict in 2011.

She then went to live with Patrick McKenna, the lead investigator from her case. It is unclear where she now lives.