Chelsea on Friday complete the £29million signing of PSV Eindhoven winger and England Under-21 star Noni Madueke, while the Blues’ spending spree continues under Todd Boehly but the £55million bid for Moises Caicedo will rejected by Brighton

Chelsea have agreed a £29m deal for Noni Madueke with PSV Eindhoven but turned down a £55m offer for Brighton’s Moises Caicedo.

Winger Madueke, 20, will complete his move on Friday but Chelsea’s hopes of adding midfield target Caicedo were dashed when Brighton rejected his offer, saying they had no desire to sell that window. 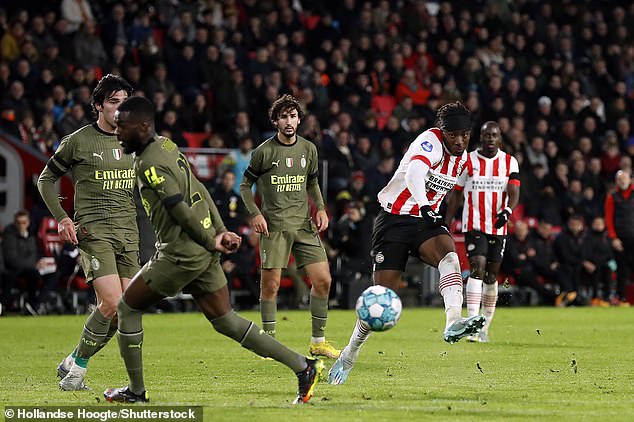 Chelsea made their opening £26.5million bid for Madueke last week, which was rejected by the Dutch side.

They then diverted from negotiations to tie the signing of Mykhaylo Mudryk from Shakhtar Donetsk but returned to talks for Madueke earlier in the week and are now finalizing details on the up to £36m fee for the England U21 star national player.

Chelsea have held talks with PSV to persuade the Dutch side to sell the England U21 winger.

Madueke, 20, has been with PSV Eindhoven since 2018 and has four caps for England Under-21s

Madueke has established himself at senior level and as one of Europe’s most promising young wingers since leaving Tottenham aged 16 for PSV in 2018.

He is well known to Chelsea head coach Graham Potter and the recruitment staff who have followed him from Brighton – specialist Kyle Macaulay and now Paul Winstanley, director of global talent and transfers at Stamford Bridge – as Madueke was on their radar in the summer when they were still there at Amex.

Newly appointed Chelsea technical director Christopher Vivell has also shown an interest in Madueke, 20, when he was previously at RB Leipzig.

Having sold Cody Gakpo to Liverpool earlier this month, PSV were reluctant to part with Madueke, who is fit again after an ankle injury that interrupted his season so far.

Although PSV boss Ruud van Nistelrooy admitted his concerns about their prospects of keeping another of their stars if a big enough offer is made, his club values ​​Madueke at around £35million.

Chelsea aren’t done there as they remain interested in adding a midfielder.

How to see your most played champions