By Simon Jones for The Mailonline

Chelsea have shown interest in Brighton’s Moises Caicedo and Leandro Trossard as they weigh up their next moves.

On Sunday, the Blues unveiled their fourth signing of the January transfer window with the £88m capture of Ukraine striker Mykhailo Mudryk.

Mudryk followed the arrival of Benoit Badiashile, David Datro Fofana and the loan deal for Joao Felix, all of whom have joined the London club this month. 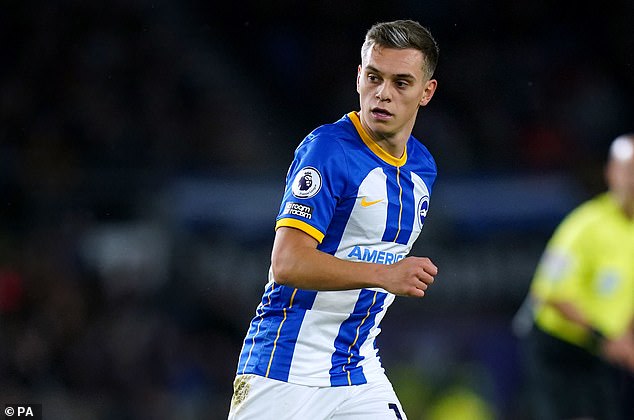 However, the Blues could return to Brighton for their next targets in Ecuador midfielders Caicedo and Trossard, who were in the news this week after a row with Seagulls boss Roberto De Zerbi.

The Belgian reportedly boarded a Eurostar to return to his home country after learning he was dropped from Brighton’s matchday squad following questions about the forward’s hiring.

De Zerbi has since confirmed the door is open for Trossard to return to the club but his future remains in doubt and has been linked with a move from the south coast during this window.

The Blues have already made four signings in this window, including the £88m deal for Ukraine star Mykhailo Mudryk

Alongside Chelsea, Trossard remains of interest to Tottenham, who are also in talks with Sporting Lisbon about Pedro Porro this week.

Trossard’s contract expires at the end of the season, although the Seagulls have an option to extend his contract by 12 months.

The Blues are also interested in Trossard’s team-mate Caicedo, but he won’t come cheaply.

The midfielder has three years left on his current contract but Chelsea have earmarked him as a possible replacement for long-term absentee N’Golo Kante.

Any rapprochement from Chelsea would mean another raid on Brighton after they signed Marc Cucurella in the summer and then poached Graham Potter and his staff from The Amex to replace Thomas Tuchel in September.

Meanwhile, Tottenham’s pursuit of Porro could end this week if Spurs agree to honor the £40m buyout clause in the right-back’s contract.

https://www.dailymail.co.uk/sport/football/article-11638465/Chelsea-set-raid-Brighton-step-Moises-Caicedo-Leandro-Trossard.html?ns_mchannel=rss&ns_campaign=1490&ito=1490 Chelsea set to ambush Brighton AGAIN as they ramp up interest in Moises Caicedo and Leandro Trossard