Chicago Mayor Lori Lightfoot attacked Texas Governor Greg Abbott’s faith during a seething address that saw the Democrat tear into the politician for bussing illegal migrants to her city.

Lightfoot, 60, slammed the GOP governor Sunday after witnessing the arrival of another 75 asylum seekers hour earlier – and welcoming 60, albeit begrudgingly, on Wednesday.

A Democrat who has repeatedly touted Chicago as a ‘sanctuary city’, Lightfoot seemed to take issue with Abbott’s migrant policy during a press conference at City Hall, calling the arrangement ‘un-American’ and ‘racist.’

It comes as Abbott, in an attempt to call the cities’ bluff and show them the reality of his state’s border crisis, has ordered dozen of buses of bearing thousands of migrants to both the Big Apple and Washington, DC – with the Windy City joining that list this week.

Hours after accepting the second slew of migrants Sunday, Lightfoot accused 64-year-old Abbott of ‘manufacturing a human crisis’ with the maneuver – and even cast doubt on the governor’s Christian faith. 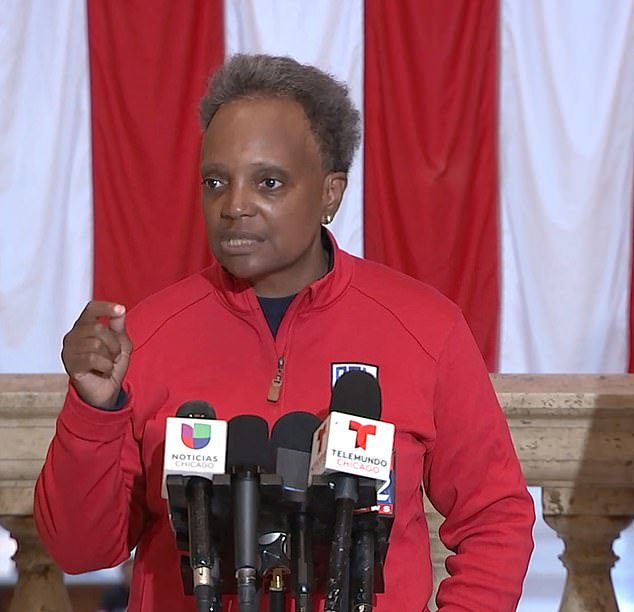 Chicago Mayor Lori Lightfoot slammed Texas Gov. Greg Abbott Sunday after he sent another 75 migrants to her city, casting doubt on the politician’s religion in relation to the decision.

‘He professes to be a Christian,’ Lightfoot said at a press conference on Sunday. ‘This is not the Christianity and the teachings of the Bible that I know. And I think religious leaders all across the country are standing up and denouncing exactly this.’

Lightfoot, an African-American progressive who slashed $59million from her city’s police budget in 2020 but performed an abrupt about-face on that policy in 2021 amid increasing crime, went on to assert Chicago is happy to have new residents, but accused Abbott of treating the migrants as political chess pieces.

‘I think it’s decidedly unpatriotic and un-American,’ she told onlookers at the press briefing, before going on to assert that she ‘understand[s] the crisis Texans are currently facing at the border.

‘I understand the pressures that the people of Texas and some of the other border states are under,’ Lightfoot said. ‘We see that on a daily basis.’

Lightfoot comments Sunday came after witnessing the arrival of another 75 asylum seekers hour earlier – and welcoming 60, albeit begrudgingly, on Wednesday. Pictured are some of the 75 migrants bussed to the city by Texas Governor

‘This is not the Christianity and the teachings of the Bible that I know,’ she said at the presser. ‘I think religious leaders all across the country are standing up and denouncing exactly this’

She went on: ‘But the thing to do is not this. This is creating a human crisis. And treating people without dignity, without respect, it’s not who we are as Americans.’

The comments came less than a month after Lightfoot proudly proclaimed her city would welcome migrants amid the unrest at the southern border – a sentiment she seemed to backtrack on during Sunday’s speech.

‘My frustration comes from the actions of the governor of Texas,’ she said at a press conference. She added that while she welcomes new residents, she takes issue with Abbott bussing migrants to her city – calling the policy inhumane.

‘There could be a level of coordination and cooperation, but he chooses to do none of those things. Instead, he chooses to send human beings across the country to an uncertain destination,’ Lightfoot asserted, ‘That’s unacceptable.’

Again, she declared: ‘He is manufacturing a human crisis, and it makes no sense to me.’

The first wave of migrants arrived in the Windy City on Wednesday, with two buses carrying 60 asylum seekers to Chicago from Texas last week

The mayor went on reiterate remarks made in a Wednesday afternoon address delivered after the arrival of the first wave of migrants into the city, that she would help them find shelter, work and schools.

‘We are a welcoming city. We are always going to step up and do the right thing to make sure that migrants coming into our city are well received, that they’re supported,’ she told the crowd Sunday.

The Democrat concluded the address by announcing the the launch of a donation page for the migrants in response to the arrivals, to provide the newcomers with necessities like clothes, shoes, diapers, and blankets.

She then demanded willing participants sign up and volunteer for the fundraiser – just days after Abbott said he would continue to send buses to Chicago as well as New York and DC, to alleviate some of the stress felt down South as a result of a recent uptick in illegal immigration under the administration of President Joe Biden.

‘We have people coming as families, young children with their first taste of democracy and freedom in many instances and we need to make sure that the memory they have of Chicago and of the United States is favorable,’ Lightfoot said.

‘Regardless of where their life journey takes them, I want them to feel like in this moment that they came to this city, and we wrapped our arms around them, loved them and supported them.’

Lightfoot’s attack on Abbott echoed similar scathing statements issued by New York City Mayor Eric Adams, who has called the busing of migrants to his city at Abbott’s direction ‘horrific.’

Despite attacking the Texas governor for what she called a political maneuver, Lightfoot went on reiterate remarks made in a Wednesday afternoon address that she would help them find shelter, work and schools.

“When you think about this country, a country that has always been open to those who are fleeing persecution and other intolerable conditions, we’ve always welcomed that,’ Adams said, amid accusations that Abbott’s administration has been using barcoded wristbands to track the migrants and ensure they reach their destinations.

‘This governor is not doing that in Texas, but we are going to send the right message, the right tone, of being here for these families.’

At the time, Adams insisted that many of the families on the dozens of buses his city has welcomed from the Lone Star State thus far were forced to be there against hteir will and not allowed to go where they wanted.

‘This is horrific when you think about what the governor is doing, the governor of Texas, after months of traveling across the border, placing them on the bus with no direction,’ Adams said.

Days later, Abbott defended the police, dubbed Operation Lone Star, in a statement, claiming it has filled in the ‘dangerous gaps left by the Biden Administration’s refusal to secure the border.

‘Since the launch of Operation Lone Star, the multi-agency effort has led to more than 290,700 migrant apprehensions and more than 18,000 criminal arrests, with more than 15,400 felony charges reported,’ Abbott’s statement read.

‘In the fight against fentanyl, DPS has seized over 325.9 million lethal doses throughout the state. Texas has also transported over 6,500 migrants to the nation’s capital — and now New York City — since beginning the busing mission in April to provide much-needed relief to our overwhelmed border communities.’

Amid the continuing war of words between the pair, Adams, 61, has demanded the Republican to be voted out of office in November’s upcoming midterm elections, accusing him, exactly as Lightfoot did, of using the migrants ‘as political pawns to manufacture a crisis.’

‘Adams talked the talk about being a sanctuary city, welcoming illegal immigrants into the Big Apple with warm hospitality,’ Abbott wrote. ‘Talk is cheap.’

He went on: ‘When pressed into fulfilling such ill-considered policies, he wants to condemn anyone who is pressing him to walk the walk.’

Later that day, Adams responded with his own quip through a spokesman, in which he labeled Abbott un-American, also eerily similar to Lightfoot’s remarks.

More than 10,000 migrants have now been bussed to Chicago, NYC and DC, Governor Abbott’s office has told DailyMail.com

‘Someone get this man a dictionary,’ Adam’s scathing statement began. ‘Hypocrisy is claiming you love America and then decrying the words on the Statue of Liberty.

He added that despite Abbott’s assertions, ‘New York City will continue to welcome asylum seekers with open arms.’

‘These individuals and families have been through hell, and they deserve more than being used as political pawns by a governor who cares about nothing more than re-election,’ Adams added.

Meanwhile, migrants arriving in all three cities from the border will be housed, temporarily, on taxpayers’ dime.

Real Madrid's offer for Antonio Rudiger "was the SMALLEST thing on the table," reveals Saif Rubie