Chris Eubank Jr. has responded to his upcoming opponent Liam Smith’s bizarre “You’re gay” spat by wearing an armband in support of the LGBT+ community.

The fighters clashed in the run-up to Saturday’s fight, with Smith suggesting Eubank Jr. was “gay” before Eubank Jr. in turn made allegations that his rival was being unfaithful to his girlfriend.

Now Eubank Jr. has further expanded his response by wearing the same rainbow armband that soccer captains were not allowed to wear during the World Cup in Qatar in late 2022 as they faced off before their clash. 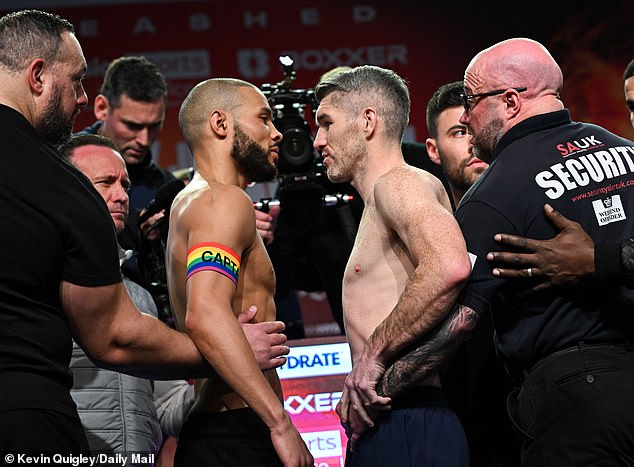 Chris Eubank Jr. wore a rainbow armband in support of the LGBT+ community as he faced Liam Smith ahead of their fight on Saturday

Posting on social media in support of the Pride movement, Eubank included a picture of him confronting Smith while wearing the armband, with the caption: “We don’t discriminate…we don’t alienate.” We want boxing & sport as a whole, all inclusive.”

Eubank Jr. and Smith are facing an investigation from the British Boxing Board of Control (BBofC) over their shameful “personal” and “homophobic” comments at their pre-fight press conference.

Before the weigh-in there were many apologies for the tacky insults of 24 hours ago, but not an ounce between Eubank and Smith as they stepped on the scale.

Both came in at 11st 5lbs, exactly two pounds below middleweight.

In previous interviews, everyone offered some apologies for the sexual abuse, which Sky Television publicly deplored, and the British Boxing Board of Control promised to investigate.

In response to Smith’s false suggestion that he might be gay, Eubank came on stage with the Pride armband, which Harry Kane was banned from wearing in Qatar.

And though silence was golden for most of the long stare, Smith couldn’t resist calling Eubank a clown at the end.

Junior responded by saying: “He’s done it personally so it’s not just normal business at the Manchester Arena this Saturday night anymore. I will enjoy punishing him.

On Friday morning, the BBofC released a statement signed by Secretary General Robert W. Smith, announcing that they were aware of the comments and were investigating.

“The British Board of Boxing Control is aware of the comments by Liam Smith and Chris Eubank Jnr. at yesterday’s press conference, and the board stewards will look directly into the behavior of the two boxers,” it said.

When the boxers met again for the weigh-in on Friday afternoon, Eubank Jr stepped out in a Manchester United jersey with a rainbow captain’s armband, likely to upset Liverpool fan Smith.

On Friday morning, the BBofC released a statement announcing they were investigating the comments made

The insults stemmed from the pair’s appearance on ‘Gloves Are Off’ – a staple of Sky Sports’ pre-fight promotion, which saw two fighters sit across from each other to chat with former world champion Johnny Nelson.

In fact, their episode had to be shortened — and carefully edited — last month after Eubank and Smith lit fires on each other’s families.

But the British boxers clashed again on Thursday, with Eubank Jr lashing out at Smith, saying: ‘If you want to get dark and personal talk about being gay and do I like girls? I have been told by several sources that you occasionally cheat on your wife.’