Footage has emerged of a high-spirited local resident wreaking havoc by “deliberately” dropping potted plants from a balcony onto a busy CBD alley.

Melbourne City Council issued a public alert after a sulphur-crested cockatoo was filmed picking up plants on an apartment balcony and then dropping them onto the footpath – and vulnerable pedestrians – below.

Video shot on Monday shows the cheeky bird several floors up in an apartment building on Flinders Lane happily tossing down the plants as bewildered bystanders look on.

A construction worker kept an eye on the bomber.

“Be careful,” a man can be heard warning passers-by. 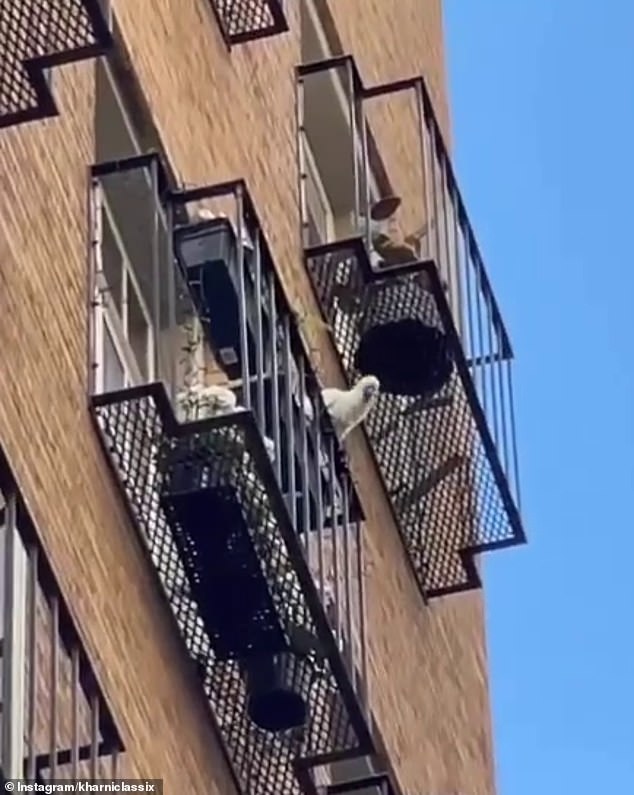 “He’s not happy. Here comes another one!’

A man riding by on a mobility scooter was nearly hit by the projectiles.

The apartment building was above an optometrist on the corner of Scott Alley, a stone’s throw from busy Swanston Street.

Video of the incident has attracted more than 1.5 million online views since it was shared by social media meme site Brown Cardigan.

Local residents and workers are used to the crazy antics of the birds.

“You can’t do anything about it. At the end of the day, it’s nature.”

“The intentional tossing of potted plants from a multi-story balcony is a recent observation — it’s bizarre and intriguing,” he said.

“Haha, he’s looking down at everyone and he’s like, ‘What are you going to do? Call the police?’ one wrote.

Another added, “I like how he looks down to inspect his handy work.”

Others pondered the potential nightmare of filing insurance claims.

“I want to insure my car. A cockatoo dropped a pot on my windshield,” one woman quipped.

Melbourne City Council has been made aware of the footage and has urged residents to remove potted plants and other food sources from apartment balconies to stop attracting birds.

An online viewer added: “That’s why you shouldn’t be feeding them. If you don’t show up on time, they get angry and start trashing the store.”

Sulphur-crested Cockatoos are inquisitive and highly intelligent birds that can be locally very numerous.

The species has become a pest in many urban areas, where it uses its beak to overturn garbage cans and destroy wooden decking and paneling on buildings, according to the Australian Museum.

Samuel L. Jackson Slams Back at Quentin Tarantino for Saying Marvel Actors Are 'Not Movie Stars'