An award-winning Coles store manager claims he was fired after ratting on a transgender worker who stripped in the tea room and is now struggling to provide for his family of four.

Karan Sharma, 33, was appointed caretaker of the Caversham Coles store in Perth last year after six years at the supermarket giant’s Albany stores.

But soon after arriving, the father-of-two said he saw the transgender worker stripping during a staff birthday party – revealing his scarred torso and stripping his pants down to his underwear – and complained to the state director.

Mr Sharma was fired from his $168,000-year job weeks later after employees leveled a series of allegations against him, including making transphobic, homophobic and racist remarks.

The Fair Works Commission heard Mr Sharma react aggressively when confronted with the allegations and ruled that his evidence was not “credible” when it rejected his request to have the sacking overturned this week.

However, Mr Sharma insists he is innocent and claims the dispute erupted after he tried to take action against the transgender worker who stripped at work.

“Someone can be half-naked in the tea room and I have done something about it – but have been told I discriminate against trans, gay and lesbian people,” he told the Daily Mail Australia.

“I did nothing wrong. I don’t know why that happened.’ 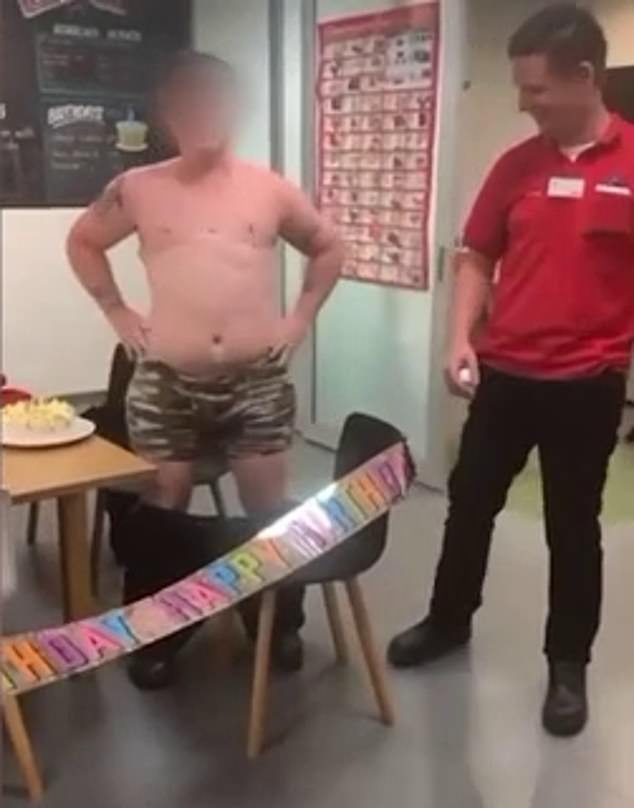 Mr. Sharma now works as a real estate agent on a commission basis and is struggling to make ends meet.

“I was number one in the state. It was my passion. I started in retail when I was 17 and it’s what I breathe. Not only is it heartbreaking — it broke everything,” he said.

Video of the incident, obtained by Daily Mail Australia, shows the employee – who appeared in Cole’s promotional photos – tearing down his countertop to reveal where his breasts were surgically removed.

With birthday bunting and cake on the tea room table, the worker then drops his pants to reveal silky animal-print boxers.

“I was a store manager and just got there but I had complaints about the transgender worker,” said Mr Sharma.

“There was video and when I saw the footage I almost fell out of my chair. I sent it to the bosses but the lawyers said they could change in the team room.

“I sent (the video) to the State Director and said: ‘I need serious help here. We talked on the phone for 43 minutes and talked about it.”

The transgender worker was immediately transferred to another shop, Mr Sharma said. He claims he was the subject of complaints from employees at the time.

This was followed by a further four written complaints from employees between August 19 and September 1, the Fair Work Commission was told.

Allegations included that Mr Sharma “made disparaging remarks about materials displayed at the store in celebration of NAIDOC week and separately in support of members of the LGBTQI community”.

Staff also claimed he fired him from work hours after leaving the store, forced him to take vacations and change shifts to adjust to his family routine.

He is also said to have made racist, homophobic and transphobic remarks towards employees after details of the complaints emerged, the Fair Works Commission heard.

But Mr Sharma says his farewell party was attended by 45 other workers who supported him and he submitted 13 letters of support to the commission from former employees.

The Fair Work Commission heard from eight Coles workers, including seven women, but the transgender worker did not testify.

Mr Sharma claims his state manager promised his job was safe after he was initially suspended – but says he was sacked two weeks later when that boss was on furlough.

The Fair Works Commission heard from eight Coles workers on Mr Sharma’s (red shirt, center) appeal against his sacking, but the transgender worker did not testify

“I’ve had awards, presentations, I’ve had a successful career,” he said.

“I got so many awards, it’s not funny. I didn’t think it was fair.”

The Fair Work Commission denied Mr Sharma’s appeal, saying: “As manager of the business, he had a responsibility to ensure his subordinates behaved in accordance with the same policies of Coles which he, on numerous occasions, seriously violated in many respects would have .

“His blatant disregard for these guidelines in his interactions with his subordinates shows that he was unfit to be their manager.”

However, the Commission found: “In relation to the performance of the business, apart from the behavior mentioned above, the applicant was generally a good manager.”

Aug 2021 – He sends his state manager a video of the transgender worker undressing. The employee is reportedly being transferred to another store

August 6, 2021 – An anonymous complaint about Mr Sharma is filed with supermarket bosses

September 17, 2021 – He will be questioned again and suspended

September 30, 2021 – Mr Sharma will be dismissed and paid without notice

August 23, 2022 – An appeal against his dismissal is dismissed by the Fair Work Commission

'For the love of science, remove the mask': Doctor asks why Biden is still wearing a mask