EXCLUSIVE: Horrific moment a truck driver drives into a flock of sheep and INSTANTLY kills dozens of animals

Shocking footage shows the moment a truck driver drove into a flock of hundreds of sheep after failing to spot the animals crossing the road in the middle of the night.

The truckie, who works for Collins Trucks Adelaide, was driving on a dual carriageway when the incident happened last Wednesday night.

The driver turns a corner before suddenly turning on the truck’s high beams, revealing the huge flock of sheep trying to cross the road. 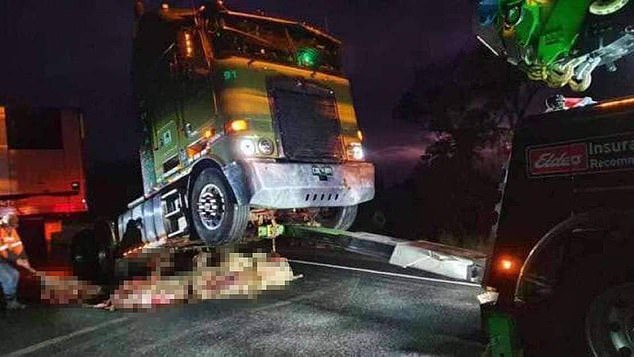 A truck drove into a flock of hundreds of sheep on a regional road in South Australia last week, killing dozens of livestock

The man slams on the brakes, but he can’t avoid crashing into more than 100 animals.

When the truck finally comes to a stop, terrified sheep that survived the incident are seen running off the road.

“It’s not often that a farmer hauls a flock of sheep at 10am at night,” a Collins Trucks worker told Daily Mail Australia.

Gruesome footage from the crime scene shows dozens of bodies strewn along the road and under the truck.

A heartbreaking photo shows a sheep standing next to the truck, looking over the bodies of its flock.

Another picture shows a worker trying to peel a sheep off the road.

A spokesman for Collins Trucks said the driver was “perfectly fine” but declined to comment on the matter.

https://www.dailymail.co.uk/news/article-11167523/Collins-Trucks-driver-ploughs-flock-sheep-Adelaide.html?ns_mchannel=rss&ns_campaign=1490&ito=1490 Collins Trucks driver drives into a flock of sheep in Adelaide