A stout Colorado undertaker has admitted to selling bodies to medical researchers and then lying to families that the remains were cremated.

Megan Hess pleaded guilty to the fraud charges at a hearing before US Judge Gordon Gallagher in Grand Junction, Colorado on Tuesday.

Despite her admission, Hess initially remained arrogant in court on Tuesday, branding the case against herself as a farce. Moments later, she admitted the allegations were true.

FBI agents found that Hess forged dozens of body donor consent forms at her Sunset Mesa funeral home, with the scammer allegedly giving a family an urn filled with concrete dust in place of their loved one’s ashes.

In court documents, a former employee said Hess made $40,000 by extracting and selling the gold teeth of some of the deceased.

She is said to have sold the remains to medical research companies and colleges, which use the bodies to educate medical and dental students.

Hess charged $1,000 per cremation — just to give away body parts to buyers, and offered free business services to poor families just to steal their remains. 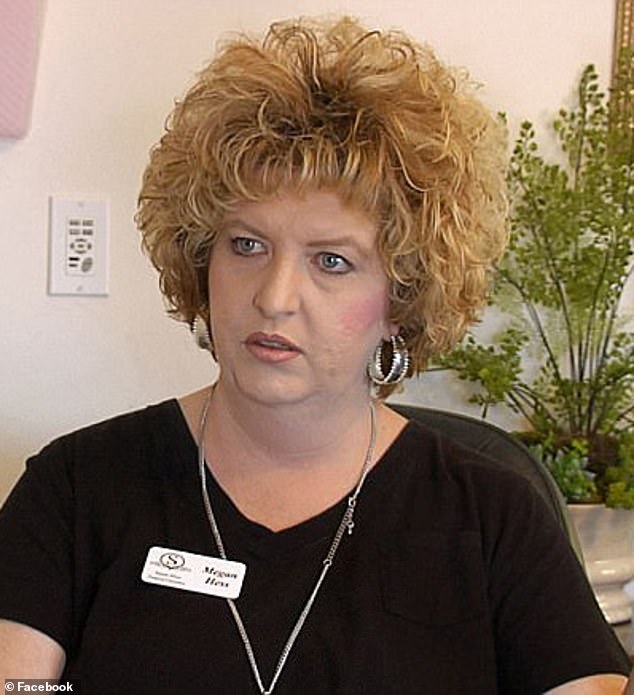 Megan Hess, 45, has confessed to illegally selling body parts without obtaining the consent of the families of now-deceased loved ones in Colorado

Hess, whose mother Shirley Koch is also accused of being a body collector, was previously accused of spending that money on a trip to Walt Disney World.

Gallagher planned for Hess, who had previously pleaded not guilty, to be sentenced in January with prosecutors asking for 12 to 15 years in prison.

Hess, 45, admitted Tuesday that through her funeral home in the western town of Montrose, she had scammed at least a dozen families who were looking for cremation services for deceased relatives.

Rather than cremate the bodies, court records show, her body brokerage firm harvested heads, spines, arms, and legs and then sold them, mostly for surgical training and other educational purposes.

Hess was due to appear in court in three weeks, along with her mother Shirley Koch, who also previously pleaded not guilty.

Hess, pictured as a funeral director at Sunet Mesa in Montrose, Colorado, could face 12 to 15 years in prison

After Assistant U.S. Attorney Jeremy Chaffin made his sentencing recommendation, Hess’ attorney Dan Shaffer requested a lighter sentence of about two years in prison. Hess has been out on bail since her arrest.

During the hearing, Judge Hess asked her to describe in her own words the crimes she committed.

Hess initially called the whole affair a “legal farce”. At the judge’s urging, Hess agreed with prosecutors that she had deceived her victims, but declined to go into detail.

At the hearing, two family members and a friend spoke of the deceased whose body parts were sold without Hess’s permission.

They told the judge they welcomed the news that Hess had decided to plead guilty while still being emotionally shaken by the episode and wanting to know more details about what happened.

To boost sales, Hess targeted poor and vulnerable families struggling with a relative’s final days, according to government court filings.

She offered them free cremations but gave out urns filled with other dusty material.

“Meeting with the hospice on the 4th … opens the floodgates for donors,” Hess wrote in 2014 to a potential body parts buyer. “They have four or five deaths a day. Getting ready!!!! …How about a deal on fully embalmed spikes…$950?”

Selling organs such as hearts, kidneys and tendons for transplant is illegal in the United States. But the sale of bodies and body parts for use in research or teaching, as Hess did, is not federally regulated.

A family affair. Hess (back right) worked at the funeral home with her mother, Shirley Koch (front left), who was also involved in the illegal trade in human body parts, and her father, Alan Koch (front right). Also pictured is Koch’s brother Alan (back left) and another family member

Hess charged families up to $1,000 for cremations that never happened, prosecutors said, and she also offered others a free cremation in exchange for a body donation. Many families received ashes from garbage cans mixed with the remains of various bodies, authorities said, and one client received concrete mix instead of a relative’s ashes.

The Reuters series uncovered the actions of Sunset Mesa and Donor Services. Former workers told Reuters of questionable practices at the facility, including dismembering bodies without the families’ knowledge or consent.

About a month after the Reuters stories, the FBI searched the compound and state regulators shut down the funeral home and crematorium. A federal grand jury indicted Hess and Koch in 2020.

https://www.dailymail.co.uk/news/article-10986301/Colorado-undertaker-admits-secretly-selling-dozen-corpses-cash-telling-relativ.html?ns_mchannel=rss&ns_campaign=1490&ito=1490 Colorado undertaker admits to secretly selling at least a dozen bodies for cash while telling a relative