A veteran entertainment reporter has claimed Michael Clarke is a “victim of domestic violence” after he was punched by his girlfriend Jade Yarbrough during a heated argument.

The former Australian Test captain, 41, was caught on camera having a foul argument with 30-year-old Yarbrough while on holiday in Noosa on January 10, forcing his good pal Karl Stefanovic and others to intervene.

During the series, Yarbrough slapped Clarke in the face and accused him of cheating on her with his ex Pip Edwards and claimed to have seen texts proving this.

Now Sunrise reporter Peter Ford has hinted that Clarke may have been a victim of domestic violence while Queensland Police investigate the brawl.

He said: “Yesterday on my social media I was stunned by the number of people who said no matter what led up there was a clear act of physical violence in which Jade punched Michael.

“Now it has to work both ways and the issue of domestic violence is a very hot topic in Queensland at the moment. 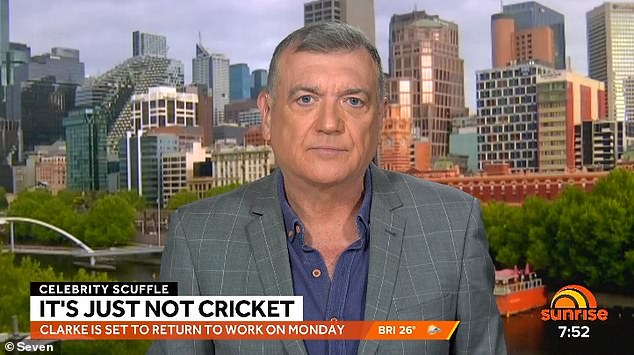 During the series, Yarbrough slapped Clarke in the face and accused him of cheating on her with his ex Pip Edwards and claimed to have seen texts proving this.

“He is a victim of domestic violence as seen on camera. So you know there’s a very fuzzy line to all of this, there’s nothing crystal clear about it.’

Ford, who also admitted “I’m not a legal expert,” said there was a possibility the incident could end in domestic violence or a public harassment charge.

However, he acknowledged that there was no complainant, making it “more difficult” to obtain a conviction, noting that Clarke had goaded Yarbrough into “hitting me” several times in the video.

“An accusation of domestic violence is very serious,” he added. “It could have consequences for everyone involved.”

Queensland Police said overnight they were investigating the riot that took place at a public park in Noosa on January 10. No charges were brought.

“Queensland Police are investigating an incident between a 30-year-old woman and a 41-year-old man pictured at Lions Park on Gympie Terrace in Noosaville earlier this month,” a police spokesman said.

“As this matter is under investigation on January 10, 2023, the Queensland Police Service is unable to comment further.”

Ford made the comments while speaking to Sunrise presenters Natalie Barr and Matt Shirvington – and they also discussed the future of Clarke’s sponsorship in light of the video and whether it violated a morality clause.

A “morality clause” refers to a provision in a contract that publicly and privately binds a person to a certain standard of conduct in order to protect the goodwill of all parties.

They are often used in contracts for athletes, actors, and media personalities.

Barr explained that these clauses are taken for granted in the entertainment world and the video of Clarke’s wild argument with his girlfriend Jade Yarbrough – which the cricketer himself described as “shameful” – could potentially “discredit a brand”.

Yarbrough is staying at Jasmine’s house, where she has spent the past two days on the phone with a “desperate” Clarke, who is begging her to take him back after he allegedly cheated on her with his ex Pip Edwards last month. (Pictured: Clarke and Yarbrough in Sydney on November 3)

How the drama unfolded as Jade Yarbrough, her sister and brother-in-law Jasmine and Karl Stefanovic and ex-cricketer Michael Clarke’s escape in Noosa ended in an ugly brawl that was caught on video at a local park

Barr noted that Clarke has essentially “advertised products for a living” since retiring from professional sports, and his latest scandal could potentially impact his deals.

Ford said he doubted anyone would “drop him immediately” since his actions in the video weren’t as bad as some celebrity scandals, and most people would understand it was “a personal issue.”

“I don’t know,” Barr replied. “You have this clause in all our contacts when you bring a brand into disrepute. And that’s a bit rubbery.’

However, her co-host Matt Shirvington suggested Clarke could avoid consequences as most of his sponsorships appear to be short-term “influencer deals”.

These tend to be “simpler” and “campaign-focused,” he said, in contrast to the longer-term contracts signed by television personalities, which often have more stringent clauses.

The Sydney Morning Herald reported that the incident has already cost him a deal with a skincare brand.

A handful of other deals are said to be “in limbo” as well, including his role as commentator for Australia’s test tour of India.

However, he will keep his radio job at Sky Sports Breakfast, station owner TabCorp confirmed to AAP on Thursday. He is expected to address the Stoush when he returns to the airwaves on Monday.

It comes as it emerged Clarke and Yarbrough had “no idea” there was video of their altercation.

According to a source close to the group at the center of the scandal, both Clarke and Yarbrough, as well as Karl Stefanovic and his wife Jasmine, had no idea their blazing row outside a Noosa restaurant on January 10 was being filmed by a random bystander.

The footage was obtained by The Daily Telegraph and it was not until a week later that Clarke was made aware of the video by a reporter from the publication.

According to a source close to the retired cricketer, the news “had exploded like a bomb” as the famous group began to realize the seriousness of what was about to be broadcast publicly.

It is understood that Clarke, Yarbrough and the Stefanovics returned to Sydney in the days that followed and a full week passed quietly before Clarke was told the incident was being taped shortly before it was made public on January 18.

“It was like a bomb went off… they all had to relive it,” said a friend close to the tight-knit group.

“His first thought was his family. And then the families of everyone else involved.

“It wasn’t just about him. This was about parents, children, partners, everything.”

Former Australian cricket captain Michael Clarke died after a night out with famed accountant Anthony Bell in Noosa on March 10.

This is how the spit unfolded:

Jade: Am I wrong? Am I fucking wrong? You damn liar. I saw everything, you called her

Jade: You told her… You bloody king keep lying to me

Jade: you keep lying You are a piece of shit

Jade: I just spoke to her. What’s wrong with you?

Jade: You fucked her on December 17th

Jasmine: Go away with Karl, go with Karl

Jade: I hate you

Clarke: Carlos [Stefanovic], I can tell you now c**t, don’t the fuck go away. She can hit me, but you, you cunt

Jade: You piece of shit

Bell jar: stop it, stop it

Jade: Oh, am I fucking wrong? you fucked her [Clarke’s ex Pip Edwards] on December 17th

Clarke: No I haven’t

Jade: you fucked her You hit her, you damn dog. I’m about to get every fucking message you’ve ever sent her.

Jade: [Quoting a message] “You are the love of my life Pip come to India

Clarke: Don’t ever speak to me again

Newcastle are considering a move for Everton striker Gordon after a £13.5million bid for Brazilian starlet Franca