By Harry Howard For Mailonline

It’s a stark image that shows how red nature is in tooth and claw.

But a photo posted by the BBC of a leopard carrying a dead baboon in its mouth – with the primate’s baby clinging in terror to its corpse, has angered some on social media.

Some users on Instagram were offended that BBC Wildlife Magazine hadn’t issued a “trigger warning” when they revealed the image, which was posted to promote the Natural History Museum’s Wildlife Photographer of the Year competition.

One wrote: “Yeah it’s nature blah blah blah but JEEEEEEZ!!! My #BlueMonday sucked enough without needing that slap in the face!!!’

Another said: “I unfollow. There’s no way you should have posted that without warning!’ 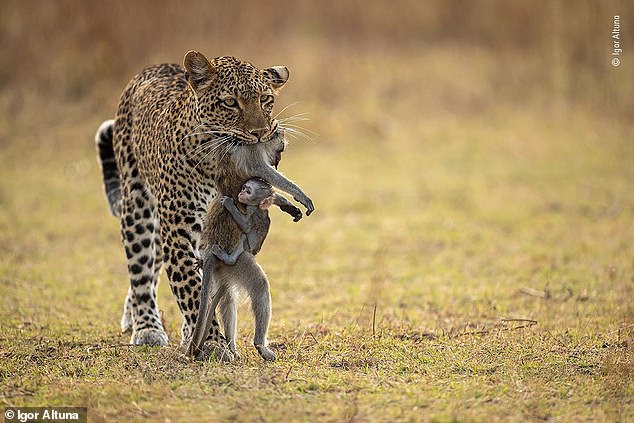 It’s a stark image that shows how red nature is in tooth and claw. But a photo posted by the BBC of a leopard carrying a dead baboon in its mouth – while the primate’s baby clutches in terror at its corpse, has angered the more sensitive among us

The photo was taken by Igor Altuna in South Luangwa National Park in Zambia.

The leopard cub played with the baby baboon for more than an hour before killing it.

In response to the BBC’s post, another person complained: “I loved seeing animals and wildlife but not the horror.

“Most of us are not used to this behavior, so there is a need to respect sensibilities and warn about the content. It’s empathy.

A fourth wrote: “I agree with many of you that this should have come with a warning first.

Some users on Instagram were offended that BBC Wildlife Magazine didn’t issue a “trigger warning” when they revealed the image, which was posted to promote a wildlife photography award shortlist

“I had a terrible day too and I’d rather have a choice in what I watch. So also unfollow.

“For those of you saying things like ‘People can’t handle anything these days/it’s brutal mother nature etc want to see things like this on the feed to add to their pain or distress.

They added: “I only follow uplifting things to balance my world. My work is sometimes hard and upsetting.

“I would have liked to have had a choice, as many others have said. There is no need to be disrespectful or ignorant of people’s daily struggles.’

However, others criticized those who complained about the lack of a content warning.

Another said: “Then don’t follow nature. Something happened! Yes, it’s a compelling image. But don’t forget the cheetah [sic] just do what is natural. It must kill to survive and likely has its own young to feed.

One wrote: “Amazing shot. Also amazed that people feel the need to comment that this picture needs a “warning”. It’s neither graphic nor tasteless, it’s reality.

“This is nature, and nature is as brutal as it is beautiful.

“BBC Wildlife is a publisher that shares nature media, and this photo documents a rare and incredible moment…in nature.

If you can’t handle this photo, then by all means don’t go on safari.”

The image was posted to promote the Wildlife Photographer of the Year 2022 – People’s Choice Award competition.

There are a total of 25 shortlisted images chosen from 38,575 submissions from around the world.

The competition began in the 1960s and was first organized by the BBC magazine Animals, now called Wildlife Magazine.

The competition grew in popularity and by the mid-1980s had partnered with the National History Museum, which now runs the competition and accompanying exhibition.

https://www.dailymail.co.uk/news/article-11643751/Complaints-lack-trigger-warning-BBC-posts-image-leopard-carrying-dead-baboon.html?ns_mchannel=rss&ns_campaign=1490&ito=1490 Complaints about the lack of a trigger warning after the BBC posted a picture of a leopard with dead baboons