Coffin confessor Bill Edgar has delivered many messages that have led to uncomfortable funerals, but his latest endeavor has elicited only responses of love and gratitude, earning him a seven-figure payday.

Mr. Edgar, whose unique job it is to interrupt funerals to deliver final messages from the deceased that they were unable to divulge while alive, has discovered another of his “afterlife” ministries.

“I have delivered gifts, flowers and alcohol from the deceased to their loved ones on anniversaries or birthdays,” Mr Edgar told Daily Mail Australia. 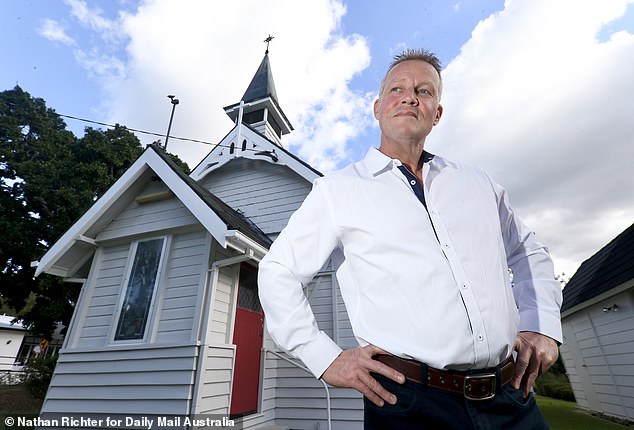 Coffin confessor Bill Edgar (pictured)’s job is to disrupt funerals and reveal secrets the deceased couldn’t share while they were alive, but now he’s added a new ministry

“It’s become a service because people just keep asking for it and requesting it.

“The reaction is beautiful. They were all really special, just heartwarming.”

Recently, Mr Edgar delivered flowers and a card with a gift certificate for an Airbnb vacation to a husband who lost his wife six months ago.

“They wanted to spend a week at Airbnb but they just couldn’t get there because she had cancer,” Mr Edgar said.

“She paid for everything for him to do the trip, the tours and the whole bunch.

“He felt like she still wants me to go.”

Mr. Edgar’s unique job started out as a “joke” but has made him famous around the world with film and television deals

In return, Mr. Edgar received a loving letter of thanks.

“To say I was surprised is an understatement, it was very unexpected but I know my wife and thinking about it I shouldn’t have been so shocked,” the man wrote.

“The overwhelming emotions ran through me like a freight train and the thought that she thought about me as much as I did brought me to tears but with a smile on my face.

“Having her organize a gift for the afterlife is beautiful and the Coffin Confessor to deliver her gift to me is a blessing I cannot thank you enough for.

“I hope that others will be given the same opportunity to experience what I have. Your ministry after death is undoubtedly a loving and unforgettable one.

“God bless you and may my beautiful wife RIP”

Mr Edgar said delivering gifts after death is a “completely different way of looking at everything I do”.

“I just love it, there’s nothing bad about it at all,” he said.

On special occasions, Mr. Edgar has delivered gifts and messages from customers who have passed away to loved ones, or simply to say, “Thinking of you”.

“I went to a lady’s door and when she answered I said, ‘I am the coffin confessor, your husband arranged this before he died.’

“And she just broke down, it was a joyful breakdown.

“A lot of people feel that someone who has died is still in their heart and in a way it takes them with them.”

Mr. Edgar says gifts after death don’t have to be for special occasions.

“I personally think they should just do it once and let them go, you don’t want to be stuck with it forever.

“You don’t want to be reminded of a gift or anything like that forever, so I think a one-time gift is probably nice.”

Mr. Edgar was beginning to think he could start doing gifts and afterlife deliveries as a business.

“I spoke to some lawyers and they said, ‘There’s no such thing in the world, you seem good at making things up like that, so I did it,'” he said.

While Mr. Edgar, who lives on the Gold Coast, has no intention of expanding the ministry in Australia, he received a surprise offer from America.

“This guy Chad Whitman, who’s a pretty successful businessman in Texas, said, ‘Listen, I have to get involved, how can I get involved?'” Mr Edgar said.

“And I said, ‘I could license you the idea and the intellectual property,’ and he said, ‘Let’s do it, I have to have it.’

Mr Edgar was not at liberty to reveal what he was paid to inspire the Afterlife Gifts and Delivery Service, which launches in the US this week, but said it was a “seven figure sum”.

A Texas businessman was so taken with Mr. Edgar’s service of delivering gifts from deceased customers to loved ones that he launched a service in the United States to do so

The first coffin confession began as a joke but turned serious when Mr Edgar was asked by a dying man to confront his best friend, who was delivering the eulogy, with evidence of his sleazy behavior towards the deceased’s wife.

Mr Edgar has done that and throughout his career as Coffin Confessor he has also told assembled bikers that the feared enforcer who is leaving was gay and loved another outlaw motorcyclist in the crowd.

He also once threatened to take a corpse from a church service because the deceased was a self-confessed atheist and had on other occasions revealed warlike infidelities or secret sexual orientations to shocked mourners.

These exploits have led to Hollywood calling and a Coffin Confessor film starring comedy superstar Marlon Wayans in the works, while Mr. Edgar will make a cameo.

Mr. Edgar once interrupted a motorcyclist’s funeral to announce to the assembled outlaw motorcyclists that the deceased man was gay and loved another club member in the crowd

There is also a potential TV show in the US where Mr Edgar is also being approached to work with a UK TV producer who has worked with English comedian Ricky Gervais.

From what started as a joke to confront an unfaithful best friend, The Coffin Confessor grows into a global franchise.

“The doors just keep opening and I just keep going through them and the money just keeps coming,” Mr Edgar said.