NBC analyst Tony Dungy has humbly apologized after posting a sarcastic tweet that sparked a spate of insults at the transgender community on social media.

The controversial former NFL coach-turned-TV star responded to a Daily Wire video about plans to put menstrual products in boys’ schools’ bathrooms because “not all students who are menstruating are female.”

In response, Dungy posted a tweet that read, “This is nothing. Some school districts place litter boxes in the school restrooms for students who identify as cats. It is very important to respond to each student’s needs.’ 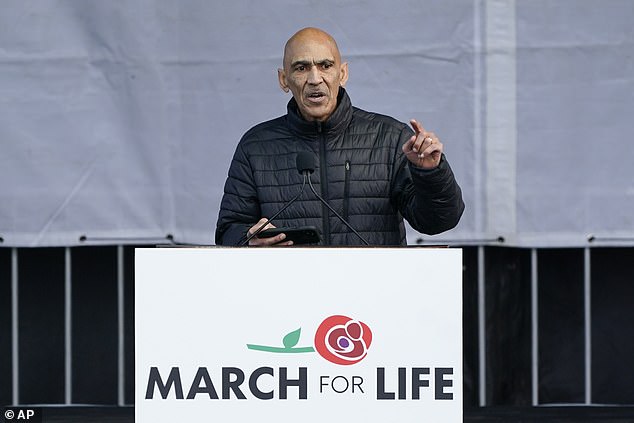 Tony Dungy, pictured at a rally in Washington on Friday, has apologized for the controversial tweet

In his tweet, which sparked much controversy, he joked that schools are also adding litter boxes

The tweet drew a huge reaction, with some users slamming Dungy while others used it to spread anti-transgender rhetoric on social media.

Now, three days later, Dungy said he was “deeply sorry” for his now-deleted post and admitted he “acted in the wrong way”.

The full apology reads: “In the past week I posted a tweet which I subsequently deleted. I apologized but not everyone saw it. So I’m posting my apologies here.

“As a Christian, I want to be a force of love for everyone. A power for healing and reconciliation – not for hostility.

“I saw a tweet yesterday and responded to it incorrectly. As a Christian, I should speak in love and in a caring and helpful way. I failed to do so and I am deeply sorry.”

Despite the controversial tweet, Dungy appeared on Saturday as part of his team of analysts at NBC

Despite widespread public outrage, Dungy will remain on air for NBC’s NFL playoff coverage Saturday, with bosses opting to keep him on the list.

Dungy has previously caused controversy with his views on abortion, speaking at a pro-life rally in Washington yesterday.

In his speech, he used Damar Hamlin’s cardiac arrest and America’s shocked reaction to raise awareness of abortion, telling the crowd, “Every day in this country, innocent lives are at stake. The only difference is that they are not owned by a famous athlete and are not shown on national television.”

Hilaria Baldwin criticized her Spanish accent as "beyond the offensive".