Police in Tennessee have ‘detained’ a man and located the car being sought in relation to the kidnapping of Memphis billionaire heiress Eliza Fletcher.

Authorities have not released the identity of the person who is in custody.

The new development came hours after Fletcher’s husband, Richard ‘Richie’ Fletcher III, was seen outside their family home with others.

Speaking exclusively to DailyMail.com, a spokesperson for the Memphis Police Department said that investigators were still working to verify if the male who has been detained is related to the case. The spokesperson said that that there is no press conference planned for Saturday evening.

On Friday, police had searched a park near the site where a wealthy heiress was abducted and forced into vehicle, as they search for clues in the baffling case.

Eliza Fletcher, 34, was last seen about 4.20am on Friday, when she was jogging in Memphis and a man approached her and forced her into an SUV after a brief struggle, police said.

On Friday night, deputies with the Shelby County Sheriff’s Office spent several hours searching a wooded area of Overton Park, a vast greenspace less than 1.5 miles from where Fletcher was abducted.

The search was called off without result as darkness fell, and investigators were reportedly looking into a tip connected with the abduction case, according to WREG-TV.

Late Friday, state police said that the suspect vehicle in the case was a dark-colored GMC Terrain, issuing a blurry surveillance image of the SUV speeding away from the crime.

Meanwhile, state and local police along with the FBI were seen searching Fletcher’s Memphis home, which she shares with Richie Fletcher, 39, her husband of eight years and their two children. 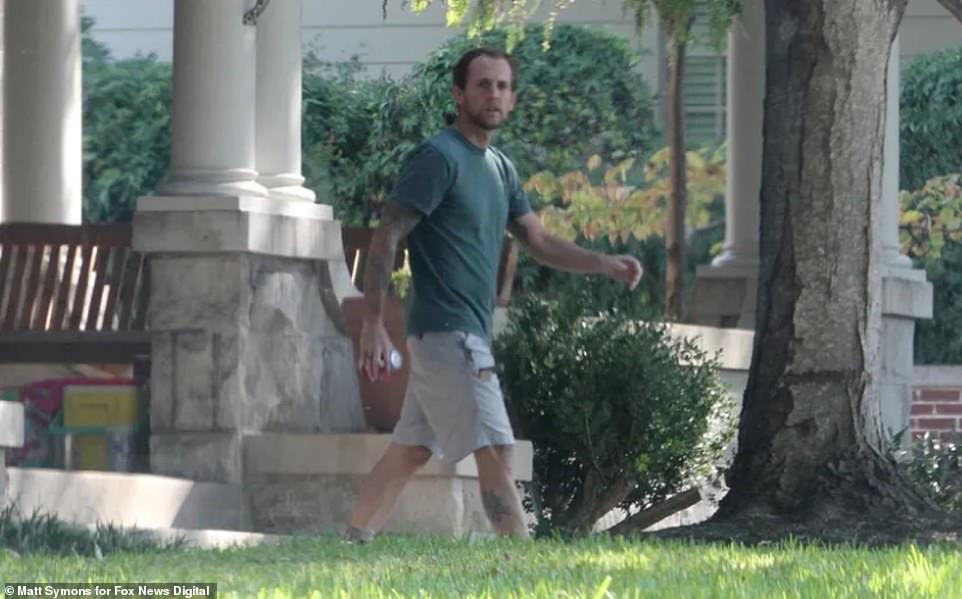 This is the SUV cops say abducted Fletcher, identified as a dark-colored GMC Terrain

Eliza Fletcher, 34, (left) was last seen about 4.20am on Friday, when she was jogging (right) in Memphis and a man approached her and forced her into an SUV after a brief struggle, police said

Media gather on Friday night as deputies with the Shelby County Sheriff’s Office spent several hours searching a wooded area of Overton Park, a vast greenspace less than 1.5 miles from where Fletcher was abducted

As the search continues, reporter Melanie Moon tweeted that Richie had ‘reportedly lawyered up.’

Investigators were also seen to label a pair of garden shears and a computer as evidence. A large police presence remained at the family home all evening.

Fletcher, who goes by Liza, is a pre-kindergarten teacher at St. Mary’s Episcopal School.

She is heiress to a family fortune from Orgill hardware company, which her grandfather founded, though the family’s net worth is unclear.

Fletcher´s family offered a $50,000 reward Friday night through Crimestoppers for information leading to the arrest of anyone responsible for her disappearance.

‘We look forward to Eliza’s safe return and hope that this award will help police capture those who committed this crime,’ Fletcher´s family said in a statement.

Members of law enforcement work the scene where Eliza Fletcher, 34, is believed to have been kidnapped around 4:30 a.m. on Friday, near the corner Central Avenue and Zach H. Curlin Street.

She was reported missing when she did not return home from her regular morning run, and her cellphone and water bottle were discovered in front of a house owned by the University of Memphis, authorities said.

In a tribute article published in the Memphis Commercial Appeal in 2018, a friend of Joe Orgill III referred to him as being a cross between Bono and Mr. Rogers in hardware circles. An apparent reference to his philanthropic activities and warm demeanor.

In announcing the reward money in Fletcher’s case, the family said in a brief statement: ‘We look forward to Eliza’s safe return and hope that this award will help police capture those who committed this crime.’

In February, Fletcher said in an Instagram post that she attended the Orgill trade show in Orlando, Florida.

Fletcher is a pre-kindergarten teacher at St. Mary’s Episcopal School and she and her husband belong to the Second Presbyterian Church in East Memphis.

Students at the school were reportedly told via letter on Friday that a teacher had been kidnapped.

‘We have not told our younger students about Mrs. Fletcher. We are supporting the older students as they learn of this news,’ read the letter from head of school Albert Throckmorton, according to Fox News.

Fletcher is with her husband of eight years, Richard ‘Richie’ Fletcher III. The couple have two children together

Richie, who has reportedly retained a lawyer, works at a company named Venture Libre, a business that makes ‘bespoke custom storage solutions for adventure vehicles.’

In 2021, a Facebook post on the school’s page referred to Fletcher as a person whose ‘smile brightens every room she enters.’

It went on: ‘She is a caring and passionate teacher who is always looking for creative ways to teach to all learners.’

The post concluded: ‘She knows each student individually and does whatever she can to excite them for learning. You will always find her celebrating big and small successes in the classroom.’

She attended Hutchison School in Memphis, graduating as part of the class of 2006. Fletcher is a graduate of Baylor University, graduating with a degree in exercise and sports science. She received her master’s in teaching from Belmont University.

Prior to working at St. Mary’s, Fletcher taught at the Promise Academy in Nashville and was also the school’s soccer coach.

She was a seasoned runner who qualified for the Boston Marathon. In 2019, Fletcher finished the St. Jude marathon at time of three hours and 26 minutes and finishing 22nd overall.

Law enforcement have not yet disclosed a potential motive or whether they believe Fletcher was abducted by an opportunistic predator or by an individual who had studied the young mom’s frequented running route.

A helicopter passes over the scene where Eliza Fletcher, 34, is believed to have been kidnapped around 4:30 a.m. on Friday

People gather outside the home of Eliza Fletcher on Friday. Police say Fletcher was jogging near the University of Memphis when she was forced into a dark-colored SUV

She was taken close to the University of Memphis. A student at the school, Sam Sparrenberg, told WREG: ‘Me and my buddy were probably one the first to see the police cars come out but we had no idea.’

4.20am: Fletcher is forced into an SUV after a struggle with a male assailant

Moments later: A dark GMC Terrain is seen speeding away from the site of the abduction

7am: After Fletcher fails to return from her run, someone notifies the Memphis Police Department

That afternoon: Cops and FBI search the home Fletcher shares with her husband and their two children. The family vehicle, a Jeep Wagoneer, is towed away and cops mark a computer and shears as evidence.

That night: Sheriff’s deputies search a wooded area of Overton Park, reportedly acting on a tip in the case. They leave without appearing to find anything.

In 2014, Fletcher married Richard ‘Richie’ James Fletcher III in a lavish magical woodland-themed ceremony detailed in Memphis Magazine. The bride is described in the profile as being ‘outdoorsy, athletic, and warm.’

According to posts on his Instagram page, the family took a lengthy vacation in early August.

The senior pastor at the church attended by Fletcher and her husband, George Robertson, described the missing woman as being ‘full of life,’ according to the Memphis Commercial Appeal.

Robertson went on: ‘She and her husband Ritchie are both very active and great leaders in our congregation. They have two little boys who have come up to me every week and give me a hug.’

He continued by saying: ‘She and her husband are both just inspirations in the sense of their zest for life and love of running and athletics.’

Robertson also said that the couple have a ‘deep and profound trust in Christ.’ He said: ‘That is Ritchie’s trust right now.’

The Second Presbyterian Church said on their Facebook page that the church was open all day for prayer.

Speaking to WREG, a friend of Fletcher’s, Hart Robinson, said: ‘You don’t wanna hear that that’s going on. We want to find her.’

Robinson also said: ‘We don’t know what’s going on, but everybody is desperately looking for her and the police here are on it. You can see there is a lot of activity, so if you know anything or saw anything early this morning, we just ask that you come forward.’

In March this year, Richie marked the couple’s anniversary in an Instagram post in which he wrote: ‘[Eight] years in the making with this smoking hot babe. Wouldn’t want it any other way. Even if the stomach bug is running through our family.’

A year earlier, he wrote on Instagram: ‘Yesterday marked 7 years married to this beauty!’

He added: ‘If you were to ask us at year 3 if we would make it to 7 we probably would of said NO! We apparently weren’t given the memo that a healthy marriage is not going to come easy. Luckily, we put God/Recovery first, we were both willing to believe in each other, and asked for help.’

He continued: ‘We are so thankful for individual counseling, couples counseling, recovery and friends! We can honestly say we wouldn’t have it any other way!’

Records show that Richie has multiple arrests for alcohol related offenses including public drunkenness and driving under the influence.

No suspects have yet been identified, though police have identified the kidnapper as being male.

According to publicly available safety data on the city’s website, there have been at least 100 incidents classified as kidnappings that have occurred this year in Memphis.

A $50,000 reward has been offered for information leading to Eliza Fletcher’s safe return. Anyone with relevant information is urged to call or text Memphis CrimeStoppers anonymously at 901-528-CASH (2274).

Thomas Markle hits out at the Duchess of Sussex's claims, saying Meghan threw people 'under the bus'

Gwyneth Paltrow: Turning 50 is a breeze compared to 40