Many wage earners like the abolition of the IRS and the streamlining of America’s Byzantine tax system.

Having 10 percent more in the bank at the end of each month sounds even better.

Financial experts told DailyMail.com these were two big wins in a tax plan pushed ahead in the Republican-led House of Representatives last week.

The GOP’s Fair Tax Act would eliminate income taxes in favor of an excise tax on services and the purchase of new cars, clothes and computers. A “prebat” would offset the cost of essentials like groceries, meaning poorer households would not be affected.

Without income taxes, consumers would spend more and the rich could build new factories and other infrastructure, boosting the economy and benefiting everyone, say the plan’s backers.

But critics warn that the plan would require phalanxes of new collectors in state capitals, hurt the middle class, increase the deficit and never make it past a Democrat-led Senate. 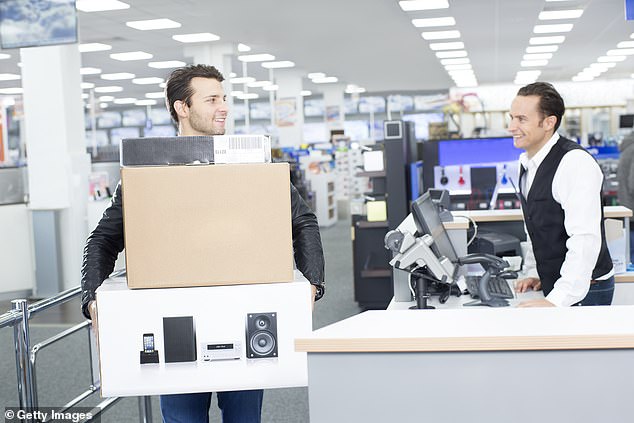 A customer leaves a store with his new sound system. Under new tax proposals, consumers could expect to pay 30 percent more when making a purchase

Filing taxes in the US is more expensive and time-consuming than in other rich countries – Americans spend 2.6 billion hours and $209 billion a year on it

“If you eliminated the income tax and replaced it with an excise tax, incomes would increase by about 10 percent over the long term,” Edwards said, based on estimates from previous versions of the plan.

“You would need a much less intrusive tax agency to collect sales taxes than the current income tax collection system, which gives the government and IRS far too much power to invade your personal affairs.”

Republicans last week unveiled plans to abolish the IRS entirely by simplifying the tax code and replacing the national corporate, income and other taxes with a single consumption tax.

A separate bill aims to reclaim $72 billion of about $80 billion in additional funding Democrats gave the IRS at last Congress, much of which is expected to hire 87,000 new IRS agents.

Proponents of a consumption tax argue that the system allows Americans to choose how much to pay in taxes by choosing how much to spend — thereby incentivizing saving and investing.

Georgia Republican Representative Buddy Carter introduced the Fair Tax Act last week, which he says would completely eliminate the need for an IRS by simplifying the tax code

The dreaded tax season begins on January 23, when the IRS begins accepting and processing individual tax returns for 2022

“New investment is the crucial seed of the economy,” said Edwards. A sales tax could free up funds to build new factories, infrastructure, and create new jobs that bring benefits to all Americans.

But John Buhl, an analyst at the Urban-Brookings Tax Policy Center, says the excise tax could well put average Americans worse off — salaries may be tax-free, but the new sales tax could send box office prices up by a third.

Even with the tax plan’s “prebate” — a monthly allowance for buying basic groceries — the GOP’s plan is still “more regressive than the current tax system” and would hurt millions of working families.

The prebate would protect the poorest households from poverty, but middle-income families would suffer a net tax increase, while “wealthy taxpayers would see a pretty substantial tax cut,” Buhl told DailyMail.com.

Garrett Watson, an expert with the Conservative Tax Foundation, hailed a “step in the right direction for a growth-friendly and simpler tax code” but stressed the downside that it was “much less progressive than under current law”.

Retirees and students would suffer, he said, as they would benefit little from the income tax abolition while being hit hard by a sales tax on the order of 30 percent.

Abolishing the IRS for a national sales tax would be “costly and difficult,” he added. Instead of a lead tax agency in Washington DC, the plan called for the administration to be reduced to 51 distinct entities.

Some also worry that Republicans haven’t balanced the books. The Congressional Budget Office estimated the bill would add about $114 billion to the deficit.

While the public may be interested in firing tax collectors, recent polls by Navigator Research show they also support last year’s Inflation Reduction Act — the Democrat bill that funded the IRS expansion.

Support for the $80 billion in additional IRS funding rose to 61 percent as pollsters said the money would help “crack down on wealthy tax dodgers.”

Filing taxes is more expensive and time-consuming than in other wealthy nations — Americans spend 2.6 billion hours and $209 billion a year doing it, according to an estimate by the American Action Forum.

Buhl called the bill a “messaging exercise” for Republicans to announce a decades-old plan that has little chance of passing. She will fight in the Senate, where Democrats lead by a 51-48 majority.

https://www.dailymail.co.uk/news/article-11640405/Could-national-sales-tax-grease-economy-raise-incomes-10-hurt-middle-class.html?ns_mchannel=rss&ns_campaign=1490&ito=1490 Could a national sales tax grease the economy and boost incomes by 10% – but hurt the middle class?