Ukraine’s spy chief last night claimed that a coup to remove Vladimir Putin is already under way and that Russia would lose the war by the end of this year.

Major General Kyrylo Budanov, 36, said he believed a turning point in the conflict will come later this summer and will eventually see Putin ousted from office.

‘The breaking point will be in the second part of August,’ General Budanov told Sky News.

‘Most of the active combat will have finished by the end of this year. It will eventually lead to the change of leadership of the Russian Federation. This process has already been launched.

‘As a result, we will renew Ukrainian power in all our territories.’

It was also claimed yesterday by an unnamed Russian oligarch that Putin is ‘very ill with blood cancer’.

The oligarch – who has close ties to the Kremlin and named only as ‘Yuri’ to protect his identity – claimed a number of the health problems Putin is believed to be suffering from are linked to him having blood cancer. 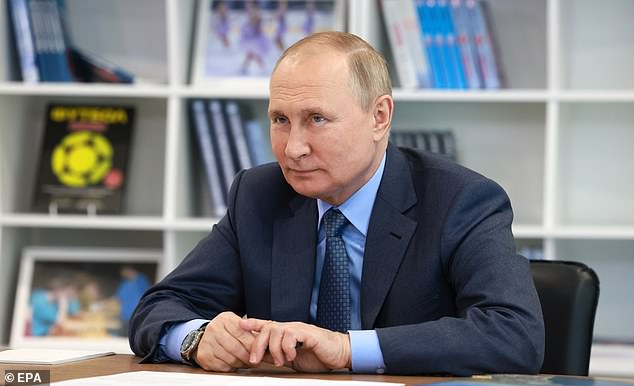 A damaged Russian tank near the village of Mala Rohan, near Kharkiv. Major General Kyrylo Budanov, 36, said he believed a turning point in the conflict will come later this summer

A destroyed Russian helicopter near the village of Mala Rohan, near Kharkiv, Ukraine. General Budanov’s comments are the most upbeat assessment given by any Ukrainian official since the war began

Vladimir Putin is ‘very ill with blood cancer’, a Russian oligarch has claimed according to a new report, amid on-going speculation about the strongman’s health. Pictured: Putin is seen clutching a small desk during a meeting with his defence minister Sergei Shoigu

General Budanov’s comments are the most upbeat assessment given by any Ukrainian official since the war began.

But the Ukrainian head of military intelligence was one of the few top officials to correctly predict Russian troops and tanks would pour over Ukraine’s borders to try to seize its territory.

However, in a rebuke to Russia’s claims of military prowess, he branded Moscow’s army ‘a horde of people with weapons’, adding that ‘this highly publicised Russian power is a myth’.

General Budanov also claimed Putin, 69, is in a ‘very bad psychological and physical condition’, saying that he is suffering from cancer and other illnesses.

His health has been the subject of speculation this year, with his face becoming visibly puffy from what has been described as steroid use to treat one of his conditions.

The speculation comes as an audio recording of an oligarch – named only as ‘Yuri’ – was said to have been obtained by a Western venture capitalist and shared with New Lines magazine.

In it the oligarch reportedly made a number of claims concerning Putin’s health, highlighting him suffering from lower back problems as evidence of his condition. Putin underwent surgery on his back in October 2021.

It has also been claimed that Putin is suffering from Parkinson’s disease. He was shown awkwardly walking through Red Square during this week’s Victory Day parade.

The magazine said it was able to authenticate the oligarch’s identity and voice, but would not reveal their name because of repercussions he could face for criticising Putin.

Putin has been seen in public less frequently than normal, and when he is shown on television, his appearances are heavily curated.

But despite the Kremlin being scrupulous with what footage of Putin is released to the public, there have been a number of signs that he is unwell.

On Monday, Putin gave a speech during Moscow’s Victory Day parade – an annual event Russia celebrates to mark the end of its involvement in the Second World War.

Putin was shown awkwardly walking through Red Square – possibly to hide a limp. He was also seen with a blanket across his lap as he watched the proceedings, despite Moscow that day being a relatively mild 48 Fahrenheit (9C).

On April 22 he was seen meeting defence minister Sergei Shoigu, slumped in his seat at a comically small desk which he gripped like a vice for the whole conversion.

In March, having delivered a speech at a large pro-war rally in Russia’s capital, Putin was filmed walking down a short flight of stairs putting more weight on his left leg.

His right hand – the same that gripped the desk in April – has been shown shaking, while he was also seen clutching the armrest of a chair during a meeting with Belarusian dictator Alexander Lukashenko.

In the build-up to the invasion of Ukraine, he held meetings with world leaders and other Russian military officials sat at either end of huge banquet-sized tables amid reports he was taking extra precautions over Covid-19.

Individuals meeting Putin were required to be tested rigorously for Covid-19.

Blood cancers – such as lymphoma or myeloma – are a cancer of plasma cells, and can cause pervasive bone disease.

Speaking to New Lines, Ashley Grossman – a professor of endocrinology at Oxford University – said such diseases can affect the spine and back.

What’s more, treatment for such diseases involve steroids, which can result in a puffy face, and chemotherapy, which results in hair loss.

Putin is not known to be suffering from hair loss, but other blood cancers like Myeloma tend to not require chemotherapy.

Myeloma can, however, lead to a compression in the spine.

Treatments for such types of cancer also weaken a patient’s immune system, which could go some way to explaining Putin’s cautious approach to Covid distancing.

The type of blood cancer Putin might be suffering from was not specified by the oligarch, who was secretly recorded by the unnamed venture capitalist.

However, it was evident that ‘Yuri’ hold a level of disdain for Russia’s leader.

‘[Putin] absolutely ruined Russia’s economy, Ukraine’s economy and many other economies — ruined [them] absolutely,’ the oligarch said, according to New Lines. ‘The problem is with his head. … One crazy guy can turn the world upside down.’

He decried Putin for saying he was ‘trying to find Nazis and fascists’ as a pretext to invade Ukraine, and went on to say ‘we all hope’ the Russian leader dies of cancer, or from an internal hit-job by those closest to him.

Yuri said he holds Putin personally accountable for the deaths of ‘more than 15,000 Russian soldiers and 4,000 or 5,000 civilians in Ukraine. It’s unbelievable. For what? He killed more people than in 10 years in the [Soviet] Afghan war.’

The magazine said it was able to authenticate the oligarch’s identity and voice. The publication said it would not reveal the name of the oligarch because of the repercussions he could face for criticising Russia’s president.

It added that he left Russia in 2021, and that his net worth put him in Forbes’ list of Russia’s top 200 wealthiest people. New Lines said the majority of the conversation was spent with Yuri asking how he could recover from Western sanctions.

But the magazine also said he was described by a former European security chief as being part of a close circle of 20 to 30 people the Russian leader met with in 2014, ahead of his annexation of the Crimean peninsula.

Putin was seen with a blanket across his lap as he watched the Victory Day proceedings on May 9, despite Moscow that day being a relatively mild 48 Fahrenheit (9C)

To add to speculation over his health, Putin on Wednesday missed an annual ice hockey match where he usually plays the starring role.

The Russian leader has made a habit of gliding over the ice at an annual match during Russia’s Night Hockey League National Festival in May.

But this year while Putin was ‘expected’ to take part, he instead sent a video message wishing competitors ‘good luck in their ice battles’ – despite the President being in the Black Sea report of Sochi where the match took place on Tuesday.

It is only the second time that the President has missed the game since 2012, with the first instance being due to health problems.

In May 2021, Putin boasted that ice hockey offered him longevity, and he used his appearance to scotch rumours over his health at the time.

‘You extend your life, you make it of better quality and deeper meaning,’ he said.

Meanwhile, it was reported on Thursday that body doubles have been prepared to make public appearances as Putin gets ready for imminent surgery.

The Russian president could be out of action for between two and ten days while his troops continue to struggle in the war with Ukraine.

The use of lookalikes would preserve appearances that Putin remains in full control of Russia, Telegram Channel General SVR said.

Vladimir Putin has missed annual ice hockey match where he usually plays the starring role (pictured in 2021), raising fresh doubts over his health amid persistent rumours the Russian strongman is suffering from multiple medical issues

The anti-Putin channel’s claims on his medical problems are supposedly based on ‘intelligence’ from an exiled Kremlin lieutenant-general insider known by the alias Viktor Mikhailovich.

It was also reported last week that an order by Putin to strike Ukraine or the West with nuclear weapons would be ignored by his top commanders, due to the fact that they believe he is unwell.

Many leading military and security officials as well as oligarch cronies believe Putin to be dying or gravely ill, said Christo Grozev, who is an expert on Russian affairs and is associated with the Bellingcat open source research group.

Believing that Putin could soon die, his inner circle would not risk being hauled before a modern equivalent of the Nuremberg trials for unleashing Armageddon, nor would they obey a Putin order to kill opposition foes, Mr Grozev claimed.

The Russian president placed Moscow’s nuclear forces on high alert shortly after his invasion of Ukraine began February 24, raising fears he could press the button as the war in Ukraine continues to go against him.

And amid increasing Western support to Ukraine, Putin has made thinly veiled threats hinting at a willingness to deploy Russia’s tactical nuclear weapons, which Russian military doctrine holds can be used to force an adversary to retreat.

Meanwhile, Russia has increasingly resorted to nuclear sabre-rattling as the war in Ukraine has stumbled, with state media last week issuing near-daily threats – including one to wipe out the UK and Ireland with a ‘nuclear tidal wave’.

AOC confirms she is ENGAGED to longtime boyfriend Riley Roberts