Dallas Cowboys owner Jerry Jones, 79, admitted to police that he was NOT wearing a seat belt when he crashed into a car with a brutal T-bone … before escaping unharmed

Jerry Jones, owner of the Dallas Cowboys, escaped unharmed from a serious car accident in May, although he was not wearing a seat belt.

Corresponding Police video obtained from TMZJones admitted to several officers that he was not wearing a belt when he dismantled a Hyundai using the T-Bone on May 4 in Dallas. Jones later told police the belt was buckled but behind his back and not worn properly.

Jones said he was traveling at about 70 km/h at the time of the accident and his airbags deployed in his 2013 Lexus.

The Cowboys owner went to the hospital, according to his son, but said he only suffered minor injuries. Jones told police at the hospital that he suffered a “head bump, chest bump (and) knee bump” but was “no pain now.”

Neither driver was seriously injured in the incident, and a relieved Jones said, “I’m so glad he’s not hurt.” 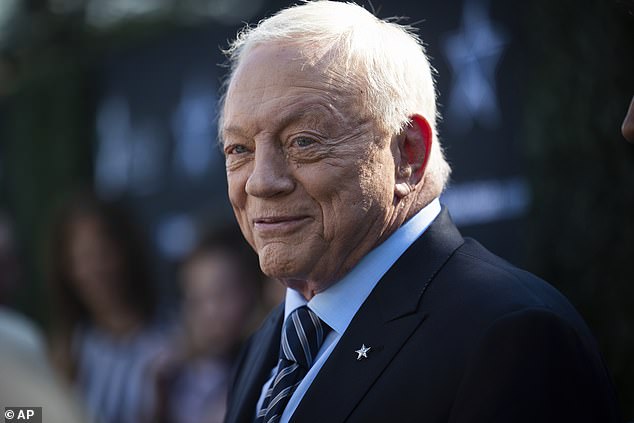 Dashcam footage of another driver waiting at a red light was captured at the moment the accident happened.

The Hyundai seems to miss the left turn it needed to make, slowing rapidly and taking a long, slow turn off what appears to be the middle or right lane of the road.

Jones’ limousine then sees the car moving too late and spreads out the Hyundai.

The Hyundai lifted off the road and spun sideways nearly 360 degrees, coming to a stop with oncoming traffic.

The footage then cuts to the parking lot of a Hyatt House hotel, which is just past the intersection, where Jones is speaking to witnesses and the driver of the silver car.

Both drivers appeared unharmed, although Jones was seen walking with a slight limp and lifting his left pant leg to examine himself.

The driver of the silver sedan could be seen putting his hand over his heart and his head in his hands, although he appeared physically unharmed.

In police video, Jones was heard saying to police, “He just got U-ed. He just U-ed right in front of me.’

Police cleared Jones of any wrongdoing in the case and asked Jones to “put the seat belt on properly.”

The Jones Cowboys open the NFL season at home against the Tampa Bay Buccaneers next Sunday.

https://www.dailymail.co.uk/sport/sportsnews/article-11181475/Cowboys-owner-Jerry-Jones-79-admitted-cops-NOT-wearing-seat-belt-hit-car.html?ns_mchannel=rss&ns_campaign=1490&ito=1490 Cowboys owner Jerry Jones, 79, admitted to police that he was NOT wearing a seat belt when he hit a car