Hiding behind masks and balaclavas, the men can be seen boasting about their crimes and sending out warnings of revenge to rivals.

The videos have been recorded within cells and on prison wings despite mobile phones being banned inside jail. They have racked up millions of views.

Some of the most successful inmates have been featured on podcasts, approached by record companies and played on BBC Radio 1Xtra. 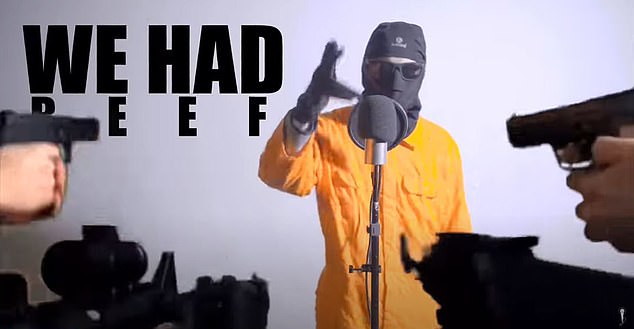 Prisoners are using smuggled phones to shoot rap videos and send warnings to rivals. Wesley Brown, 38, who is represented by a management team, has nearly 1,500 subscribers to his YouTube channel and over 326,000 views

One prisoner even had adverts from brands such as Waitrose and Netflix playing on his videos, meaning YouTube has profited from more than five million total views on his channel.

Malcolm Graham – or ‘Mazza’ as he is known online – was found with a Russian-made Baikal pistol used to kill a 17-year-old and sentenced to 11 years in jail in 2016.

With over 11,000 subscribers, the 26-year-old uploads popular videos bragging about his crimes, calling out ‘snitches’ and warning he’s ‘high risk’.

Another rising star on YouTube is 38-year-old Wesley Brown, a notorious gangster who was locked up indefinitely for the public’s protection over firearms offences.

Under the rap name ‘Wesavelli’, his threat-laden lyrics describe in graphic detail claims of shooting people and warn that he still has ‘lives to take’.

His videos, which have over 326,000 views, are filmed by a production company outside jail and feature Lamborghinis with his name on the licence plate.

Alexander Black, 32, from Birmingham began making music before he was locked up for 11 years in 2014 and has continued to do so inside with the help of a management team

Overlaid with newspaper headlines about him, he is seen in mobile phone footage rapping: ‘Been round murder since a juvi [youth], Google me.’

It is understood the Ministry of Justice has repeatedly asked YouTube to remove content uploaded by prisoners but the majority of the requests have been denied.

A former victims’ commissioner said members of the public hurt by the rappers’ crimes would be shocked to find they were able to glorify their ‘hideous violence’.

Under the rap name ‘Wesavelli’, Wesley Brown raps his threat-laden lyrics that warn he still has ‘lives to take’

Wesavelli’s videos, which have over 326,000 views, are filmed by a production company outside jail and feature Lamborghinis with his name on the licence plate

Dame Vera Baird said: ‘How is this protecting the public when they’re allowed to send out messages to impressionable young men who might well be incited into crime by it?

‘It seems to turn the criminal justice system on its head.’

The Prison Officers Association said it was aware of the scourge of inmates using mobile phones but jails were too ‘understaffed’ to tackle the problem effectively.

The videos have stayed up despite appearing to violate YouTube’s ban on violent content that could ‘shock or disgust viewers’ or incite it.

Among the rising stars is Graham, aka ‘Mazza’, whose videos have proved so popular they now play adverts from high-street brands before you can watch them.

It is impossible to work out exactly how much YouTube is profiting, but expert Alan Spicer said it would usually charge advertisers between £2.50 and £4 for every 1,000 views.

With the prisoner’s videos attracting up to 750,000 views each, it is estimated the social media giant could be earning tens of thousands of pounds as a result.

It is not known whether Graham, who earlier this month released an album on Spotify, is directly earning a share of the advertising revenue.

Alexander Black, a gangster from Birmingham who was jailed for 11 years in 2014 for a botched kidnapping

Yet, as of yesterday, adverts continued to play on the channel and underage users were still able to watch them.

A spokesman said the firm had removed videos from the channel for violating a harassment policy that bans content that threatens individuals.

The most recent, uploaded on December 8, showcases Alexander Black, a gangster from Birmingham who was jailed for 11 years in 2014 for a botched kidnapping.

The video, which has 86,000 views, is filmed in a jail cell, with inmates standing nearby smoking what appears to be cannabis and miming along as he raps into a pretend microphone made out of a black pair of socks.

Over a slow melodic beat, Black, whose rap name is KB, brags about his ‘blicky’ – slang for a gun – and of getting ‘revenge’ on enemies in prison as he makes gun signs at the camera.

Black and another inmate – Kimani Shaw aka ‘Marnz Malone’ – have both appeared on popular YouTube podcast Chop Shop.

Mazza, the 26-year-old from Liverpool has over five million views on YouTube

Speaking via a live link from prison, they claim to be doing a ‘public service’ and brag about offers of a record deal while inside.

Some of the videos are even shot outside prison by professional videographers.

One is a collaboration between ‘Mazza’ and ‘Wesavelli’, which features hooded masked men doing wheelies on quadbikes around a council estate, while others hold back menacing-looking dogs.

Both prisoners appear in the video in mobile phone footage from their cells, vividly gloating about drive-by shootings as newspaper cuttings pop up on the screen revealing their past crimes.

Wesavelli has been able to attract such a large following from prison that he is now represented by a management team and was played on BBC Radio 1Xtra last Summer.

Mick Pimblett, assistant general secretary of the Prison Officers Association, said the organisation was ‘acutely aware’ of the scourge of mobile phones in prison despite them being banned.

But the service was too ‘understaffed’ to keep it under control as one of the first tasks to ‘go by the wayside is searching’.

Devices are being thrown over the walls or dropped in from drones and, while prisoners do not have access to wifi, they are able to use 3G or 4G mobile networks.

Prison governors do have the ability to block mobile phone reception across their jails, but it is rarely used as it could affect the signal that the public gets.

Dame Vera said: ‘One would hope there would be some rehabilitation in prison to try to turn prisoners away from causing harm and behaving violently to members of the public – but this seems to be the absolute reverse.

A Prison Service spokesman said: ‘Our £100million security investment is stopping phones getting into prisons and anyone found in possession of a phone can face extra time behind bars.

‘We are working with social media companies to flag this type of content so they can remove it more quickly.’

YouTube said it recognised gang crime was a serious issue and had strict policies to ensure the platform was not used to incite violence.

But it relies on police to help spot where music videos are using slang or coded references to make threats or glorify violence. It has a dedicated process for officers to flag videos directly.

Revealed: The prisoners who have become rap stars behind bars

A notorious gangster locked up indefinitely for the public’s protection has rebranded himself as a rapper and has even been played on BBC Radio 1Xtra.

Wesley Brown, 38, who is represented by a management team, has nearly 1,500 subscribers to his YouTube channel and over 326,000 views.

Under the alias ‘Wesavelli’, his threat-laden lyrics often describe in graphic details claims about shooting people and warning he still has ‘lives to take’.

The thug – a former member of the infamous Croxteth Crew in Liverpool – is in jail for firearm offences and once accidentally shot himself during a drive-by attack in 2003.

In one video he namechecks the gang, whose deadly feud with rivals Norris Greens Strand Gang brought terror to the city and led to the murder of 11-year-old Rhys Jones.

Showing no remorse, Brown – who often hides behind a balaclava – instead glorifies the violence as he raps: ‘We had beef and they’re all dead, Wes the last man standing.

The professional-looking music videos are filmed outside prison by his team and feature Lamborghinis, Bentleys, and masked motorbike riders doing wheelies down streets.

Brown – who was caught running an illegal phone smuggling racket from inside Strangeways in 2017 – often appears in the videos, however in footage filmed in prison.

YouTube is making money from an account run by a prisoner whose lyrics boast of being caught with a gun that killed a 17-year-old boy.

Adverts from high-street brands such as Waitrose appear on Malcolm Graham’s videos before he launches into foul-mouthed boasts about his violent past.

The 26-year-old from Liverpool, who goes by the name ‘Mazza’, has over 11,000 subscribers and over five million views.

It is not known whether he earns a share of the advertising revenue, but experts have suggested YouTube could be earning tens of thousands of pounds from them.

Graham also runs a popular series on his channel called Jaily Duppy, which hosts inmates from other prisons showing off their rapping skills.

His own raps brag about his crimes, call out ‘snitches’ and warn he’s ‘high risk’. He is understood to be leaving prison soon after being jailed for 11 years in 2016.

He pleaded guilty to possession of a firearm and two counts of wounding without intent. After his arrest, detectives found footage of him test-firing a Russian-made Baikal automatic pistol that had killed a teenager weeks before.

Alenxander Black’s video, which has 86,000 views, is filmed in a jail cell, with inmates standing nearby smoking what appears to be cannabis and miming along as he raps into a pretend microphone made out of a black pair of socks

A gangster jailed for robbery, kidnap, and blackmail appeared on a popular YouTube podcast to discuss his burgeoning music career behind bars.

Speaking over a video link from jail, Alexander Black – aka KB – tells the two presenters he feels like he’s ‘doing a public service’ as he smokes what appears to be a cannabis joint.

The 32-year-old rapper from Birmingham began making music before he was locked up for 11 years in 2014 and has continued to do so inside with the help of a management team.

Music videos recorded in his cell have gained tens of thousand of views each in which he brags about his ‘blicky’ – slang for a gun – and about getting ‘revenge’ on enemies in prison.

In 2018, Blake received a further seven years for his part in organising delivery of a short-barrelled shotgun for a gang-related crime outside prison.. He did so using a contraband mobile phone.

Two years later he appeared live from prison on the Chop Shop podcast on YouTube. In a ‘special’ episode, he discusses how releasing a video is a ‘win’ for everyone in the jail.