The tennis world had a visceral reaction after videos circulated on social media following a US Open qualifying win.

After that Watson win, cameras filmed two men – identified as Bejlek’s father and trainer celebrating with her.

As the cameras lingered, both men were seen patting her bottom while her father appeared to kiss her on the mouth. 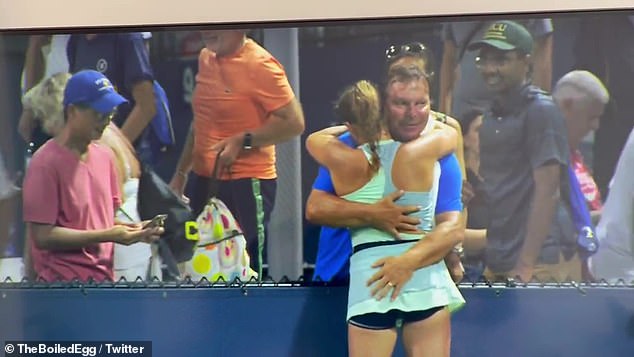 After the win, Sara Bejlek celebrated with her father Jaroslav, who appeared to be patting her bottom

After celebrating with her dad, the young tennis star then moved down the line to join her coach

While social media urged the WTA to investigate the incident, Bejlek shared her thoughts on the incident.

“Of course I saw the video. It was a spontaneous reaction from the whole team. We were happy,” Bejlek told reporters.

“It may certainly seem uncomfortable and inconvenient to some, but we have already discussed it with the team. It will not happen again.’

The 16-year-old is pictured on Instagram alongside her father (right) and her trainer (below).

While this incident happened during her first qualifier, it gained prominence just before she faced world No. 35 Liudmila Samsonova of Russia. She lost that match in straight sets 6-3, 6-1.

Ahead of that match, she responded to concerns and criticism of the two men pictured.

“Dad is my dad and always will be. And I’ve known the coach since I was eight years old. He picks me up, he massages me,” she added.

“If something similar happened in the Czech Republic, nobody would care. But since we’re in America, everyone comments. But like I said, we talked and it won’t happen again.’

After her qualification victory, 16-year-old Bejlek posted a picture on Instagram next to her father