A father feared he had been stung on a boozy trip to a pub beer garden with friends – only to find it was a horror reaction to a fake widow spider bite when a football-sized blister rose from his leg.

Nathan Green, 50, felt the “tingling” moment when the eight-legged fiend sank his fangs into the back of his right calf while out with friends, but thought nothing of it and simply brushed the irritation away.

The manager of the towing company collapsed into bed shaking and unwell and woke up the next day feeling “like he’d been run over” – fearing he’d been the victim of a hard drink.

But when a “small football-sized” blister rose on his right calf and his leg swelled threefold 24 hours later, he was ordered by his wife Dawn Green to go to the emergency room.

There, doctors examined his bright red and swollen leg and determined it was a reaction to a spider bite.

Stomach upset photos show yellow blisters erupting on the father-of-three’s leg before doctors were forced to pierce and drain them – leaving him with a foot-long patch of rough, sore skin. 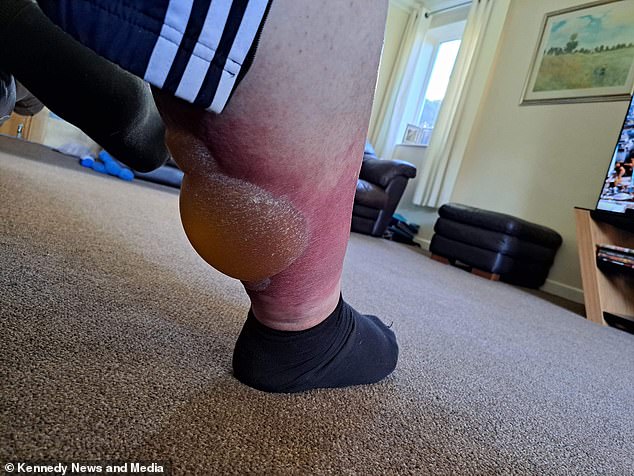 Three months after his ordeal, Nathan’s leg has almost completely healed and he is now urging people to beware of the tiny scares and seek medical help immediately if bitten.

Nathan, from Lowestoft, Suffolk, said: “You wouldn’t believe a tiny spider could do so much damage, it’s amazing.

“I’ve hopped around on boats and oil rigs all over the world and I’ve walked through jungles and swam in rivers, you name it I’ve done it and I walk into a pub and get bitten.

‘Before [this happened]if my family saw a spider i would pick it up with my hand, open the window and throw it outside, they never bothered me at all.

“But after taking a hit like that, I’m cautious.

Nathan popped into a pub’s beer garden around 4pm on Sunday June 12th and spent the afternoon with mates listening to music and drinking beers.

An hour after his visit, Nathan, who was wearing jeans and Chelsea boots, felt something on his leg but brushed it away.

When he got home at 10 p.m., he was feeling down and continued to feel ill on Monday [June 13th].

Green, 50, attended A&E at Ms Dawn Green’s request and had his bladder cut open and emptied while he was placed on an antibiotic IV drip

Nathan went to the emergency room at James Paget University Hospital in Great Yarmouth, Norfolk, on June 14, where doctors cut open and drained the bladder and put him on an IV antibiotic.

Nathan said: “I went to the beer garden on a Sunday, it’s my day off and I like to sit there and listen to the band and have a few beers.

“It was a hot day and I was out in the garden enjoying myself and chatting with my buddies.

“I felt something go up and tickle my leg a bit, so I brushed my leg like you do. I didn’t really think much about it.

“I was drinking pretty happily and when I got home I started shaking and cold. I felt really rough and I remember thinking, “This isn’t right.”

“The next morning I woke up and felt like I had been hit, I couldn’t go to work.

“I felt so bad I thought someone had pricked me. I felt really, really sick.

‘ The woman said, ‘Are you okay? You really don’t look good’.

“On Tuesday morning I woke up bright red from my knee to my ankle, about three times the size it should be and it was rock hard.

“Then I noticed this blister on the back of my leg and within an hour it had doubled in size.

“By the time I got to A&E, it had turned into a little football and every time I looked at it, it got bigger. I’m damn glad my wife made me go.

“The woman looked at it and said, ‘You were bitten by a fake widow spider.’

‘She cut open the bladder and got all that stuff out. It was 30cm by 30cm, it was a big wound.

“I was shaking because my body went into anaphylactic shock and my leg swelled up so much trying to fight what was in there.

“When they cut open the blister it felt like someone had taken a hot iron and stuck it in the back of my leg, it was that painful.

“It wasn’t the bite that hurt, it was the consequences.

“They immediately put me on an antibiotic drip, cleaned it, got dressed and told me to come back if it got worse before my follow-up appointment.”

Nathan was sent home with antibiotics and a large bandage, which soaked so quickly from the infected bite site that it had to be changed every six hours.

Considering how infected his leg was, Nathan had to come back before his next scheduled appointment to have it cleaned, redressed, and pumped more IV antibiotics into his system.

Nathan said, “They gave me a big pad, basically a big diaper, for the back of my leg.

“This thing got soaked every six hours and I had to change it.

“It kept getting worse, so I went back. They cleaned and wiped it down along with other tests and confirmed I had been bitten by a fake widow spider.

‘I told them [pub staff] and they sprayed it just in case.

“The nightmare pretty much continued for the next three weeks, but it got smaller.”

Nathan said the pain the tiny animal caused was so severe he needed co-codamol to stand and is now urging anyone who has been bitten to get medical attention.

Nathan said, “It’s up there with the worst pain I’ve ever felt, I wouldn’t wish that on my worst enemy.

“Three weeks later I was still limping around like an old man.

“The hospital said if I had left later it would have caused more damage to my leg.

“My advice to anyone who is bitten is to go and have it checked out. I’m a die-hard ‘work until I drop’ type and I’m glad my wife insisted I go to the ER.’

Venomous spiders will invade our homes and multiply over the next few weeks, experts have warned.

Brits are being urged to stock up on medicine to treat bites from fake widows – which could be deadly.

It was said spiders would move into our homes to warm up, mate and reproduce.

Among them will be false widows – our most dangerous arachnids – capable of giving a nasty bite.

The first aid organization said we had to be prepared to be able to treat them.

A St John Ambulance spokesman said: “As temperatures slowly drop over the next few weeks, more of us will see spiders coming out of the cold to stay warm and breed.

“St. So John Ambulance gives advice on what to do if you get bitten.

“While spider bite reactions are usually mild and can usually be treated at home, there has been an increase in false widow spiders biting in recent years.

“And while it’s not particularly venomous, its bite can feel like a wasp sting.

“In rarer cases, bites can be severe, causing severe swelling and irritation and an allergic reaction.

“A severe allergic reaction, also called anaphylaxis, can develop in a matter of seconds and affect the whole body.

“If not treated quickly enough, it can be fatal.”

Steve Hatton, paramedic and head of clinical operations at St John Ambulance, said Britons should ensure home first aid kits are stocked with an epi-pen – if already prescribed – or antihistamines.

He said: “Essentially, spider bites of the British variety are nothing more than an irritation to most.

“On rare occasions, however, a person will have a more severe anaphylactic reaction from an allergy to the spider venom than from the actual effectiveness of the spider venom, similar to a bee or wasp sting.”

“Others may later develop secondary complications, such as infection of the surrounding skin, which has more to do with bacteria – which are normally found on the skin – invading where the bite is or because the itchy one skin is scratched and creates a route of infection.”

Symptoms of an allergic reaction include a red, itchy rash, watery eyes, swelling of the hands, feet and face, abdominal pain, vomiting or diarrhea.

More serious ones include difficulty breathing, swelling of the tongue and throat with swelling around the eyes, confusion and agitation, collapse and listlessness.

https://www.dailymail.co.uk/news/article-11168621/Father-bitten-false-widow-spider-football-sized-blister-ballooned-leg.html?ns_mchannel=rss&ns_campaign=1490&ito=1490 Dad discovered he was bitten by a fake widow spider when a football-sized blister bulged on his leg