She’s not shy about flaunting her incredible physique on social media.

And Daisy Lowe once again showed off her sensational physique as she slipped her figure into a leopard print swimsuit shared to her Instagram account on Wednesday.

The 33-year-old model stunned in the one-piece designed by her “incredible” fashion designer mother, Pearl Lowe. 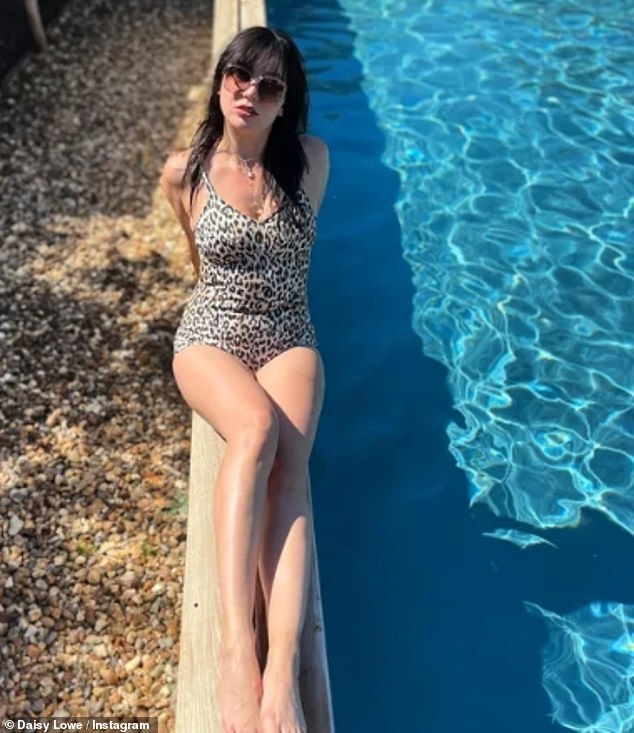 Gorgeous: Daisy Lowe showed off her sensational physique once again as she slipped her figure into a leopard print swimsuit shared to her Instagram account on Wednesday

Posing by the pool, the cover girl paid tribute to her mum’s talents and captioned the grid post, “Some of my best memories are made in swimsuits…this leopard dream is from my amazing mum @pearllowe.”

As Daisy soaked up the sun at the undisclosed destination, she wore matching oversized sunglasses while layering two silver necklaces to complement her fresh summer look.

The fashion industry personality looked relaxed and carefree, letting her voluminous locks fall down her face in a no-fuss, tousled style.

Praise: Acknowledging her mother’s talents, Daisy wrote: “Some of my best memories are made in swimsuits…this leopard dream is from my amazing mum @pearllowe.”

The snap comes after Daisy and her father Gavin Rossdale looked the picture of happiness as they posed for a family snap with the rocker’s three sons, Kingston, 16, Zuma, 13, and Apollo, eight, last month.

They had a famously “rocky start” to their father-daughter relationship, after Daisy only found out he was her biological parent when she was 15.

The fashionista posted the happy group picture to her Instagram, simply captioning the gallery “July.”

Happy family: Daisy and Gavin Rossdale looked happy as they posed for a family photo with the rocker’s three sons, Kingston, 16, Zuma, 13, and Apollo, eight

daisy also uploaded a cute selfie with her youngest half-brother Apollo as they grinned away in the back of a car.

He wrote: ‘Welcome to my world. The best of weeks at home with my better versions of me. Oh the joy they bring. And yes, bottom left is chewy. And our superhero Apollo. My love is indeed the size of an ocean.’

The family history is a bit complicated as Daisy and Gavin only found out he was their father when a 2004 paternity test revealed the truth after a one-night stand with Daisy’s mother Pearl years earlier.

Model family: The 33-year-old model also uploaded a sweet selfie with her youngest half-brother, Apollo, as they grinned away in the back seat of a car

Daisy’s formative years have told a tangled tale, after Pearl had a short-lived marriage to Bronner Handywerger, whom she met in Israel in 1988.

During their marriage, Pearl became involved in a one-night stand with musician “best friend” Gavin, who was then the lead singer and guitarist for the rock band Bush.

When Daisy was 14, she underwent a paternity test based on her mother’s suspicion that Bronner was not the father, although Gavin vowed never to speak to Pearl again once Daisy had the DNA test.

In her memoir All That Glitters, Pearl wrote that Gavin, who had been Daisy’s godfather, had a cold response to a request for a paternity test.

Pearl said, “I received a letter from him implying that I was trying to ruin his life and specifically accusing me of messing up my own.”

She added that ‘Daisy held out with Gavin after the paternity test, determined to start some kind of relationship and things got better. From time to time he would invite her to his home.”

A few years later, in 2010, Daisy told the London Evening Standard: “I have a really good relationship with my father now.

“It’s been blooming for a year, but it really happened over Christmas. We need to spend time together. He has two beautiful children who I really adore and his wife is beautiful.”

At the time, Gavin was married to No Doubt lead singer Gwen Stefani, 52, a relationship that ended in divorce in 2016.

Confused: The family history is a bit complicated as Daisy (pictured last month) and Gavin only found out he was their father when a 2004 paternity test uncovered the truth

Daisy recently said there was “no manual” for figuring out “your godfather is your father,” and admitted she had a rough start with Gavin, but they have a good relationship now.

Daisy said she and Gavin shared “the same mannerisms” and said it made “perfect sense” when she found out he was actually her biological father.

She explained, “The funny thing is that the moment I found out that he could be my father, I was like, ‘Oh, that makes perfect sense.’ We think the same way and we have so many pretty startling similarities.

“And the guy that I thought was my father, I didn’t really know, and when I met him, I came home and I said to my mother, ‘I don’t feel any connection to this man.’

“But I didn’t question it, because as a teenager I didn’t think, ‘So mom, is there anyone else who could be my dad?’ That’s just not something anyone ever thinks of.

Daisy also spoke about her close relationship with her brothers, adding: “I love them all so much. I facetime with my brothers over in LA at least once a week.

“Whenever I go to LA I always have the best time with these guys. They are such brilliant children.’

Close: Daisy recently said there’s “no manual” for figuring out “your godfather is your father,” and admitted she had a rough start with Gavin

Nurse, 60, is fired after taking Mercedes to a car wash after son shot dead rival in back seat

Is Bleach coming to Fortnite?