Australian cricketer Damien Fleming blames the end of his Test career for failing to comply with Steve Waugh’s bizarre wardrobe demand: ‘Not the smartest thing I’ve ever done’

The 52-year-old, who is now a respected media identity at Channel 7 and SEN Radio, recalled refusing to carry the wide green to Wimbledon in 2001.

Then captain Steve Waugh urged the playing group to don the iconic cap to support fellow Australian Pat Rafter ahead of the men’s singles final against Croatia’s Goran Ivanisevic.

Fleming never played another Test for Australia – and if he had time again he would follow Waugh’s instruction. 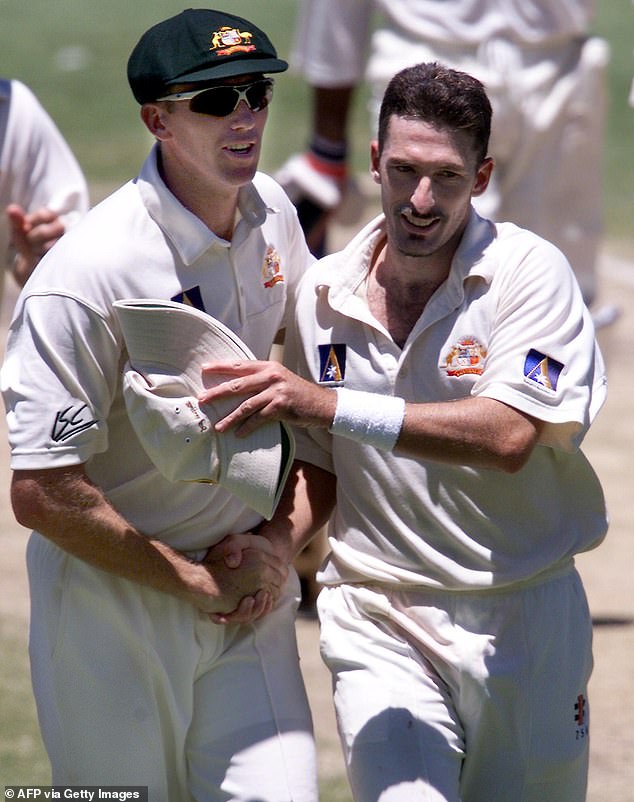 Former Australian fast bowler Damien Fleming (pictured right, with teammate Glenn McGrath) has pinpointed the moment he feels his Testing career is over

“Not the smartest thing I’ve ever done,” he told news.com.au.

“One by one as we passed through [at Wimbledon] there was a tremendous roar.

“But Steve Waugh wasn’t happy that not everyone wore the baggy green – there must be consequences.

“You can’t drop Shane Warne. He can’t drop Mark. Somebody has to go, and that’s the big-nosed Victorian.’

Warne later singled out “Tugga” Waugh for his “ridiculous” devotion to the far green cap during his playing days.

The likes of Steve Waugh, Ricky Ponting (pictured left) and Justin Langer all wore the billowy green cap at the All England Club – but not Warne and Mark Waugh (second left).

Warne later singled out ‘Tugga’ for his ‘ridiculous’ devotion to the wide green cap during his playing days (the pair are pictured in 2008).

“He (Waugh) said everyone has to wear the green baggy cap for the first hour (of friendly games).

“So we used to do that and I sat there for the first hour in that silly baggy green cap and pouted at the first slip.”