Dango Outtara will TODAY complete his medical at Bournemouth and agree to a five-year deal, while the Burkino Fasa winger completes his £20million move from Lorient – in which Cherries owner Bill Foley bought a 33 per cent stake last week

By Simon Jones and Arthur Parashar For Mailonline

The Burkino Fasa winger is set to sign a five-year deal with the club after impressing for the Ligue 1 side.

The 20-year-old is enjoying a great season at Lorient, scoring six goals in 18 league games. 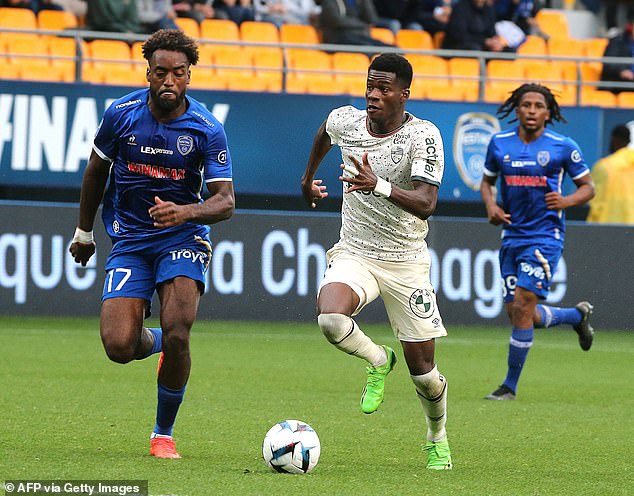 The signing comes after Cherries owner Bill Foley bought a 33 per cent stake in Lorient last week – just a month after he took over Bournemouth in a deal believed to be worth around £120million .

The Texas-born businessman is said to have bought a 33 per cent stake in the Ligue 1 team to continue investing at the end of the current season with a view to completing a full takeover in the future.

His performances had attracted the interest of numerous Premier League sides, including contenders West Ham, Southampton and Everton.

Outarra is signing from Lorient, in which Cherries owner Bill Foley bought a 33 per cent stake last week

After a poor start to the season, Cherries boss Gary O’Neil has improved Bournemouth’s fortunes and they are just a point adrift of the last three.

However, the Cherries have lost their last four Premier League games and have a crucial game against Nottingham Forest on Saturday.

Recent injuries to Dominic Solanke and Marcus Tavernier have left O’Neil short in attack, something the Cherries are now hoping to strengthen.

https://www.dailymail.co.uk/sport/football/article-11652237/Dango-Outtara-complete-medical-TODAY-pen-five-year-deal-Bournemouth-ahead-20m-move.html?ns_mchannel=rss&ns_campaign=1490&ito=1490 Dango Outtara is set to complete medical TODAY and agree a five-year deal at Bournemouth ahead of a £20million move