Daniel Ricciardo had a miserable night at the Dutch Grand Prix over the weekend but a piece of footage could give a clue as to what the Australian F1 driver is up to next year after McLaren axed him.

The Australian posted one of his worst results of the season, finishing 17th after qualifying in 18th place, but it was a clip of him pre-race that caught all the attention.

Ricciardo was recorded chatting with Red Bull driver Sergio Perez and appeared to mention the prospect of taking a year away from F1 before returning to the sport in 2024. 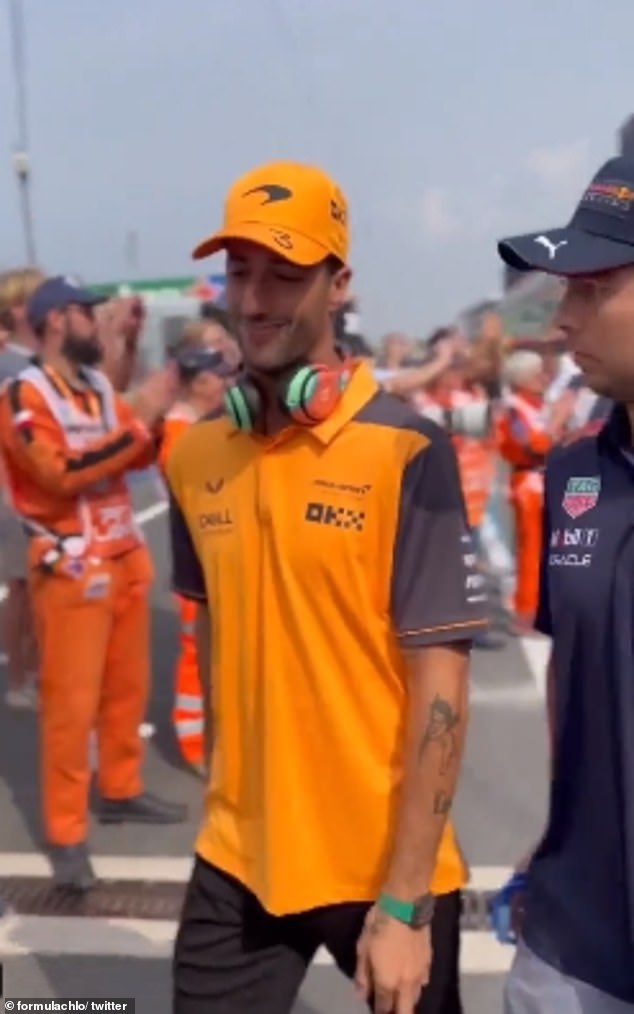 The Australian veteran recorded one of his worst results of the season at the Dutch GP, finishing 17th in a race won by Max Verstappen

There was widespread speculation that Ricciardo might find it difficult to race with a top team next season and he might not want to race for a rear marker like Williams.

Ahead of the Belgian Grand Prix, he hinted at the possibility of taking a year off if the jobs on offer weren’t to his liking, saying: ‘If the stars aren’t right and it doesn’t make perfect sense and I have to take time out for one Reevaluate, then that’s what I have to do.’

That wasn’t the only piece of pre-race footage that got F1 fans talking.

A graphic during a TV segment read “Fight Again” under Ricciardo’s name after he qualified 18th for the race.

Pre-race TV footage showed a graphic below Ricciardo’s name that read ‘Fight Again’. Many fans consider this a low blow and criticize the handling of the Australian

The labels assigned to other drivers were simpler and more polite, leading some Ricciardo fans to brand the graphic as “disgusting” and bordering on “nuisance”.

One fan wrote on Twitter: “Clearly demeaning and disrespectful of his efforts. Whoever did this must be a McLaren fan for sure.’

Another commented: “Interesting to see F1 always claim to be against toxic behavior and harassment only to be a prime example of toxicism when Ricciardo ‘fights again’.

A third said: “This is so gross… it’s not even a typo. Clearly demeaning and disregarding his efforts. Whoever did this must be a McLaren fan for sure.’

A rider of Ricciardo’s pedigree will certainly be of interest to some teams further down the grid, but looking back at his 2022 tally is hardly a compelling argument for the Australian.

He has only had four top 10 finishes in 15 races, outclassed by younger and more inexperienced teammate Lando Norris.

Still, he clinched McLaren’s only race win since 2012 – at the Italian Grand Prix at Monza – and also claimed podium finishes in a battered Renault car before his move to McLaren in 2020.

So will anyone attack him? There are several possible destinations for Ricciardo when he leaves McLaren at the end of the year.

Two years ago, a reunion with Alpine would have been thought impossible given the dark cloud from which Ricciardo left the team – then called Renault – to drive for McLaren.

But the nature of the current saga, which is engulfing the paddock, has seen an opener in the Australian’s favour.

Fernando Alonso has left the French team to drive for Aston Martin next season, replacing the outgoing Sebastian Vettel after the German ended his illustrious career.

A move for Piastri seemed the obvious choice for the Enstone team after devoting considerable resources to developing the Australian talent. However, Piastri has dramatically snubbed Alpine and will now take Ricciardo’s seat at McLaren in 2023.

That left the door open for Ricciardo and a move back to his former team wouldn’t be so embarrassing for the 33-year-old.

Aside from the name change, there were significant changes in the way the team worked – Cyril Abiteboul was replaced by Otmar Szafnauer, while Alain Prost and Marcin Budkowski also made room.

Ricciardo’s move from Red Bull to Renault was seen as a “resignation” for the Australian but with options dwindling, a move to Haas could breathe new life into the 33-year-old’s career.

After a shocking 2021 season spent in the doldrums, the American team has had a decent 2022, often showing glimpses of strong pace, with Kevin Magnussen making a solid return to the sport.

But the Dane’s performances have outlined a growing problem with Mick Schumacher. The youngster is part of Ferrari’s driver academy but has underperformed in his two seasons on the grid, which baffles Haas.

Typically a smaller team like Haas would struggle to offer a financial package that could convince Ricciardo, but if the Australian receives a sizable payout from McLaren, as expected, he may be more open to a smaller deal.

Outside of Alpine, Alfa Romeo would probably be the most attractive option for Ricciardo.

Valtteri Bottas arrived from Mercedes this season and signed a multi-year deal with the team, while rookie Zhou Guanyu was recruited from Formula 2.

It would be surprising if Alfa Romeo decided not to commit Zhou to 2023, but Ricciardo’s availability could be a head turner for the Swiss team.

Alfa Romeo recently struck a partnership with Audi for 2026 that would offer Ricciardo a long-term project to delve into alongside Bottas, although he may be wary of putting in building blocks, which will only be thrown off at age 20 36 if the deal goes through.

Ricciardo longed to be the force that once dominated the sport and could breathe new life into Williams and lead the team under its new owners.

US firm Dorilton have financially stabilized the famed team since taking over last year and are keen to sign a driver who can appeal to the growing American crowd, with Logan Sergeant heavily linked to Nicolas Latifi’s seat.

However, Ricciardo is also a popular character with American fans and would certainly add to the team’s marketing appeal.

Much like Haas, Williams would likely only be an option should Ricciardo face closed doors at Alpine and Alfa Romeo, but his arrival would make him the team’s biggest signing since Felipe Massa in 2014.

https://www.dailymail.co.uk/sport/formulaone/article-11179465/Daniel-Ricciardo-overheard-giving-HUGE-clue-future-fans-lash-disgusting-label.html?ns_mchannel=rss&ns_campaign=1490&ito=1490 Daniel Ricciardo is overheard giving HUGE hints about his future as fans lash out at the ‘disgusting’ label

House of the Dragon: Rhaenrya defies her father King Viserys by refusing to marry

Ten people, including a child, are believed dead after a seaplane crashed in Washington's Mutiny Bay