Danielle Collins exuberantly celebrates winning TOO EARLY in her third set against Karolina Muchova – as the American had to FORGET, she had to reach 10 points instead of seven in a tie-break despite the rules changing in May last year!

It was a moment of hilarity on a frustrating night in Melbourne for American tennis star Danielle Collins, who forgot the third-set tie-break is up to ten points as she battled Czech Karolina Muchova on Wednesday.

After winning the seventh point in the third set tiebreak, Collins dropped her racquet, looked up at the sky and held up her hands.

She then pressed her hands together in a gesture of thanks before picking up her racquet to shake hands with the chair umpire and her opponent. 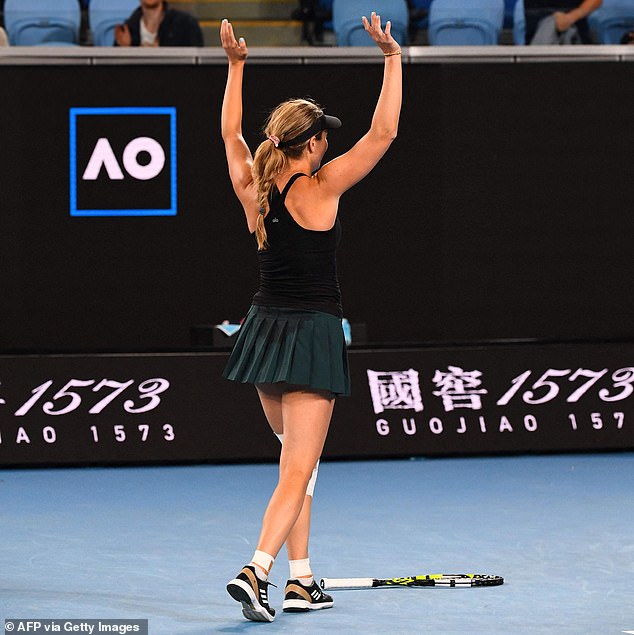 Instead, she stared at the chair umpire in confusion, unaware that she still had three more points to gain

As she slowly walked over to the chair, she was confused as the audience didn’t applaud and nobody moved.

Collins approached the chair and asked what was up when she was told she still had three points to gain.

“I felt a little embarrassed,” Collins said during the court interview. “I’ve never had to play a tiebreak in the third set of a Grand Slam.”

“I really thought it was game over. I said to myself, at least you didn’t see any plants. I had to keep things in perspective… I’m not really good with the score so maybe I need to work on it a bit.

She won that match 7-5 5-7 6-4 to advance to the second round to return to the Aussie Open final like last year.

After sending off Muchova, Collins advances to the third round to play 22-seeded Elena Rybakina

https://www.dailymail.co.uk/sport/tennis/article-11649373/Danielle-Collins-hilariously-celebrates-winning-EARLY-set-vs-Anna-Kalinskaya.html?ns_mchannel=rss&ns_campaign=1490&ito=1490 Danielle Collins celebrates the win too early in her third set against Karolina Muchova