Family members of the ISSI Beatles victims fear that one of the high-profile terrorists has negotiated a way of getting ‘easy treatment’ after being jailed for his heinous crimes.

Alexanda Kotey, known as ‘Jihadi George’, has vanished from the state systems while being held in Pennsylvania’s high-profile Canaan prison.

The 39-year-old was incarcerated there after pleading guilty to eight criminal charges relating to the abduction, torture and beheading of Islamic State hostages in Syria between 2012 and 2015.

But the Federal Bureau of Prisons (BOP) have confirmed that he is no longer in their custody – sparking concern about his whereabouts – with one expert claiming he may be grilled on ‘where the bodies are’.

He was sent to Canaan in august last year, with part of his plea deal including ‘cooperation requirements’. 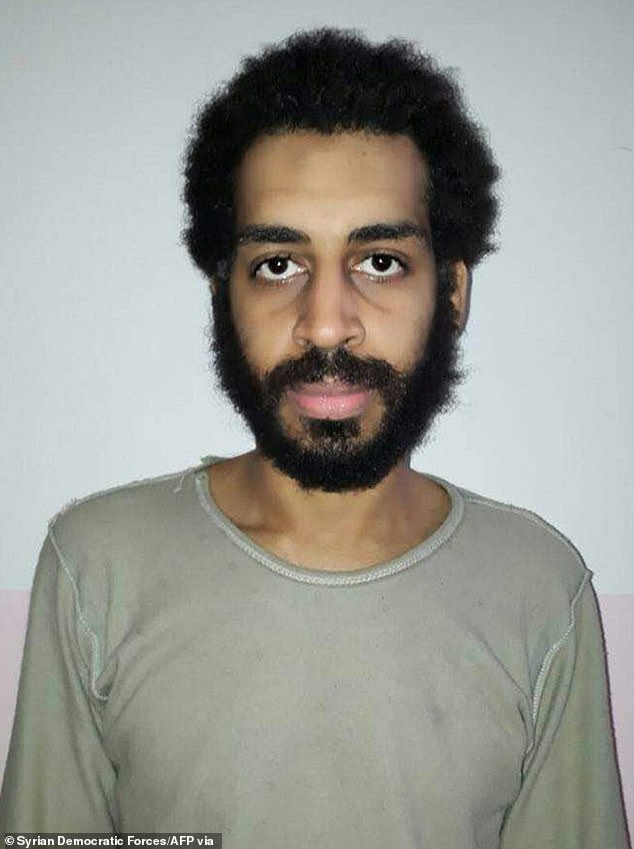 Alexanda Kotey, known as ‘Jihadi George’, has vanished from the state systems while being held in Pennsylvania’s high-profile Canaan prison

He faced trial in the US in relation to the four American hostages, before being sent to Canaan after being sentenced on eight counts

Kotey’s deal meant that he was able to avoid serving his time at the ADX Florence prison in Colorado – dubbed the ‘Alcatraz of the Rockies’.

However, less than six months after the sentencing, the BOP confirmed that he is ‘not currently in the custody of the Bureau of Prisons’.

A national security expert told DailyMail.com: ‘There is a high likelihood he has been moved to a secure location to speak with government officials – or non-government individuals – related to information he may possess that hasn’t been made public.

‘It could relate to the recovery of bodies the group was responsible for while they were illegally held.

‘For instance, US hostages that were killed by the Beatles.’

The BOP would not confirm where Kotey had gone, or why his position had changed, adding that there are ‘several reasons’ why inmates can be moved.

A spokesman said: ‘Inmates who were previously in BOP custody and who have not completed their sentence may be outside BOP custody for a period of time for court hearings, medical treatment or for other reasons.’

The BOP also noted that it does not provide specific details about an inmate due to ‘safety, security, or privacy reasons.’

They horrified the world after releasing video footage of several of the killings, showing their victims in orange jumpsuits before they were beheaded. Pictured David Haines with his daughter

Kotey no longer shows up on the system as being at the prison, with officials confirming he is not in their custody.

Alexanda Amon Kotey, left, and El Shafee Elsheikh,  spoke during an interview with The Associated Press at a security center in Kobani, Syria

Dr Joseph Downing, a terrorism expert at London School of Economics, told DailyMail.com that he thought it could be an ‘administrative error’ adding: ‘It does happen regularly in prison systems globally but is not often discussed.

‘For example the wrong inmates are regularly released due to record keeping errors or the wrong inmate being selected or, in some cases even inmates agreeing to try and let someone out to defraud the system for money or status.

‘You would imagine such a high-security high-profile prisoner would have been double and triple verified daily so a serious lapse or security has been made.

‘However it is highly unlikely that if he is outside he will be out for long due to his high-profile English accent and lack of immigration status and documents.

Dr Downing also said it could be possible the jihadi had cut a deal with the government to turn on ISIS and help them in exchange for parole.

A national security expert told DailyMail.com: ‘There is a high likelihood he has been moved to a secure location to speak with government officials – or non-government individuals – related to information he may possess that hasn’t been made public’

The 39-year-old was incarcerated there after pleading guilty to eight criminal charges relating to the abduction, torture and beheading of Islamic State hostages in Syria between 2012 and 2015

Kotey was a member of ‘The Beatles’ terror group who kidnapped and killed 27 people – targeting westerners because of their allegiance to ISIS.

They horrified the world after releasing video footage of several of the killings, showing their victims in orange jumpsuits before they were beheaded.

Among the group were four Americans, James Foley and Steven Sotloff, Peter Kassig and Kayla Mueller – and two Brits.

Taxi driver and aide worker David Haines traveled to Syria before being kidnapped, with his daughter Bethany, 24, telling The Scottish Daily Record yesterday that she believes Kotey is still in the US penal system.

She said: ‘In the past, he has been traceable, as we have access to data via the US victim notification scheme, and we at least had the reassurance that he was in a high-security facility,’ she said.

‘I don’t want to think that he has managed to negotiate his way into any kind of easy treatment on the basis of him assisting authorities or anything else.’

The terror cell was said to include Kotey, El Shafee Elsheikh (pictured) and ringleader Mohammed Emwazi , known as Jihadi John, who was killed in a drone strike

She met Kotey face-to-face in Virginia last year, where he told her how he had abducted her father and witnesses his torture and murder.

It was part of a deal which will see Kotey transferred to the UK, where members of his family live, to serve the rest of his term after serving 15 years in the US.

He may have also been taken abroad to assist with investigations into another case.

DailyMail.com have contacted the Ministry of Justice and HM Prison Service for a comment.

Kotey went to trial in America after being captured by Kurdish militia in Syria in January 2018, and was handed over to American forces in Iraq in 2020.

He faced trial in the US in relation to the four American hostages, before being sent to Canaan after being sentence on eight counts.

US freelance journalist Steven Sotloff (left) and  US aid worker Kayla Mueller, 26, (right) were both were killed in Syria by ISIS

Kotey was one of four terrorist – including El Shafee Elsheikh, Aine Davis, and ringleader Mohammed Emwazi – involved in the terror cell in Syria.

Emwazi, known as Jihadi John, was from West London and was killed in a drone strike – while the others have been forced to face justice for their crimes.

Elsheik was known as George and Davis as Paul, with the group getting their nickname because of their British accents.

Davis was arrested by the Metropolitan Police’s Counter Terrorism Command in August of last year after being released from a Turkish jail where he was serving a seven-and-a-half-year sentence for membership of the terror group.

Elsheikh was captured alongside Kotey in Syria in 2018 by the US-backed Syrian Democratic Forces while trying to escape to Turkey.

He was also sentenced to life imprisonment in the US last August after a jury convicted him of hostage-taking resulting in death and other crimes.

They were the quartet of Islamic State extremists who came to personify the worst excesses of the murderous caliphate which, between 2014 and 2016, conquered vast swathes of Syria and Iraq.

Who are the ISIS Beatles? The group included ringleader Jihadi John who shared beheading videos

Mohammed Emwazi was one of the most prominent members of the so-called ISIS Beatles and was regularly seen carrying out executions in their horrific beheading videos.

He took part in the barbaric beheading of British aid workers David Haines and Alan Henning, US journalists James Foley and Steven Sotloff, and US humanitarian worker Peter Kassig.

The terrorist, who was born in Kuwait and grew up in Queen’s Park, West London, was charged with 27 counts of murder and five counts of hostage taking in November 2014.

It is believed he was killed in a Hellfire missile drone strike in Syria in 2015.

Born Aine Leslie Junior Davis in 1984 to Fay Rodriquez, ‘Paul’ is believed to have spent the early years of his childhood in Hammersmith, London, where his mother lived.

He was one of 13 children his father had by four different women.

The former tube driver, who has drug-dealing and firearms convictions to his name, converted to Islam while serving time in prison.

Davis was captured by Turkish security officials in 2015 and was later found guilty of being a senior member of a terrorist organization and was sentenced to seven and a half years in prison.

In August 2022, Davis was deported from Turkey to the United Kingdom, and a day later – on August 11 – Britain’s Crown Prosecution Service authorised charges against Aine Davis for terrorism offences in 2014.

Kotey, 38, was born to a Ghanaian father and a Greek Cypriot mother and grew up in Shepherd’s Bush, West London.

Before his radicalisation, he is thought to have worked as a drug dealer before converting to Islam in his early 20s.

In 2012, he left for Syria where the US claims he was involved in beheadings and known for administering ‘exceptionally cruel torture methods’, including electronic shocks.

He was also accused of acting as an ISIS recruiter who convinced a number of other British extremists to join the terror group.

Kotey was captured in Syria while trying to escape to Turkey in 2018 and was held in a US military center in Iraq.

The British Government wanted him tried in the US, where officials believe there is a more realistic chance of prosecution than in the UK.

He was extradited last year and was charged with a number of terror offences. He pleaded guilty in September 2021 and was sentenced to life in prison, 15 years of which would be spent in the United States and then he would be transferred to the United Kingdom.

Born in Sudan, Elsheikh, 33, grew up in West London and is the final member of the four British terrorists who fled to join ISIS.

He has been linked to the killings of a number of hostages after heading to Syria to join the extremist group.

He was captured along with Kotey when they tried to flee to Turkey in 2018 and has since been transported to the US where he now faces charges relating to terrorism and beheading Western hostages.

He initially pleaded not guilty to all charges of kidnap, conspiracy to murder and providing material to support terrorism, but he refused to give evidence. He was found guilty following a trial in April 2022.

He eventually pleaded guilty to all counts and was sentenced to life in prison.