The daughter of a pro-Putin senator in Russia has fled abroad fearing persecution and jail after he branded her a “traitor” for opposing the war in Ukraine.

Diana Isakova, 25, distributed leaflets against the conflict that led to her arrest and interrogation by the feared FSB secret service.

Her father Eduard Isakov, 48, reacted furiously after previously warning her not to criticize Putin or the authorities on social media.

“We chatted and all my fears came true,” the yoga teacher told Medusa Media Outlet.

“He told me I was a traitor to our family, an enemy of the people and a criminal.”

When the war started, she saw the fear of Ukrainians, who she followed on Instagram, she said.

“The stories of these girls were full of bombshells and sobs. I felt her suffering as if it were my own.’

She staged a “bold” protest in Sochi that led to her swift arrest, and now claims Putin embodies “cruelty, arrogance and impunity.” 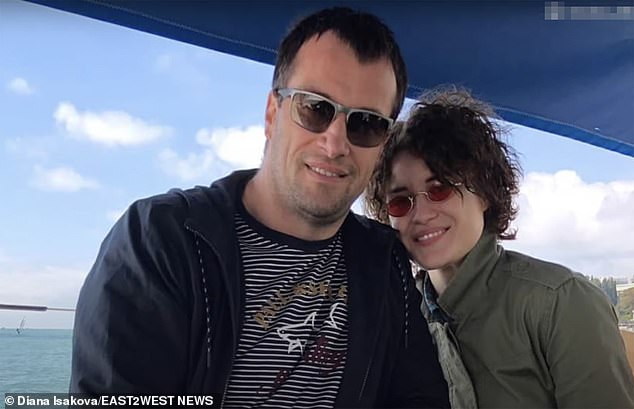 Diana Isakova, 25, distributed leaflets against the conflict that led to her arrest and interrogation by the feared FSB secret service. Pictured: Diana with her father in happier times

Her father Eduard Isakov, 48, a pro-Putin senator, reacted with anger after earlier warning her not to criticize Putin or the authorities on social media

Diana, pictured, said her father told her she was a “traitor,” “an enemy of the people” and a “criminal” for her anti-Putin posts

Putin – and her senator father, who supports him to the max – should be tried for the war, she says, while arguing Russia’s political illiberalism is a consequence of authoritarianism in the family, as the country’s despots are products of humiliation in of childhood.

“Inside every cruel person there is an unhappy child who is afraid to admit his weakness, his vulnerability and his needs.

“Of course Putin should be held accountable, but that doesn’t mean we just shoot him.

“By seeking revenge, we are effectively walking the same hateful path.”

She warned against “fanatical patriotism” in Russia and “weak-willed submission” of the people to the authorities.

The 25-year-old staged a “brave” protest in Sochi that led to her swift arrest and now claims Putin embodies “cruelty, arrogance and impunity”. Pictured: Diana with her father in happier times

Diana has now sought refuge in Georgia as her father – a professional powerlifter before becoming a politician in the Federation Council, Russia’s upper house – continues to attack her for opposing Putin and his bloody war in Ukraine.

“I wouldn’t say I’m just terrified of prison or anything.

“But I don’t think I can do any more good in prison.”

Her father said of her: “She opposes the implementation of the military special operation, against the politics of her own country.

“Obviously she was receiving money from certain media outlets.

“In other words, she sold her father, her family, her motherland and left Russia.

“It’s hard to find words when your daughter turns out to be a traitor.”

He wrote, “Not only has she opposed a special military operation, she has secretly engaged in opposition activities behind my back, living in my home at my expense, and realizing that I work for federal agencies.”

Her father said that the Diana pictured should return to Russia and be sent to the Donbass as a volunteer to “learn first-hand the reasons for the special military operation.”

She “admitted going to opposition rallies, picketing and protesting against government activities” and “organized her own action calling for the overthrow of the government [and] printed illegal leaflets in my house”.

The scolding senator said: “When she was arrested she was terrified and said that as a senator’s daughter you had no right to touch her…

“She’s not 15 years old, she’s no longer a teenager, she’s 25 years old, this is an adult who confessed her love to me and defied me. ‘

He claimed Diana, the eldest of his four children, was thrown off balance because he was never a presence in her life when she was younger.

“I don’t deny my responsibility for how my child was raised,” he said.

“This is my daughter and my pain.”

She should return to Russia and be sent to the Donbass as a volunteer to “learn first-hand the reasons for the special military operation”.

The 25-year-old’s father has lamented his daughter’s views and wondered why his daughter “refuses” to listen to him. Pictured: Diana

She complained “how I bullied my daughter, not allowing her to freely express her position, but for some reason she was living with me voluntarily and didn’t even think about moving out and starting an independent life.

“At the same time she had to move somewhere – she had been dating a grown man my age for three years.”

He accused her of wasting her money and then asking him for financial help without getting a proper job and dropping out of higher education.

“What is my fault as a father? Why is my daughter refusing to listen to me?

“Does she think I’m cruel? Perhaps I didn’t pay enough attention to her as a child [because] I was performing as a professional athlete back then.”

Diana, pictured, says Putin should be tried for the war in Ukraine, but says there is a “cult of cruelty” in Russia and that “something will change” if he leaves, but “it won’t very much”.

Diana said: “I believe that Putin is not the main problem.

“If Putin leaves, something will change, but not very much, because that is the root of the problem [in my opinion] the tyrant is attracted to the victim.

“And such a victim state, such a victim nation that Russia has become — for the most part, these are quiet, submissive people with no mind of their own…

“There is a cult of cruelty, of tolerance for violence between people, between children.

“Most likely, our entire political system is made up of people who have experienced violence in childhood, developed tolerance for it and the feeling that there is no other way to live in this world – only through power, through manipulation, coercion, fear, oppression. ‘

https://www.dailymail.co.uk/news/article-11175991/Daughter-pro-Putin-senator-flees-exile.html?ns_mchannel=rss&ns_campaign=1490&ito=1490 Daughter of senator close to Putin flees into exile