David De Gea believes Manchester United’s 1-1 draw at Crystal Palace could be a crucial factor in Sunday’s result against Arsenal as midfielder Casemiro is now suspended.

The Brazilian arrived at Selhurst Park on Wednesday night knowing he had to avoid a booking to face Arsenal at the weekend.

Casemiro is so important that there has been much speculation as to whether he should have been left out of the Midweek team in the first place. 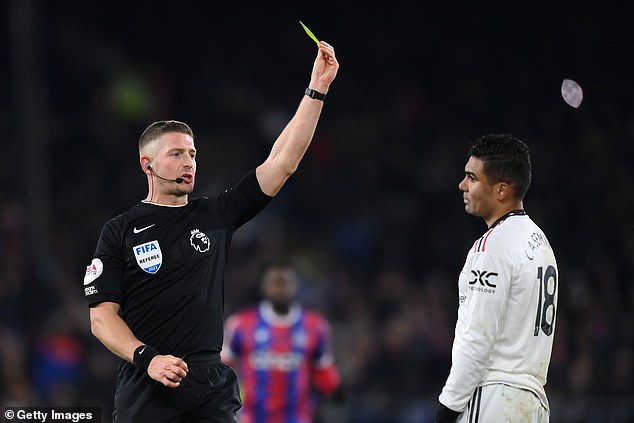 “It’s a huge blow to lose Casemiro for Sunday,” De Gea told Sky Sports after the game. “I don’t understand why Arsenal aren’t playing as we have to play in the same week and they don’t. Now we’re missing one of our best players.

‘I do not understand. Now we miss him for a big game and it’s a big loss for us.”

De Gea had a brilliant performance in goal as he appeared to have secured all three points for United which would have put them six points clear of leaders Arsenal before Sunday.

Instead, Michael Olise stepped forward to deliver a stunning injury-time free-kick that crashed off the bar and into the Spaniard’s net.

“It’s football,” said the ultimately disappointing result. “Sometimes you end up scoring and sometimes they end up scoring. let’s move on

“I think we’re doing really well and it’s a huge game on Sunday. I think we are a much better team than before.

“It’s nice to see and it was a bit sad today because we concede at the end but I still believe in this team. I think we have great players, we all want to win so let’s keep going.”

Now Manchester United are eight points down after playing an extra game – and just four days to recover before taking on the rejuvenated Gunners, who themselves last played at Tottenham on Sunday.