Nearly half a million desperate people have sought shelter in camps after torrential floods destroyed their homes in Pakistan.

The country’s climate minister warned that Pakistan is on the ‘front line’ of the world’s climate crisis after unprecedented monsoon rains wracked the country since mid-June, killing more than 1,136 people.

The rains stopped more than two days ago and floods in some areas were receding.

But Pakistanis in many parts of the country were still wading through waters that filled their homes or covered their town’s streets as they struggled with how to deal with the damage to homes and businesses.

A monumental relief effort is being undertaken to tackle distress calls, with millions of acres of farmland also at risk.

The Indus River is on the verge of breaking its banks which could overwhelm a third of the country with flooding – an area roughly the size of Britain.

The south Asian country’s annual monsoon is an essential part of its weather cycle, the Times reports, as it irrigates crops and replenishes lakes after the summer heat.

But in extreme cases, it can cause destruction and this years monsoon has been added by the flow from melted glaciers. Pakistan’s international appeal for aid on Sunday was answered first by Turkey and the United Arab Emirates, who airlifted supplies. 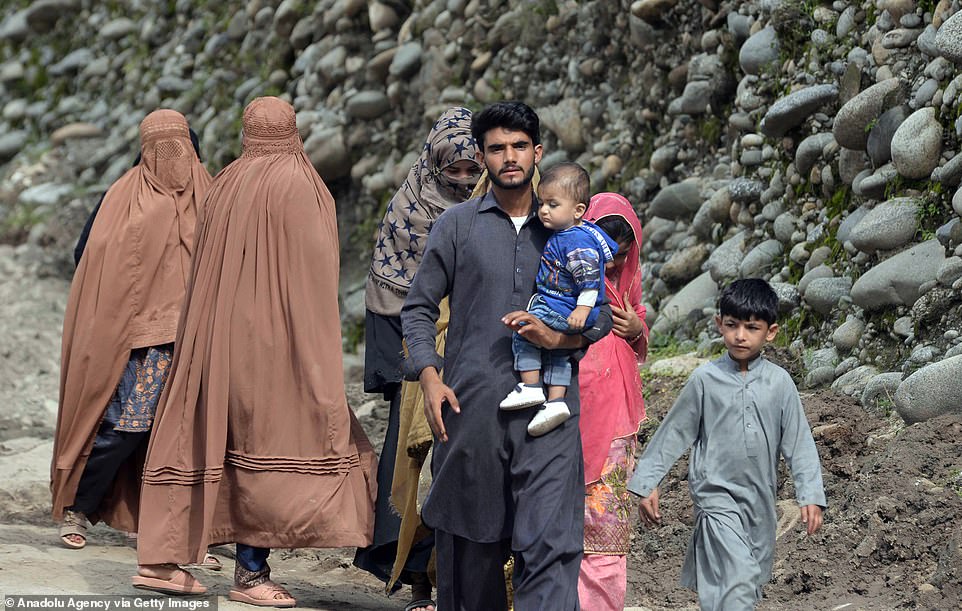 Families sit near their belongings surrounded by floodwaters, in Sohbat Pur city of Jaffarabad

Displaced families line up to receive food as they take refuge on a roadside after fleeing their flood-hit homes in Charsadda, Pakistan (Mohammad Sajjad/AP)

In one of the worst single incidents of the flooding, at least 11 people were killed on Monday when a boat that volunteer rescuers were using to evacuate two dozen people capsized in the flood-swollen waters of the Indus River near the southern city of Bilawal Pur.

An unknown number were still missing from the capsizing.

Monsoons have hit earlier and more heavily than usual since the start of summer, officials say – most recently with massive rains last week that affected nearly the entire country.

Pakistan is accustomed to monsoon rains and flooding, Ms Rehman said, but not like this.

‘What we saw recently in the last eight weeks is unrelenting cascades of torrential rain that no monsoon has ever brought with it ever before,’ she said.

The heavy rains are the latest in a series of catastrophes that Ms Rehman said are exacerbated by climate change, including heatwaves, forest fires and glacial lake outbursts.

Since 1959, Pakistan is responsible for only 0.4% of the world’s historic CO2 emissions.

‘Climate knows no borders and its effects can be disproportionately felt,’ Ms Rehman said, adding ‘we’re on the front line of a global crisis’.

The National Disaster Management Authority said floods this summer have killed more than 1,136 people and injured 1,636, as well as damaging one million homes.

At least 498,000 people in the country of 220 million are in relief camps after being displaced, it said.

Many more displaced are believed to be living with relatives, friends or outside.

International aid was starting to flow into Pakistan, and the military was helping distribute aid to remote areas and evacuate those who had lost their homes.

A family sits under a tent set up next to their demolished house, surrounded by floodwaters, in Sohbatpur (Zahid Hussain/AP)

Authorities were starting the long effort of rebuilding roads and restarting railways.

The floods destroyed more than 150 bridges and numerous roads have been washed away, making rescue operations difficult.

In the south-eastern town of Shikar Pur not far from the Indus River, Rehan Ali dug up bricks from the collapsed walls of his home, nearly completely destroyed by lashing storms and waters that raged through.

His family’s possessions were strewn around outside.

The 24-year-old labourer said he cannot rebuild without government help and cannot work now because of the turmoil.

‘I don’t even have anything to feed my family. I lost everything. I don’t know where to go. God help me,’ he said.

Arif Ullah, an official at the Pakistan Meteorological Department, told the AP that more rains will continue to lash parts of Pakistan next month.

Prime Minister Shehbaz Sharif said the rains so far have been the heaviest Pakistan has seen in three decades.

‘I saw floodwater everywhere, wherever I went in recent days and even today,’ Mr Sharif said in the town of Charsadda in the north-east of the country.

Some 180,000 people in the town have been evacuated after the Swat River overflowed and swamped nearby communities.

Mr Sharif has said the government would provide housing to all those who lost their homes.

Elsewhere, Pakistan’s foreign minister said the calamitous floods gripping the country are ‘a catastrophe on a scale that I have never seen’ as the death toll soared above 1,000 and an area the size of Britain faced going underwater.

Tens of millions of Pakistanis have been forced to flee their homes as entire villages have vanished, with dramatic footage capturing hotel collapses, helicopter rescues and narrow escapes.

Foreign minister Bilawal Bhutto Zardari said this morning from his home in flood-ravaged province Sindh, south-eastern Pakistan: ‘Around me is just water, water and more water. There’s not much dry land to be found.

Children walk carefully along a makeshift wooden pathway with deep floodwater around them in Sindh, south-east Pakistan

Flood victims move on a carefully balanced motorbike from their homes in Matiari, Sindh province this morning after flooding

Data shows the immense scale of flooding across Pakistan since June, with destruction intensifying over the past few days

‘We’ve suffered a devastating monsoon [with] floods from the sky that have been going on since the end of June.’

Many of the displaced have lost not just homes, but also crops and businesses.

‘I am sitting with my family in a tent, and how can I go out to work? Even if I go out in search of a job, who will give me any job as there is water everywhere,’ asked Rehmat Ullah, a flood victim in Charsadda.

She broke down in tears as she recounted how her house collapsed in the floods.

‘We were given a tent and food by soldiers and volunteers,’ she said. ‘Floodwater will recede soon, but we have no money to rebuild our home.’

At least 6,500 soldiers were deployed to help, and authorities said they were using military planes, helicopters, trucks and boats to evacuate marooned people and deliver aid to them.

However, many displaced complained they were still waiting for help.

Some said they got tents but not food.

Pakistani authorities say this year’s devastation is worse than in 2010, when floods killed 1,700 people.

He appealed to Pakistanis living abroad to generously donate to the flood victims.

Cargo planes from Turkey and the United Arab Emirates began the flow of international aid, landing in Islamabad on Sunday with tents, food and other daily necessities.

The United Nations will launch an international appeal for Pakistani flood victims on Tuesday in Islamabad.

The flood wreckage has hit Pakistan at a time when the country faces one of its worst economic crises, narrowly avoiding a default.

The announcement was a big relief for the country.

Pakistan and the IMF originally signed the bailout accord in 2019.

But the release of a 1.17 billion dollar tranche had been on hold since earlier this year, when the IMF expressed concern about Pakistan’s compliance with the deal’s terms under former prime minister Imran Khan’s government.

Last week, the United Nations in a statement said that it has allocated three million dollars (£2.5 million) for UN aid agencies and their partners in Pakistan to respond to the floods and this money will be used for health, nutrition, food security, and water and sanitation services in flood-affected areas, focusing on the most vulnerable.