Former Las Vegas Raiders coach Jon Gruden spoke for the first time publicly about the email scandal that led to him losing his job last fall.

Speaking at the Little Rock Touchdown Club in Arkansas on Tuesday, Gruden admitted his mistakes in the incident while hoping for another chance.

This all comes as Gruden filed a lawsuit against the NFL, claiming they singled him out.

“I am ashamed of what happened in these emails and I will make no apologies for it,” Gruden said.

“It’s embarrassing. But I’m a good person. I believe that. I go to church. I’ve been married for 31 years. I have three great boys. 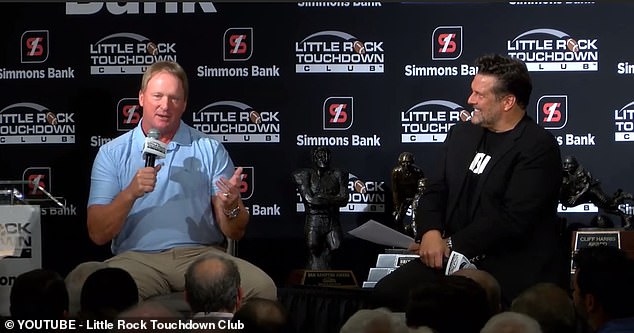 “I still love football. I made some mistakes. But I don’t think anyone here has. And I just beg your pardon and hopefully I’ll get another chance.’

The emails Gruden sent contained racist, homophobic and misogynist language and were published in two separate reports in the Wall Street Journal on October 8 and the New York Times on October 11.

After the release of the second report, Gruden resigned.

“I’m getting choking, you know, because there’s a lot of misunderstandings out there right now,” Gruden told those in attendance at Little Rock on Tuesday.

“What you read, what you hear, what you see on TV. Heck, I worked at ESPN for nine years. I worked hard at this job.

“I don’t even want to watch the channel anymore because I don’t believe it’s all true. And I know a lot of this is just trying to get people to watch. But I think we need to get back to reality.”

The emails were sent while Gruden was working for ESPN, where he was an NFL games analyst

After retiring, Gruden sued the NFL, claiming they ruined his reputation

The emails were all released as part of a league investigation into working conditions within the team now known as the Washington Commanders.

Gruden later filed a lawsuit against the NFL, accusing the league of “Soviet-style character assassination.”

“The complaint alleges that the defendants selectively leaked Gruden’s private correspondence to the Wall Street Journal and the New York Times in order to tarnish Gruden’s reputation and force him out of his job,” Gruden’s attorney, Adam Hosmer-Henner, said in a statement.

“There is no explanation or justification as to why Gruden’s emails were the only ones released out of the 650,000 emails collected in the NFL’s investigation into the Washington Football Team, or why the emails were retained for months were before they were released in the middle of the Raiders’ season.’

In a statement released to DailyMail.com in response to the lawsuit, NFL spokesman Brian McCarthy called Gruden’s allegations “completely unfounded” and said the league will “vigorously defend these allegations.”

As a result of the WFT’s hostile workplace investigation, which ended in July, the club was fined $10 million. Snyder agreed to cede day-to-day control of the franchise to his wife, Tanya.

Back in May, a Nevada judge denied the NFL’s request to compel arbitration and dismiss the case, which could result in a jury trial.

It’s unknown if Gruden will return to training, but he’s hoping he can get a second chance in the NFL