A disturbing video showing a Knox High School student proudly proclaiming that he “hates n***as” has surfaced in the wake of the school’s encrypted chat group scandal.

The video shows the boy out for a walk with friends when he is told to say it again for the camera, to which the boy exclaims, “I hate n***as f*ck”.

Sydney’s elite private boys’ school was recently rocked after a secret chat room was exposed in which students were sending outrageous messages about gang rape, abortion and Hitler.

It was later revealed the school knew about the private chat group on popular encrypted app Discord for weeks before notifying parents.

Veteran child psychologist Rose Cantali told The Daily Telegraph that schoolchildren grew up using social media but there is a big gap in terms of education and rules about what is appropriate. 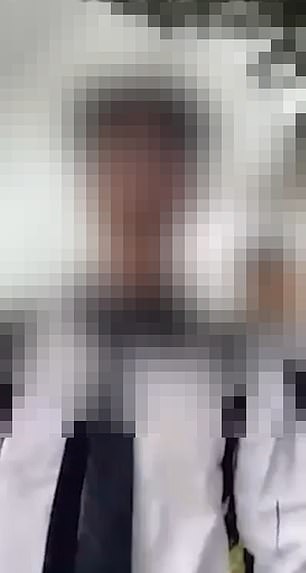 “I think we have to focus on the spectators. It’s like the guy is throwing garbage on the ground, you’re not going to stop him, so you have to educate those around him,” Ms. Cantali said.

“The power of the spectators should not be underestimated in all of this, they have a lot of power. Even a message that I will unfollow you means a lot these days.”

The $35,000 school first heard about the group in late July but only alerted parents last week when the newspaper leaked a series of shocking news stories.

However, it has since been revealed that there were over 150 participants in the group chat called “Gang Gang” – the majority students or alumni of Knox Grammar.

Mr James also told the parents that the matter had been referred to NSW Police.

However, a source told the Daily Telegraph that police were only made aware of the full extent of the news when it was shared by the publication on Tuesday.

Daily Mail Australia has reached out to Knox Grammar for comment on the new revelations.

Police have investigated a video shared in the chat room of a student handling ammunition. They concluded that it belonged to the boy’s father, who is a licensed gun owner on private property.

Some of the more graphic content has been turned over to the Child Abuse and Sex Crimes Unit, which has yet to find any material that constitutes a crime.

The revelation comes just hours after a Jewish institution called the entire Knox Grammar cohort to meet with a Holocaust survivor.

Users in the chat room have sent messages using aliases such as “n*****removalservice” and “Fa**othather3000”.

After reading the “grossly offensive and unacceptable” talks, NSW Jewish Board of Deputies CEO Darren Bark invited Knox’s entire cohort to the Sydney Jewish Museum to meet with a survivor.

“We are appalled by reports of Sydney high school students expressing anti-Semitic and pro-Hitler sentiments online,” Mr Bark said in a statement on Thursday.

“We invite the entire Knox Grammar cohort to visit the Sydney Jewish Museum and meet with a Holocaust survivor so they realize their comments are not remotely funny.

“We would also welcome the participation of Knox students in the NSW Jewish Board of Deputies’ Respect, Understanding and Acceptance program, which breaks down barriers between students from different religious and ethnic backgrounds.”

Knox Grammar has since suspended several students for their participation in the group dubbed “Gang Gang” and launched an internal investigation.

A spokesman for the school told Daily Mail Australia that the boys who were expelled were “trying to settle into other schools”.

Another asked why they weren’t invited to a “rape party.”

Shocking videos of young men apparently being brutally assaulted were also shared in the group chat, which is believed to have started about two years ago.

Mr Watson-Munro said there was a risk a “crazy” group member would act out part of the troubling conversation.

“Regarding the images, some were taken during school activities and later dealt with, and the school has spoken to the families of identifiable students.