By Trevin Lund for Dailymail.Com

Dixie D’Amelio showed off her slim physique and toned stomach when she arrived solo at Avril Lavigne’s party at Beauty and Essex in Hollywood on Wednesday.

The social media sensation and recording artist wore a tiny bra top with an inverted V-cut at the front and added black and white pants.

The outing comes after she denied that she and longtime boyfriend Noah Beck have split. 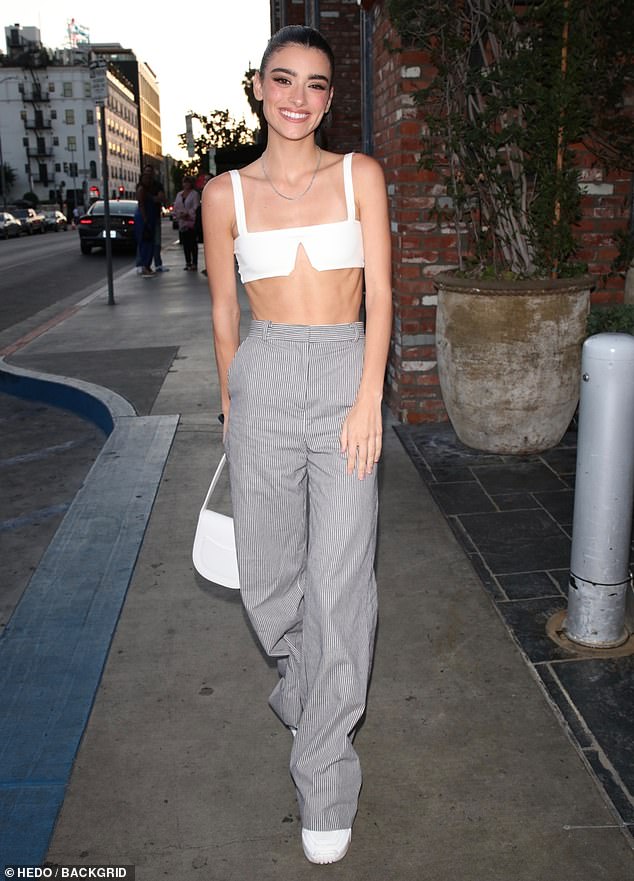 Looking good: Dixie D’Amelio, 21, showed off her slender frame in a bralette top and pants in Hollywood on Wednesday

Busy girl: The singer has teamed up with Amazon to launch a collection of her favorite back-to-college favorites that are perfect for adding a cozy vibe to a dorm or apartment

Sporting a sleek yet relaxed evening style, the 21-year-old looked radiant during her performance.

The star accessorised her look with a white handbag and sneakers and a simple silver necklace, keeping her hairstyle simple and choosing a topknot for her tresses.

Addressing the rumors: Dixie, 21, spoke out, explaining that she hasn’t been broken up with boyfriend Noah Beck and that the two lovebirds are still together but have chosen not to publicize their relationship on social media

Solo: D’Amelio has been battling rumors of an alleged split from boyfriend and social media colleague Noah Beck since he failed to attend her 21st birthday extravaganza in Las Vegas last month; seen at the MTV Video Music Awards in late August

D’Amelio has been fighting rumors of an alleged split from her boyfriend and social media colleague Beck since he failed to attend her extravagant 21st birthday party in Las Vegas last month.

The couple, who are celebrating their two-year anniversary this month, met in early 2020 and made it official by the end of the year.

Beck attributed his absence to his work schedule and immediately addressed the speculation on his Twitter to end the rumours.

Still together: The star stressed that the two lovebirds are still together but have decided not to showcase their relationship on social media; the two pictured in 2021

Social Media Stars: Both Dixie and Noah have a large social media presence on both Tik Tok and Instagram; seen in December 2021 in New York City

Addressing the ongoing questioning of the status of their relationship, the A Letter to Me singer told an interviewer for People, “As we’ve said a million times, we’ve decided to take our relationship off social media,” further explaining the the decision was: “concentrate on [their] Mental health.’

In an interview with E! News, the personality revealed that the duo made a joint decision earlier this year to keep their relationship more private.

Happy couple: Despite speculation that the two Tik Tik stars have split, the singer told People that they are still together and that “we love each other”; pictured at Jingle Ball New York City in 2021

https://www.dailymail.co.uk/tvshowbiz/article-11169907/Dixie-DAmelio-shows-toned-tummy-white-bra-arrives-Avril-Lavignes-party.html?ns_mchannel=rss&ns_campaign=1490&ito=1490 Dixie D’Amelio shows off her toned abs in a white bra top as she arrives at Avril Lavigne’s party

"This is awesome": Travel expert shares essential hack for picking the best seats on the flight