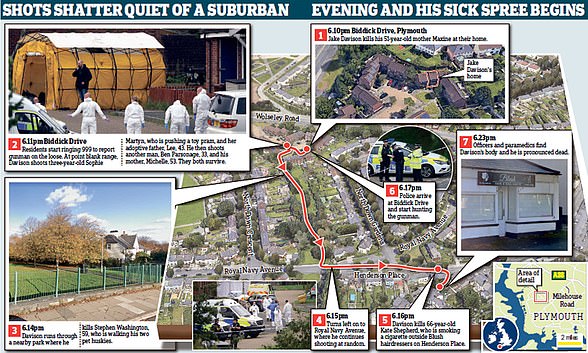 On the evening of August 12, 2021, gunman Jake Davison killed five people in an eight-minute incident in the Keyham neighborhood of Plymouth.

Here is a timeline of events shown to the jury at an inquest into the deaths of Davison’s victims:

– 3:22 p.m.: Davison returns home to 17 Biddick Drive, where he lives with his mother, Maxine Davison. He can be seen on the video camera of a neighbor coming home.

– 5:20 p.m.: Maxine Davison leaves the house for a dentist appointment.

– 5:35pm: Maxine Davison returns home as she was given the wrong date for her appointment.

– 6:05 p.m.: Maxine Davison calls her sister Marlene Hill and reports that she and her son are having an argument.

– 6:08 p.m.: A neighbor hears two shots. Mrs Davison is shot twice – once from two meters and once from one meter. Davison leaves his house with the gun and catches up with the Martyns.

– 6:09 p.m.: Davison fires three times from 20 yards and closer at Mr. Martyn. Sophie is shot once from a meter away.

Kate Shepherd leaves the Lidl supermarket on Wolseley Road and walks down Henderson Place to the Blushes hairdressing salon.

Neighbors call the police on 999 and report, “I’m on Biddick Drive, please, he just shot someone.”

Another neighbor said: “I’m at my kitchen window, heard a bang and the person who did it lives at this 17th street, thinks his name is Jake or something. I heard a bang and thought what the hell was that and he ran downstairs and saw him pumping his gun.

Another call from 999 reports, “He went up in the back with an automatic weapon, looks like a black automatic rifle.”

The man replies, “Yes, you have it. Think he might have killed his mother too, his door is open…’

Another call says, ‘He was walking up the street, he’s shooting everywhere… went up to Henderson Place.’

Davison then shoots at a house on Biddick Drive, injuring two people – mother and son Michelle Parker and Ben Parsonage – as they opened their front door to see what was going on.

– 6:10 p.m.: Davison goes to Linear Park, which is off Biddick Drive, and shoots Stephen Washington twice – once at a distance of 10 to 16 yards and once at less than ten yards. A bystander in the park known as Snakey Path sees him and runs away after being warned by his wife, who overheard the shooting.

Davison exits Linear Park, turns left onto Royal Navy Avenue and walks towards Henderson Place. He can be seen on CCTV carrying the shotgun in his right hand and wearing shorts and t-shirts.

– 6:11 p.m.: As Mrs Shepherd walks down Henderson Place, Davison approaches her from the direction of Royal Navy Avenue and crosses the street. CCTV shows him with a shotgun in his right hand.

– 6.12pm: Ms Hill calls 999 on behalf of her sister and tells the operator: ‘I just had a call from my sister her son has mental health issues. He locked her in the bedroom, grabbed her by the throat and wouldn’t let her out.’

– 6:13 p.m.: Davison shoots Mrs. Shepherd in the abdomen from a range of no more than ten feet outside the Lush salon. Her death was caught on CCTV and her shopping bag falls to the ground. Moving on, Davison goes to nearby Bedford Street.

Davison threatens witnesses on Bedford Street and by this time has only two rounds left in his shotgun. An ambulance arrives to treat Mrs. Shepherd.

– 6:22pm: Davison walks down Bedford Street towards Henderson Place and CCTV picks him up with the shotgun under his chin.

– 6:24 p.m.: At the corner of Beford Street and Henderson Place, Davison shoots himself as he walks down the street. As he does so, a second police car pulls up.

The latest incident is also caught on camera in the ambulance attending to Mrs. Shepherd.

A single cartridge was recovered from the weapon, a black Weatherby pump-action shotgun.