Former President Trump blasted President Biden’s handling of the Afghan pullout in a sit-down interview with Fox News when he told Sean Hannity why the Taliban feared him too much to take over the nation.

“During my 18-month talks with Taliban leader Abdul, we have not lost a single soldier,” Trump said Thursday night, referring to Abdul Ghani Baradar, co-founder and senior figure of the Taliban.

Trump then told Hannity he had threatened to “wipe out” Abdul if he didn’t follow his orders.

“Didn’t you at one point tell him, ‘I know exactly where you are’ and give him the exact coordinates of where he was?” Hannity asked.

“No,” Trump replied. “I sent him a picture of his house.” 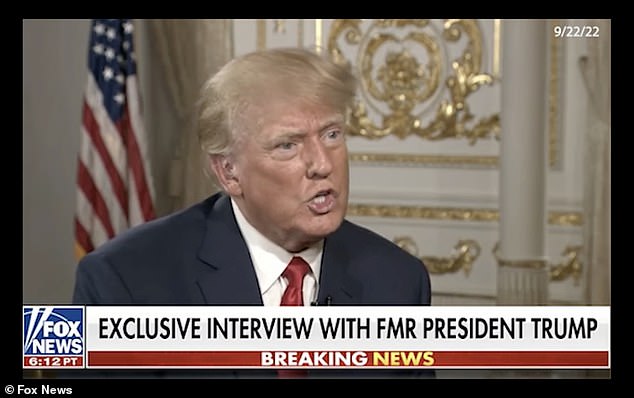 “Didn’t you at one point tell him, ‘I know exactly where you are’ and give him the exact coordinates of where he was?” Hannity asked. “No,” Trump replied. “I sent him a picture of his house”

“During my 18-month talks with Taliban leader Abdul, we did not lose a single soldier,” Trump said, referring to Abdul Ghani Baradar, co-founder and senior Taliban figure

Trump further recalled, “I said, ‘If you do anything, we’re going to hit you harder than any country has ever been hit.’ He said, “I understand, Your Excellency.”

‘I’m the one who has very few soldiers. I wanted out,” Trump said, referring to the last 2,500 US troops who remained in Afghanistan at the end of his presidency. “We would have had a very similar schedule, but I would have eliminated the military last.”

Trump had long called for an end to the Afghan war and planned to withdraw all US troops by May 1, 2021. However, he claims he had a plan that would have made for a less hectic exit.

“I would have taken the best military equipment in the world, $85 billion worth of military equipment that we left behind. By the way, 13 soldiers were killed,” he said, referring to the 13 marines who died in an explosion trying to evacuate US citizens and allies when the Taliban took over Kabul.

Biden has been widely panned for the chaotic security situation that left Kabul airport vulnerable to the devastating suicide bombing that killed 170 Afghan civilians and 13 US soldiers in August 2021. Critics and supporters alike have worried about the long-term ramifications – such as broken promises not to leave Americans behind and the blow American credibility is taking with its allies.

In September 2021, Trump denounced the largely obsolete military equipment the US had left to the Taliban and said the US should bomb Afghanistan: “We should either use unequivocal military force and get it, or at least bomb the hell out of it,” said he then.

Referring to the war in Ukraine, Trump told Hannity, “Putin is being mistreated.”

In another wild moment during the interview, Trump claimed that Venezuela is “opening its prisons” to send criminals to the US and said that immigrants are “poisoning” our country under President Biden.

When asked by Fox News’ Sean Hannity how quickly he could get the nation back to what it was under his administration, Trump said he could get most things back “very quickly,” aside from the migrants who left the country “poisoned”.

Asked if he would deport the millions of illegal migrants who have entered the country under President Biden, Trump said, “The bad guys, the bad guys.”

“Millions and millions of people have poisoned our country,” Trump said.

“Yesterday I heard that Venezuela is dumping its prisons in the United States,” the former president told Hannity. “I’m almost surprised it took them so long.”

So far this fiscal year, border officials have seen a record 2,150,000 encounters with migrants at the southern border.

Trump was referring to a Breitbart news report on a Department of Homeland Security (DHS) intelligence report that warned that prisoners freed by the Venezuelan regime had traveled to the United States in caravans in Mexico in July.

Asylum-seeking migrants queue in front of a new Mobile En-Route Processing Unit (MERC) used by the US Border Patrol to quickly process asylum seekers at the border in downtown El Paso, Texas, September 21

A source told the outlet that without diplomatic ties with Venezuela, identifying migrants with criminal records is nearly impossible.

In 2024, Trump told Hannity he couldn’t “legally” tell him whether or not he would run again. Biden has also cited electoral law that prevents him from officially announcing his candidacy. If any of the candidates officially said they were running, it would trigger new restrictions and procedural requirements.

Trump, who still refuses to concede his 2020 loss to Biden, then claimed he would rather see Biden succeed even if it meant losing to the Democrat in 2024.

“I’d rather see him be incredibly successful, even if it would be a lot tougher – and maybe even a loss. I want to see what’s good for the country,” the former president said.

https://www.dailymail.co.uk/news/article-11241527/Donald-Trump-threatened-obliterate-Afghan-leader-tense-talks-president.html?ns_mchannel=rss&ns_campaign=1490&ito=1490 Donald Trump threatened to “wipe out” the Afghan leader during tense talks during his tenure.