Leading economists warn a recession is looming in the near future, despite attempts by the Biden administration to downplay the risks.

Lakshman Achuthan and Anirvan Banerji, co-founders of the Economic Cycle Research Institute – which sets recession dates for 22 global economies – say the United States is on track to weather another recession like that of 2008.

They said in an op-ed for CNN that the Biden administration’s efforts to quell an impending economic downturn have come too late.

And although GDP has grown in the last quarter of 2022 and the economy has added more jobs, that will soon change, Achuthan and Banerji say. 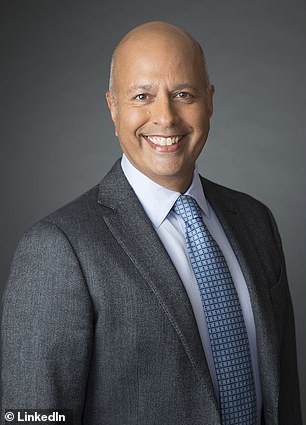 Lakshman Achuthan and Anirvan Banerji, co-founders of the Economic Cycle Research Institute – which sets recession dates for 22 global economies – warn that a recession is looming in the near future

The Economic Cycle Research Institute has been forecasting a recession since last spring, and Achuthan and Banerji say the forecast hasn’t changed despite the Federal Reserve’s efforts to raise interest rates.

They explain: “By the time the Fed started raising rates, the economy was already slowing, making a recession more likely.”

Achuthan and Banerji said the goods sector is particularly vulnerable as it is sensitive to rising interest rates, which raises the cost of borrowing for many families.

As a result, US factory orders have fallen and – under pressure from rising mortgage rates – home construction has slumped.

At the same time, the economists write, the purchasing managers’ index for the manufacturing sector, which measures the monthly change in manufacturing activity, has fallen by more than half in the past two months.

In his release last month, Timothy R. Fiore, Chair of the Institute for Supply Management, said, “This is the second month of contraction and, as predicted, will likely be the norm for the PMI through at least the first quarter of 2023, with the PMI expected to be between 48 and 52 percent.’

A similar index for the services industry also fell below 50 last month, suggesting that services activity has also started to decline.

The economists warn that the US is on a similar path to 2008, the start of the Great Recession. Here you can see stock traders stressing about the October 2008 economic downturn

The economists write that although GDP had not yet declined in the spring and summer of 2008, there were already signs of a looming recession

And while falling domestic product growth and rising unemployment are sure signs of a recession, Achuthan and Banerji write: “GDP and jobs may move in step with the economy, but when they are released they only tell us where the economy has been in the recent past.’

“Employment in particular may hold up longer than expected in a recession scenario.

“That was true in the inflationary period around the 1970s. Most notably, unemployment did not peak until eight months after the onset of the severe recession of 1973-1975.’

The Biden administration is yet to release its December jobs report, but 263,000 jobs were added in the US in November as unemployment stayed steady at 3.7 percent.

However, Achuthan and Banerji said the reason many companies may not be laying off their employees just yet is due to a so-called “money illusion,” in which business owners tend to see earnings in real dollar amounts rather than adjusting them for inflation.

Adjusted for inflation, the economists write, revenue typically falls in a recession as customers make fewer or fewer purchases.

It also forces business owners to pay more for everything they buy, eroding their profits and causing layoffs.

That’s exactly what happened in 2008, Achuthan and Banerji said, “when many — including then-President George W. Bush — weren’t worried about a recession because [the] GDP had not yet declined even though job cuts had begun.

“Basting the prevailing complacency, we wrote for CNN at the time: ‘While GDP has not yet declined, we have already seen four straight months of wage job losses. This indicates that the economy is on the path to recession.

“And it implies that either one or both of the recent slightly positive GDP estimates will be revised to negative by next year.”

In conclusion, the economists write: “Our recession forecasts have not faltered.

“We should all be prepared.”

The bleak forecast bodes bad news for the Biden administration, which has tried to downplay the risks of a recession

Inflation in the US slowed again last month, rising at an annual rate of 6.5%. It was the sixth consecutive month that the annual inflation rate has fallen

The bleak prognosis spells trouble for the Biden administration, which has spent months trying to prove that the United States is not in danger of recession.

It points to falling inflation and rising GDP, which grew 3.2 percent year-on-year.

On Thursday, the Labor Department reported that prices for energy and many goods fell or even fell in December, while prices for food, services and housing continued to rise at an uncomfortable pace.

It was the sixth consecutive month that the annual headline inflation rate fell from a June peak of 9.1 percent and November’s rate of 7.1 percent.

“Although inflation is high in economies around the world, in America it’s falling month by month, giving families some breathing room. And the main reason is falling gas prices,” Biden said in prepared remarks at the White House.

Meanwhile, the US Bureau of Economic Analysis reported in December that the current GDP dollar amount had risen 7.7 percent annually. or from $475.5 billion to $25.72 trillion.

It also said current personal incomes rose to $283.1 billion in the third quarter of 2023, mainly due to increases in compensation, personal interest income and nonfarm owner income, while disposable personal income fell by 242.4 billion US dollars or 5.4 percent.

JPMorgan Chase’s annual Business Leaders Outlook found that most CEOs expected a recession in the coming year, but often felt they could still grow their sales and maybe even their profits

Achuthan and Banerji are far from the only economists predicting a near-term recession.

Two in three US small and mid-sized companies expect the country to slide into recession in the coming year, researchers at JPMorgan Chase say in the latest study, warning of inflation’s unrelenting toll on the economy.

The Wall Street bank’s annual Business Leaders Outlook 2023, released Thursday, found that 65 percent of midsize and 61 percent of small businesses are eyeing a recession, while most small business bosses expect prices to be high.

Ginger Chambless, a senior researcher at JPMorgan Chase, said the “challenging headwinds” from inflation, which hit a 40-year high of 9.1 percent in June, “are beginning to ease and should cool throughout 2023.”

However, she warned that high prices will affect spending in the coming months and “companies may still want to consider adjustments to strategy, pricing or product mix to weather the storm in the short-term.”