Grimes uploaded a new Instagram selfie to her 2.4million fans on Friday, which shows off a significantly larger-looking pout that could be the result of too much lip liner.

The musician, who previously dated Elon Musk, explained that she is considering getting a white ink tattoo on her face.

“I’m seriously considering getting a white ink tattoo on my face next week,” said the 34-year-old star. 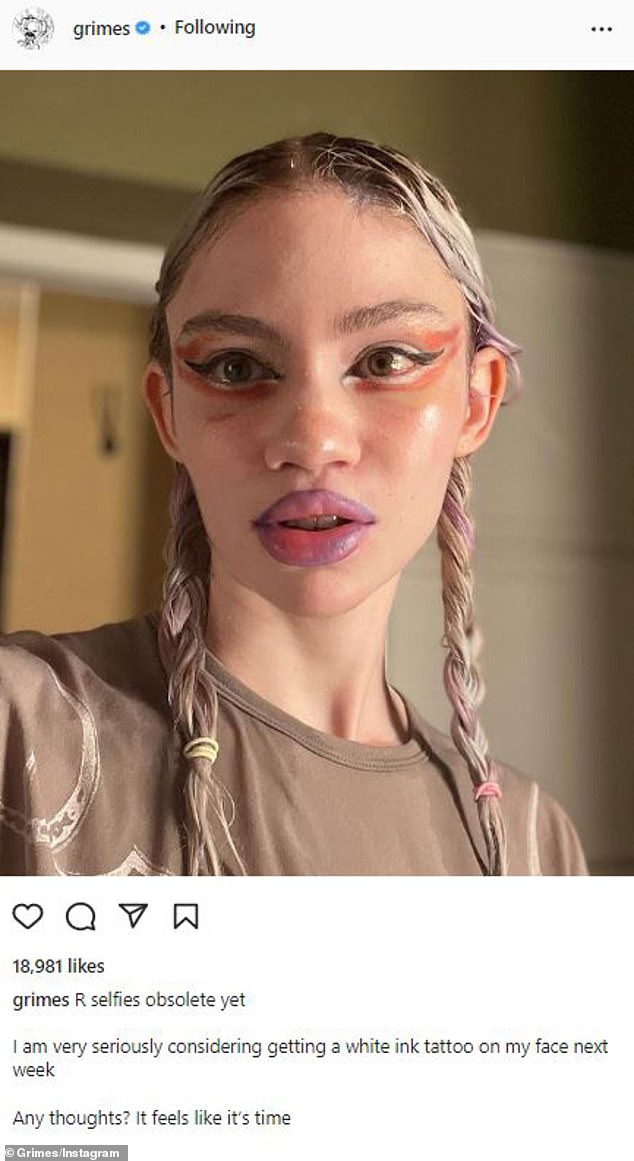 New selfie: Grimes, 34, uploaded a new photo of herself to her main Instagram page on Friday asking about getting a new tattoo

The mother-of-two, son X Æ A-12 and daughter Exa, who she shares with Elon, snapped a quick photo of herself posing for a close-up selfie.

She wore light pink lipstick, which she heavily outlined with purple lip liner. Grimes also lined her eyes with a brown eyeshadow. A layer of black eyeliner made her green eyes pop.

Her hair was parted in the middle and pulled back into two separate pigtails that fell to her shoulders.

Grimes, whose real name is Claire Elise Boucher, included a caption to the post telling her loyal fans that she felt it was “time” to get a face tattoo.

Previous Tattoos: The musician already has a pattern of white ink tattoos covering her entire back

“R-Selfies outdated,” she typed. “I’m seriously considering getting a white ink tattoo on my face next week. Any thoughts?’

Grimes announced that she plans to get the white ink tattoo as early as next week.

Social media users immediately jumped to the comments section to offer their own opinion and support.

One follower agreed, “It’s about time,” while another user wrote, “You have a uniquely beautiful face, I hope the tattoo will only make it better!”

Last April, the talented songwriter shared a photo of her back covered in fresh white ink, explaining that once they’re healed they’ll be “beautiful alien scars.”

Former Relationship: Space engineer Elon Musk and the singer, who previously dated and have two children together; seen at the MET Gala 2018

According to Page Six, Grimes had expressed interest in reaching the goal of covering her entire body in the special white tattoo on her Instagram Story in January.

She had written that she had been working toward a “long, slow effort to have a complete alien body… entirely covered in white ink.”

Speaking to Vogue about fashion and expression, the Player Of Games singer said, “Human and animal bodies are the most primal means of expression.”

She added, “Bodies are probably the first canvas for ideas before creatures are even confident enough to have ideas. So I think style is important.”

“Style matters”: During an interview with Vogue, Grimes said, “Human and animal bodies are the most primal means of expression”; seen at the MET Gala 2021

New post: On her main Twitter page, the star gave her followers a glimpse of her daughter Exa or otherwise known as Y to her followers earlier this month in September

Grimes was previously in a relationship with SpaceX founder Elon Musk from 2018 to 2021, where it was revealed the two had split.

The couple welcomed a son in 2020 and a daughter shortly after in 2021. Speaking to Vanity Fair in March about her relationship with the Tesla CEO, she said, “There’s no right word for it.”

“I would probably call him my boyfriend, but we’re very changeable. We live in separate houses. We are best friends. We see each other all the time. We just have our own thing going and I don’t expect other people to understand it,” she further explained.

Earlier this month, Grimes shared a rare snap of her daughter on her Twitter with the caption, “My daughter dances to techno over this copy of The Birth of Tragedy by Nietzsche – what a queen.”