Emily Ratajkowski showed off her stunt skills while posing in a nude suit for a recent fashion shoot in a series of behind-the-scenes Instagram snaps shared on Friday.

The 31-year-old supermodel, who recently delivered an empowering commencement address at Hunter College early Thursday, could be seen simply being held in the air by a strap tied around her waist.

The talented beauty excitedly wrote in the caption for her 29.7 million followers: “I do my own stunts.” 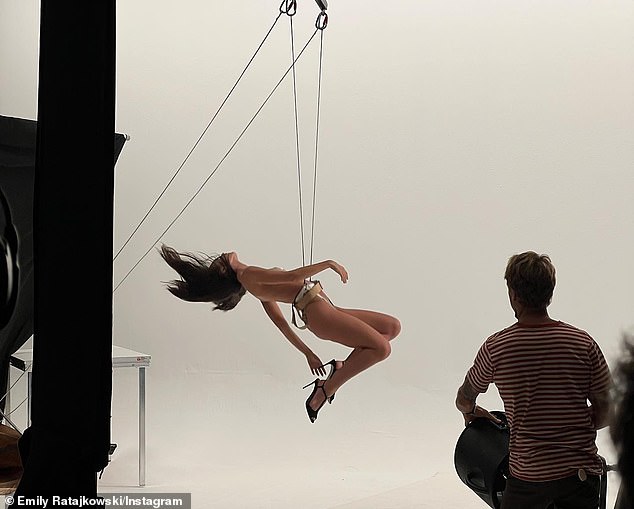 Skilled: Emily Ratajkowski, 31, flaunted her stunt skills in a new Instagram post she shared with her followers on Friday, which included snaps from a recent fashion shoot

In the latest post, Emily gifted her fans a couple of photos of herself being lifted into the air by two strings attached to a silver-tone strap around her lower waist.

Her long brunette tresses cascaded effortlessly over her shoulders in natural waves and gently swept around her A crew member positioned a fan towards her for a high fashion effect.

The Gone Girl actress slipped easily into a pair of open black heels, which secured around her ankles with a thin strap.

The mother-of-one also uploaded a short clip of herself being dropped to the ground as she struck some dramatic poses for the camera just after the director shouted “Action!”

Having fun: The talented supermodel also uploaded a clip showing herself in action as she showed off a few poses while being pulled up in the air

Emily also reached a new milestone when she made a special guest appearance at Hunter College in New York City on Thursday as the commencement speaker for the graduation ceremony.

The star took to Instagram to express her gratitude for the incredible opportunity and uploaded the conclusion of the speech she gave to the students and audience.

Emily encouraged the graduating class to “celebrate” themselves and those around them while speaking onstage wearing a purple cap and dress.

“CONGRATULATIONS CLASS 23,” she wrote in the caption, adding, “What an honor!” Then she thanked, “President Raab and Hunter College for having me today.”

Emily also reflected on her past during the speech, including the decision she made for her career.

“I never made it to my own college degree. After the economic collapse of 2008, I dropped out and chose the financial security I hoped modeling would bring to what I really wanted to do, which is to study and make things,” she expressed on stage .

“Modeling was making more than what my friends were making from service jobs, and I was scared of being saddled with student loan debt. I also knew my window for this opportunity was limited – everyone reminded me that women have an expiration date. So I gave up my education and instead focused on work.”

While continuing to work hard on her career and inspiring others as well, the model is also focused on raising her one-year-old son Sylvester, whom she shares with her ex-husband Sebastian Bear-McClard.

New Milestone: Emily reached a new milestone when she made a special guest appearance at Hunter College in New York City on Thursday as the commencement speaker for the graduation ceremony

Motivating: The mother-of-one gave an emotional and inspirational speech to a senior at Hunter College; seen thursday

The former couple were first spotted together late last year in November, but the following month the stars decided to go their separate ways.

“Their affair has moved into the friend zone,” a source told Page Six at the time, adding that the situation was “fine for both of them.”

Emily was last linked with comedian and actor Eric Andre after the pair were spotted on a date night in the Big Apple earlier in January this month.

Earlier in the weekend, the model posed fashionably in a white cut-out top, prompting Eric to leave a heart-eyed emoji face in the comments section, further fueling their romance rumours.

Main focus: Alongside the hard work of her career, Emily’s main focus has been her son Sylvester, whom she shares with her ex-husband Sebastian Bear-McClard

https://www.dailymail.co.uk/tvshowbiz/article-11658939/Emily-Ratajkowski-wears-nude-suit-model-hangs-mid-air-wires.html?ns_mchannel=rss&ns_campaign=1490&ito=1490 Emily Ratajkowski wears a nude suit while the model hangs from wires in mid-air