Emma Raducanu trained on Thursday as she hopes to recover from an ankle injury in time to face court at the first Grand Slam of the year.

The British No.1 limped off in tears after leaving the ASB Classic in Auckland when she slipped behind the baseline after a sharp turn last week, jeopardizing her Australia Open hopes.

However, the 2021 US Open winner still traveled to Australia in hopes of taking part in next week’s tournament and appeared to offer a positive update at Thursday’s practice session. 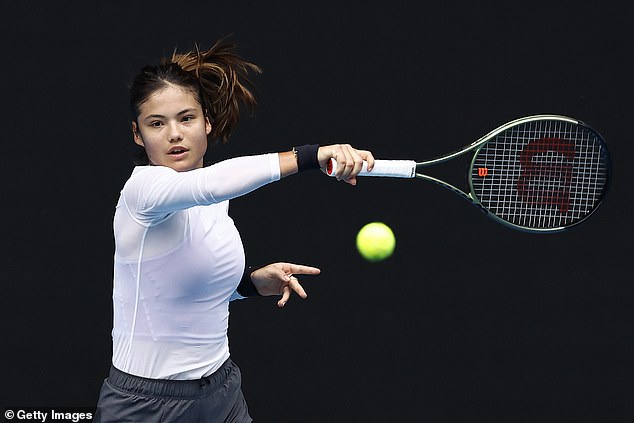 Raducanu was spotted at work at a training session ahead of their first-round match on January 16.

The 20-year-old even appeared to be putting herself through her paces as she darted across the pitch and stretched to hit the ball.

She also seemed to put pressure on the injured ankle as she crouched to take a shot down the baseline, occasionally darting forward to hit the ball closer to the net.

Raducanu meets German number 74 in the world rankings Tamara Korpatsch in the first round of the Australian Open – on the way to meeting American Coco Gauff in the second round.

After leaving the pitch in tears at the ASB Classic, she criticized what she saw as a slippery indoor surface – used outside due to heavy rain – and suggested such a mishap was likely to happen in the conditions.

It was the seventh time in her short career that Raducanu had withdrawn from a tournament through injury.

Raducanu, who started her season with an impressive win over Linda Fruhvirtova, traveled to Melbourne last weekend and spoke about her chances of appearing in the first Major of 2023 during an interview with Tennis Australia.

“Last week was really unlucky to be honest,” Raducanu said.

“I felt great about my season and felt really good with the preparation I’ve been doing physically.

“I’ve just had an accident on the pitch that I don’t know what I could have done to prevent it, so I’m just honestly taking it day by day and trying to see and progress as best I can every day. We will see.

“Hopefully I’ll be fine and ready by Monday or whenever the tournament starts (for me) but we’re just taking it one day at a time and trying not to expect too much at that point.”

The Grand Slam winner, following her success at the US Open in 2021, endured a frustrating 2022 with a series of fitness issues marring her first full campaign on the tour.

A wrist injury ended Raducanu’s last season but a hard-fought win over Fruhvirtova ensured her a positive start to the new year.

The 20-year-old made her Australian Open debut last January but was eliminated in the second round after losing to Danka Kovinic, where she struggled with bladder problems.

https://www.dailymail.co.uk/sport/tennis/article-11630231/Emma-Raducanu-beams-practice-ahead-Australian-Open-continues-recovery.html?ns_mchannel=rss&ns_campaign=1490&ito=1490 Emma Raducanu is beaming during training ahead of the Australian Open as she continues to recover

Lisa Marie Presley Dead: How Elvis' Only Child Went From $100M Inheritance To $16M In Debt