‘Even the ITV curse can’t bring us down!’: England FINALLY end their scorching World Cup record on the channel after beating Senegal 3-0… as fans cheer and Gareth Southgate calls for ‘adulation’ result

England finally lifted their ITV curse by beating Senegal 3-0 in the World Cup Round of 16.

The Three Lions secured a place in the quarter-finals where they will face France next Saturday.

After a weak first 38 minutes, Jordan Henderson broke the deadlock for Gareth Southgate’s side before Harry Kane added a second just before half-time. 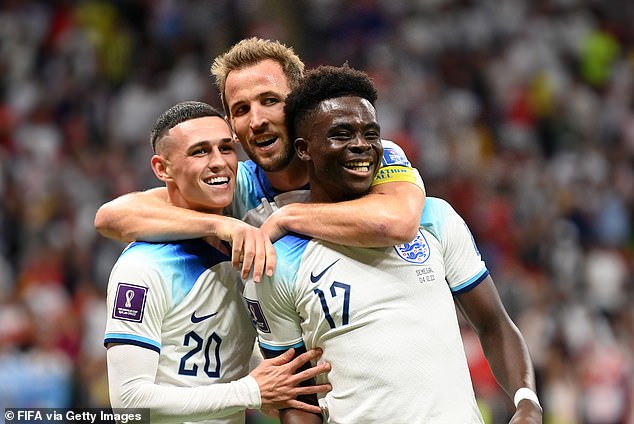 Bukayo Saka confirmed the win in the 57th minute as England led to victory at Al Bayt Stadium.

As well as reaching the last eight of the World Cup, England have seemingly also lifted the ‘curse of ITV’ by showing the match on the channel.

The Three Lions have an appalling record when their World Cup games have been broadcast live on the commercial channel.

Before the Senegal game, England had won just two of their 15 World Cup games on ITV since 1998 – compared to a staggering 12 out of 16 on the BBC.

This meant England’s win rate at ITV was just 13 per cent, compared to a much wealthier 75 per cent at the BBC.

After that game, England’s winning percentage on the channel was increased to 19 percent.

England fans have believed heavily in the so-called ‘curse’ at this tournament so far, with England’s two games on BBC against Iran and Wales resulting in a combined 9-2 score in England’s favour.

On the other hand, ITV broadcast the Three Lions’ dismal 0-0 draw against USA in their second group game.

Even BBC’s Gary Lineker could hardly resist poking fun at his ITV colleagues as England secured their place in the knockout stage.

At the end of the coverage of the 3-0 win over Wales in their last group game, Lineker had said of the Senegal clash: “And it’s live on, well – ITV. Well.’

And England fans were quick to jump on the Three Lions, who finally broke the curse on Twitter after the game.

One supporter said: “Think this could be the moment we finally lift the ITV curse.”

Another added: ‘In your face #ITVcurse!!!’

Another fan tweeted: “The end of the ITV curse gives the man (Gareth Southgate) a knighthood.”

Elsewhere, optimistic fans felt the curse’s end meant everything was in order for England to finally win the World Cup.

One said: “Even the ITV curse can’t bring us down! Bring on France!’

Another said: “This England team is so fresh and young, even the ITV curse isn’t enough to stop them from winning…”

Another user quipped: “I suppose England have broken the ITV curse and dare I say it’s coming…”

Meanwhile, a keen supporter was quick to point out that England’s quarter-final against France is likely to be played on the same channel.

They said: “So much for the ITV curse, right? And from what I understand ITV also has first pick in the quarter finals and will be showing England vs France next weekend.