Erik ten Hag has broken his silence on Cristiano Ronaldo’s Man United exit by saying ‘he’s gone and it’s the past’ before insisting the club ‘look to the future’.

The United boss spoke during a two-part interview while he and the squad are at a winter training camp in Spain.

When asked by former footballer and MUTV host Danny Webber about the January transfer window and how he’s managed Ronaldo’s exit, ten Hag replied: “He’s gone and it’s in the past.

‘We are now looking ahead and we are looking to the future.’

It was a short but powerful response that helps end a chaotic time at the club following Ronaldo’s bombshell interview with Piers Morgan, in which he stated he had no respect for the United boss. 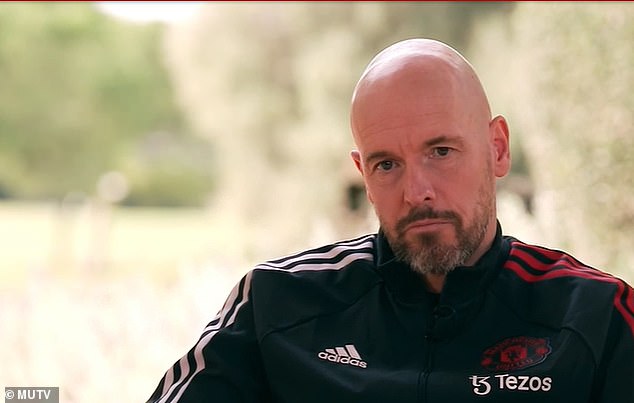 In an interview, Erik ten Hag broke his silence on Cristiano Ronaldo’s departure from Manchester United

At the time, Ronaldo accused Ten Hag and United executives of trying to force him out of the club, saying he had no respect for the Dutchman and felt “betrayed”.

“Some people don’t want me here – not just the coach, but the other two or three guys as well. Not only this year, but also last year.

“Honestly, I shouldn’t say that. But listen, I don’t care. People should listen to the truth. Yes, I feel betrayed.’

At the time, Ronaldo accused Ten Hag and United executives of trying to force him out of the club

The Portuguese star attacked the state of the club, former managers and players before his contract was inevitably torn up and he went to the World Cup without a team.

Ronaldo stirred up even more frustration, this time with his international coach Fernando Santos, who was forced to drop him for his side’s clash with Switzerland after the striker made a “shhh” gesture by putting his finger to his lips laid when he was picked up.

The Portugal captain also went to the dressing room himself after the game after coming on as a late substitute.