The longtime ESPN reporter announces he’s transgender and is changing his name to “MA” Voepel so he can accept the Basketball Hall of Fame media’s recognition of his “authentic self” next month.

Award-winning ESPN reporter Mechelle Voepel is transitioning from a woman to a man and will now use “MA Voepel” while using the pronouns “he/him.”

Voepel announced his transition on Tuesday, saying he plans to accept the Basketball Hall of Fame’s Curt Gowdy Media Award next month as his “authentic self.”

“In sports media we are fortunate to tell stories about other people’s travels,” Voepel tweeted on Tuesday. “We also have our own. Part of me is transgender and I’m becoming male. Byline now MA Voepel, pronoun he/him. Feel free to call me Voepel, MV, Michael, Mike; I’m good with all of them. 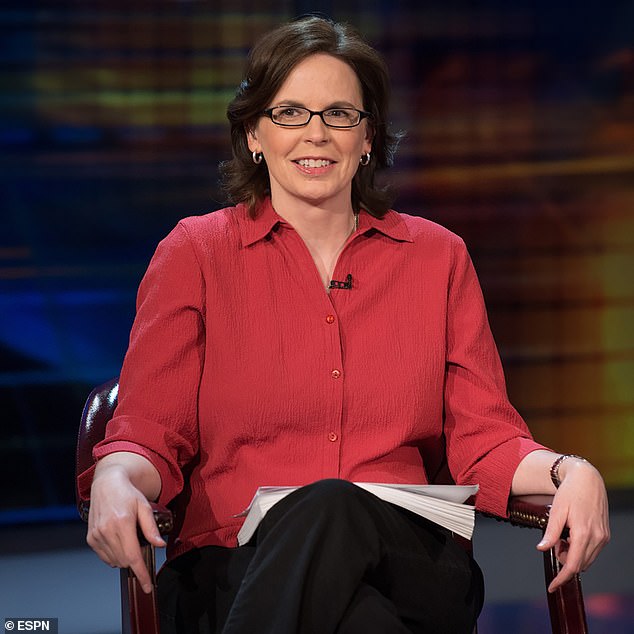 Voepel announced his transition on Tuesday, saying he plans to accept the Basketball Hall of Fame’s Curt Gowdy Media Award next month as his “authentic self.”

“I have the great honor of receiving the Gowdy Award from the Naismith Hall of Fame next month and wanted to do so as an authentic me, hence the announcement now,” he continued. “Fear can keep us paralyzed for decades, especially when we think we’re going to lose everything we hold dear, including our careers.

Voepel, who first joined ESPN in 1996 covering women’s collegiate basketball and later the WNBA, ended his Twitter thread with a gracious comment.

“I might look and sound a little different,” Voepel wrote. “I’m glad to be who I’ve always been on the inside. Commitment to women’s sport, lifelong joy and work, and admiration for everyone involved – players, coaches, managers, fans, referees, colleagues – who always remain the same. Many Thanks!’

“Couldn’t be prouder or happier for my dear friend,” Posnanski tweeted.

Gina Mizell of the Philadelphia Inquirer replied: “Wonderful news Voepel! Thank you for sharing and for setting an amazing example.’

There have been some critics online, but the overwhelming response to Voepel’s announcement has been positive.

Another distinguished reporter, Joe Posnanski, led a wave of support following the announcement

Noted for having covered 20 consecutive women’s Final Fours, Voepel is considered by many peers to be one of the sport’s most trusted reporters.

Voepel is expected to receive the hard copy of the Curt Gowdy Award from the Naismith Memorial Hall of Fame in Springfield, Massachusetts next month. The honor, named after the late announcer, also goes to New York Knicks broadcaster Walt ‘Clyde’ Frazier and longtime NBC exec Dick Ebersol.

“I’m very grateful for the honor because helping chart the growth of women’s basketball has been such a big part of my life,” Voepel told ESPN. “I’m incredibly grateful to have had the opportunity to witness this and work with others who are also so passionate about it.”

Voepel’s biography on ESPN has already been updated with his pronouns.

He is described as a lifelong St. Louis Cardinals fan who is “most interested in animal rescue and welfare.”