California’s appeal to limit EV charging during a terrifying heatwave was mocked on Twitter days after the state passed a ban on gas-powered vehicles that was due to go into effect by 2035.

The state’s top energy regulator has warned Californians not to charge their electric vehicles between the 4 p.m. to 9 p.m. peak hours through Tuesday and to crank their thermostats up to 78F to avoid blackouts.

The unusual combination of circumstances as triple-digit temperatures weigh on California’s aging power grid was seen by some as evidence the state hadn’t thought through its green agenda. 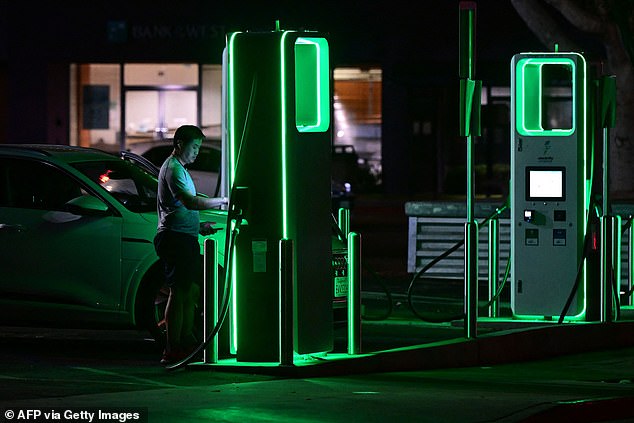 A driver charges his EV at a charging station in Monterey Park, Calif., Wednesday as state regulators warn EV drivers not to charge during the 4 p.m. to 9 p.m. rush hours

“Maybe we should figure out how to fix our electricity grid before we ban gas cars…just a thought,” @AerysGG tweeted

The strain on California’s power grid comes as the National Weather Service issued an “excessive heat” warning for most of the state, with highs of over 100F forecast in the Los Angeles area over the weekend.

Nighttime temperatures aren’t expected to offer much relief as lows are struggling to get below 80 degrees Fahrenheit in many places.

In his executive order removing pollution caps for fossil-fuel power plants, Newsom pointed to the punishing drought in the western United States, which has shut down hydroelectric power plants.

“Energy security is becoming increasingly difficult … because demand is increasing while supply is decreasing,” he said, saying the situation shows the real effects of climate change.

About 50 percent of California’s electricity generation capacity comes from natural gas-fired power plants, with most of the rest coming from a mix of solar, hydroelectric, nuclear, and wind.

Newsom also urged households to do their part “to help us get through the next week or so of cranking the thermostat up a little to 78 degrees at home and trying to pre-cool earlier in the day; Try not to use too much electricity… between 4pm and 9pm.’

Meanwhile, California became the first country in the world to officially enforce a sales ban on new gasoline cars through 2035 after a public hearing on Thursday that ended with the California Air Resources Board agreeing to approve the policy.

Automakers must now reduce the number of gas guzzlers they sell to meet the first quota of the plan, which requires 35 percent of new cars, SUVs and small pickup trucks sold in California to be zero-emission vehicles by 2026.

The rate increases every two years, by 2028 it will be 51 percent, by 2030 68 percent and five years later 100 percent of all new vehicles sold will be battery-powered – 20 percent of which can be hybrid plug-ins.

The National Weather Service has issued an “excessive heat warning” for most of California, with temperatures expected to exceed 100F in some areas by the weekend

The new policy may be a step in the right direction to tackle emissions, but officials face several obstacles to ensuring each of the targets is met.

One such hurdle is installing enough charging stations across the state.

Although California has the most charging stations in the country, 2.1 million will be needed by 2030 to meet the demand of the new huge fleet of electric vehicles.

Those numbers fall short of the government’s goal of 250,000 chargers for 54,000 installations.

John Bozzella, President and CEO of the Alliance for Automotive Innovation, said the mandate is an “extremely challenging” for automakers.

“Whether or not these requirements are realistic or achievable is directly related to external factors such as inflation, charging and fuel infrastructure, supply chains, labor force, availability and pricing of critical minerals, and ongoing semiconductor shortages,” Bozzella said in a statement.

“These are complex, interrelated and global problems.”

Californians are being advised not to charge their electric cars between 4 p.m. and 9 p.m. Wednesday through Tuesday due to the excessive heatwave to relieve the grid

Additionally, officials have not mentioned how they plan to upgrade the power grid to cope with the onslaught of more electric vehicles, nor how it will deal with a congested power grid during heat waves in the future.

The California Independent System Operator (ISO) told DailyMail.com that the main stress on the power grid in summer is air conditioning, but said it’s too early to know the final impact that more electric vehicles than driver changes will have on the power grid be over.

“It is too early to say what the impact of the 2035 ban will be, but for now we are asking EV owners to avoid charging during the 4pm to 9pm time on Flex Alert days, if possible” , Anna Gonzalez, CA ISO’s public information officer, told DailyMail.com on Wednesday.

As Labor Day weekend approaches, California and the rest of the West are expected to grapple with a high-temperature heatwave.

Forecasters are warning people the heatwave will be intense and prolonged, with above-average temperatures typically seen in June and July rather than early September.

Most of the West has avoided intense summer heatwaves due to the North American monsoon, which has kept temperatures lower than normal, but the rollout of heat advisories and excessive heat monitors will begin this weekend.

California is expected to experience the mid to late 90s this weekend through Tuesday.

https://www.dailymail.co.uk/news/article-11169955/California-EV-drivers-mock-warning-not-charge-heatwave.html?ns_mchannel=rss&ns_campaign=1490&ito=1490 EV drivers in California scoff at warning not to charge during a heat wave