Prince Harry and Meghan have been forced to pay for their own team of private security guards after German authorities classified their trip as a “private event”.

The Sussexes will spend Tuesday in Dusseldorf, where they will enjoy a cruise down the River Rhine after touring Manchester today in what was their first visit to British soil since the Queen’s platinum jubilee in June.

However, police in Dusseldorf told the couple that they will have to pay for their own security service and officers will only take minor protective measures, mainly for crowd control.

Roadblocks are erected at busy crossroads to allow their car convoys to race from the airport to the city center instead of getting stuck in traffic.

Bodyguards who escorted the couple to Manchester today will be by their side in Germany, along with a small team of local security forces.

Prince Harry has been embroiled in a lengthy legal battle with Britain’s Home Office after it previously refused to give the couple police protection so they could return to the country after stepping down from royal duties and moving to California.

The 37-year-old Duke of Sussex has taken legal action against the department after being told he would no longer receive the “same level” of personal protective security if he visited from the US. 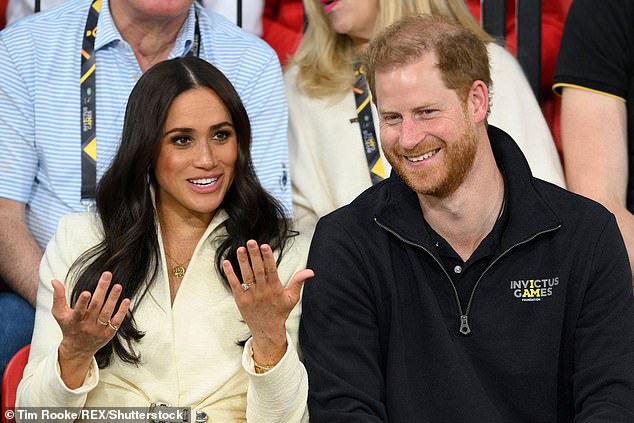 The Sussexes pictured at the Invictus Games in The Hague, Netherlands, in April this year

The Sussexes travel to Manchester on Monday where Meghan, 41, is due to deliver a speech on gender equality. The summit brings together young leaders from more than 190 countries.

After traveling to Manchester on Monday, the Sussexes travel to Dusseldorf on Tuesday to mark a year before Harry’s next Invictus Games.

Police will be responsible for controlling traffic near the historic town hall, where they will meet local dignitaries, and later at the sports stadium, where next year’s sporting event will be held.

Harry and Meghan could interact with members of the public on a short cruise down the Rhine.

Local security guards will be on duty here to ensure no one gets too close to the couple.

Harry and Meghan are expected to take a 30-minute cruise down the Rhine.

It will also be the only real opportunity for locals to see the couple as the events at City Hall and the stadium are by invitation only.

Less than 24 hours before Harry and Meghan’s arrival, no security measures were visible in the market square where they will enter City Hall.

The only sign of activity was a window cleaner polishing the ground floor windows of the building.

Unlike in Manchester, no “steel ring” was prepared for the visit.

Most of the locals sitting in cafes around the market square were unaware that the couple was even visiting.

Police sources have clarified that Prince Harry is coming to Dusseldorf as a “private individual”.

“It’s something he initiated,” the source said.

The source added: “Policing will be very low key. He’s here as a private person, but he’s a guest of the city and we want him to feel safe.

“There is no limit to the use of private bodyguards”

In the Netherlands earlier this year, a team of five bodyguards flew in from the US at the Invictus Games and was led by former Secret Service agent Christopher Sanchez.

A native of Houston, Texas, he was part of Touchstone Global, a company that provides security at major sporting events.

A company spokesman declined to comment on the visit to Germany.

Meghan has also been spotted with Alberto Alvarez as her personal bodyguard.

He used to work as security chief for the late “King of Pop” Michael Jackson.

The couple will fly to Düsseldorf late Tuesday morning and will be driven to City Hall, where they will be greeted by Mayor Stephan Keller.

Harry will sign the town’s Golden Book, a leather-bound book in which all VIPs who visit will sign their names.

The couple left in a convoy of Range Rovers ahead of the first leg of their European tour, which will take them to Manchester, Dusseldorf and then back to London

He will attend a lunchtime reception before traveling to the Merkur Games Arena where you will meet the participants of the next September Games as well as the event organizers.

Harry will give a speech celebrating the games and their power to heal those affected by the battle.

A press conference is held, but Harry is not expected to answer any questions.

It is believed that the couple will fly back to London in the evening instead of staying in Germany.

They have a “day off” on Wednesday before attending the WellChild event in London, where Harry will give a speech.

After he resigned from his royal duties, it was decided to remove the prince from the Protection of Kings and Public Figures (Ravec) list, members of which receive an automatic security funded by the taxpayer.

In July, Harry won the right to bring a High Court case against the Home Office over his security arrangements in the UK.

A High Court judge said Harry had a “contentious” case on four of the five grounds on which he brought his complaint and that his lawyers will be able to present his arguments at a judicial review of the Home Office’s decision.

After his official role ended and he “became a privately funded member of the royal family, permitted to earn his own income and pursue his own charitable interests,” Ravec withdrew guaranteed police support.

Ravec leader Sir Richard said in a letter to the Queen’s private secretary that while the committee would “continue to monitor the safety of the Sussex family”, the “existing regulations of the Metropolitan Police will be withdrawn… there is no basis for that.” Publicly funded security support”.

Harry said he only discovered the extent of the change when he made one of his rare visits to England in June 2021 and was unhappy with the arrangements made.

The Interior Ministry claims that Ravec was entitled to make the decision to have its security arrangements reviewed on a case-by-case basis.

https://www.dailymail.co.uk/news/article-11181947/EXCLUSIVE-Harry-Meghan-protected-privately-funded-bodyguards-visit-Dusseldorf.html?ns_mchannel=rss&ns_campaign=1490&ito=1490 EXCLUSIVE Harry and Meghan have to foot the bill for their own bodyguard team