There were chants of “Chelsea Rent Boy” at Old Trafford and the Etihad. Songs about Jimmy Savile rang out at Cardiff City Stadium. There were shouts of “Feed the Scousers” in the away area at Anfield. In other words, it was just another weekend of English football.

Abusive, discriminatory and offensive chanting is a taint in the national game that has lingered for decades. However, statistics show that the number of people reporting the issue is now escalating. And a tipping point seems to have been reached this week when the FA warned clubs they could be charged for crowd-singing – and Crown prosecutors told fans they could face criminal action.

Douglas Mackay, CPS Sports Attorney, told Sportsmail: “We are appalled that the beautiful game has been marred by hateful and abusive behavior in recent weeks. While chants create an amazing atmosphere, songs with homophobic or racist language have no place in sports. 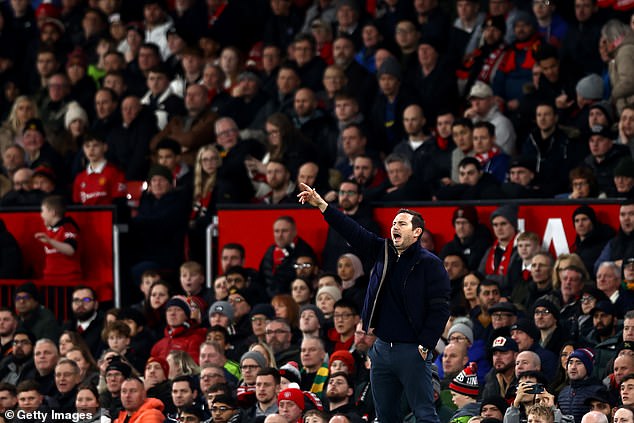 “This illegal activity can and has been criminally prosecuted, with perpetrators receiving criminal records and football bans. The CPS will continue to work closely with the police, football authorities and supporter groups to stamp this out.’

Figures released exclusively by Sportsmail show that football’s main anti-discrimination group, Kick It Out, was reported to have had 123 chants from the top four English leagues last season. That was more than double the 62 complaints filed during the 2019-2020 season, which ran in front of packed stadiums through mid-March.

In the first half of this season, 50 songs have already been reported. Separately, Home Office figures show the number of hate crimes – including discriminatory chanting – reported at games last season was 384, up from 287 in 19-20 and 193 in 18-19.

An FA source told Sportsmail that they are “deeply concerned” by the prevalence of offensive and abusive chanting and that tackling the issue has become a key priority for the governing body. “We are committed to eradicating this behavior,” added a spokesman.

The problem has been particularly evident since the turn of the year, when the ‘Chelsea Rent Boy’ chant was clearly heard on three different televised matches. It was sung by Nottingham Forest and Manchester City fans in their respective final games against Chelsea, while Manchester United fans chanted it to Everton manager and Blues legend Frank Lampard during last Friday’s FA Cup clash.

On Wednesday, the FA took the unprecedented step of writing to clubs to remind them they can take “formal disciplinary action against any club whose supporters behave in a discriminatory manner, now including the use of the term ‘hustlers’.”

That comes after the CPS confirmed last year that the “Rent Boy” chant – which dates back to the 1980s and rumors that a Chelsea hooligan was found in bed with a male prostitute – is a hate crime and she already has one Condemned and fined Tottenham and a Liverpool fan for singing it.

However, it’s not the only homophobic chanting to be heard on the premises. Players and fans of Brighton – known for its large LGBTQ+ population – regularly find themselves mocked. During the Seagulls’ game at Southampton on Boxing Day, two home fans were kicked out of the stadium and subsequently banned after shouting ‘you’re just a town full of poofters’.

Stuart Matthews, founder of Brighton’s LGBTQ+ fan group Proud Seagulls, told Sportsmail: “It makes me angry and very discouraged. I’m sick of it now We are in the 21st century and football needs to evolve.”

In the first half of the 2022/23 season, 50 abusive chants have already been reported

Another club frequently abused by fans is Liverpool, whose songs poke fun at poverty, unemployment and, most shockingly, Hillsborough. This has become an area of ​​concern for authorities because while they can crack down on homophobic and racist chants because they are “discriminatory”, there is nothing in their power to prevent widely abusive anthems, however vile.

That’s not good enough for Labor MP Ian Byrne, a survivor of the 1989 tragedy that killed 97 Reds fans, who sent a letter to Premier League boss Richard Masters after Manchester City supporters called ‘killers ‘ had sung at Anfield earlier this season.

He wrote: “These chants and the people behind them put the game to shame. The Premier League has a duty of care to these fans and the incessant chanting that is now happening weekly needs to be tackled at its root.

Another sick song that remains unchallenged is ‘Jimmy Savile, he’s one of your own’, aimed at Leeds supporters who sometimes respond with even more vile lyrics about the predatory sex offender who was born in the city and died in 2011 .

Graham Hyde, former deputy chairman of the Leeds United Supporters’ Trust, said: “Why are they singing about a serial pedophile and rapist? He wasn’t even a Leeds fan. But part of the nature of football banter has traditionally been trying to provoke the other fans with something, and if you get a reaction, you win.”

Sportsmail revealed last week that Leeds are currently consulting fan groups over their chant for striker Willy Gnonto (pictured), which includes a line about the size of his penis

Sportsmail revealed last week that Leeds are currently consulting fan groups over their chant for striker Willy Gnonto, which includes a line about the size of his penis and has been condemned for perpetuating racial stereotypes. It’s one of 12 chants reported to Kick It Out for racism this season, including one using the N-word.

But it’s songs containing the anti-Semitic Y-word that are reported most often, with 44 flagged in the last season alone. Tottenham fans have long used the word in chants about their own side, despite the club telling them last year to “move on” after a tenure review.

Another act of anti-Semitic abuse that Kick It Out reported on last season was “hissing” to mimic the noise of Nazi gas chambers. Chants containing the terms “pikey” and “gypo” were also reported 14 times in the past year.

Kick It Out CEO Anthony Burnett told Sportsmail: “Our figures show that chant-related reports have remained consistently high over the past few seasons. You only have to look at the spate of incidents involving homophobic chanting in recent weeks to see that this is a problem that is not going away.

“While abusive mass chanting is often dismissed by participants as mere banter, the effect this behavior can have on those it alienates is significant. As long as this issue is left unchecked, there will be people who continue to feel isolated and insecure within the game. It is important that football gets this problem under control as a matter of urgency.”

https://www.dailymail.co.uk/sport/football/article-11629435/FA-wade-abusive-chants-statistics-number-complaints-ESCALATING.html?ns_mchannel=rss&ns_campaign=1490&ito=1490 FA wade over abusive chants as stats show the number of complaints is escalating