Survivors of the Fairbridge child migrant scheme are demanding answers from the Prince of Wales and his charity after their compensation was delayed by another two years.

The child migration scheme between 1912 and 1980 saw about 130,000 children from largely impoverished backgrounds sent from the UK to Australia, Canada, New Zealand and Zimbabwe (then Rhodesia).

A group overseen by the Prince’s Trust is still due to pay compensation to survivors in Australia, many of whom are elderly and in ill health, despite a deadline passing on Monday.

In 2012 the Prince’s Trust absorbed the charity Fairbridge, responsible for a farm school in rural New South Wales (NSW), Australia, where more than 200 survivors won compensation in 2015.

After major inquiries in the UK and Australia into child abuse in institutions, the Charles-founded charity set up a separate company called Fairbridge Restored in 2020.

As soon as it was created, Fairbridge Restored was put into administration and tasked with dealing with compensation pay-outs for survivors of the farm schools, which continued to operate despite being blacklisted by the Home Office in 1956.

Fairbridge Restored’s administration period had been due to expire on Monday, but with no compensation paid out to survivors it has now been extended for a further 24 months. 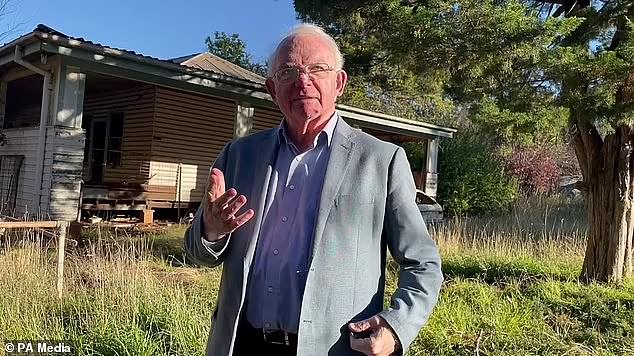 David Hill, a former child migrant who has written two books about Fairbridge Farm Schools, expressed anger over the delay

Five boys are pictured cutting up carcasses at Fairbridge. In Australia, around 10,000 British children were sent to 26 child migrant centres in six Australian states

For the more than 70 years that Fairbridge operated schools in Australia almost no former student was ever able to acquire and operate their own farm. Boys are pictured cutting railway sleepers with a two-man crosscut saw

Food was often barely edible. Maggots crawled in flyblown mutton and porridge moved with weevils. Plates, bowls and mugs were all made of steel. Students are pictured eating at Nuffield House at Molong’s Fairbridge Farm School

David Hill, a former child migrant who has written two books about Fairbridge Farm Schools, expressed anger over both the delay and the fact news of it had come via the PA news agency rather than administrators or the Prince’s Trust themselves, despite repeated attempts for progress updates.

What were the Fairbridge Farm Schools?

The Fairbridge scheme was the brainchild of Kingsley Fairbridge, a ‘child of Empire’ and member of the Oxford Colonial Club.

As early as the 1900s he was advocating sending children from England’s ‘orphan and waif class’ to the colonies to take up land as white settlers.

In 1912 the first Fairbridge Farm School open in Australia – in Pinjarra, some 50 miles south of Western Australia’s capital Perth – and many more would follow throughout Britain’s colonies.

By 1934 the plan had the backing of King Edward VIII (then the Prince of Wales) who donated £1000 to Fairbridge, declaring: ‘This is not charity. It is an imperial investment.’

What was the One Parent Scheme?

For the first 50 years of operation, the scheme sought to permanently separate children from their parents.

This fact was something many did not realise when they signed their children up and had all contact severed with their children, often forever.

This changed in 1957 when the One Parent Scheme was introduced, allowing one parent to follow their children to Australia to set up a home and find work, and once the children were legally allowed to leave school, they could go and live with their parent.

Why was it introduced?

By the 1950s the number of children being signed up to the scheme was declining due to opposition from social workers.

The most scathing of which saw Fairbridge’s farm schools in both Molong, some 180 miles west of Sydney, and Western Australia backlisted by the Home Office.

The report was suppressed by Fairbridge, which was made to reform in order to keep receiving funding from the British Government.

How old were the children deported by Britain to its colonies?

Children were as young as four but the typical age was eight or nine.

What percentage of the children were sexually abused?

At Fairbridge Farm School in Molong alone, more than 60 per cent of survivors won compensation in the New South Wales Supreme Court in 2015 against Australia’s state and federal governments and the Fairbridge Foundation for the sexual abuse they suffered at the institution.

‘I just think it’s appalling, absolutely appalling. I mean, it’s cruel. People are dying, people are dying and (the Prince’s Trust) promised that they would expedite this and they haven’t. Justice is being denied still,’ Mr Hill said.

He accused the charity of being more concerned with distancing itself from Fairbridge and its ‘sullied reputation’ than justice for survivors.

Earlier in 2022, Mr Hill had written to Charles – who founded the Prince’s Trust and has been its president for the past 40 years – imploring him to assist in bringing about a resolution to the pay-out saga due to the ‘variable health’ of the surviving Fairbridge children.

‘(They) are ageing and dying at an increasing rate. If delayed long enough there will be no victims left to pay redress,’ the letter read.

Mr Hill received no response from the Prince of Wales or Clarence House.

Mr Hill, the former managing director of the Australian Broadcasting Corporation, told PA: ‘It’s been appallingly managed by the Prince’s Trust. They should be ashamed of themselves.

‘Prince’s Trust established Fairbridge Restored, gave it the money then put it into administration, which means they’ve done a Pontius Pilate and washed their hands of it. And the administrators – who are lawyers, (and who) have got no idea what this is about – have got to spend the money.’

In 2015, more than 200 survivors of the Molong farm school in rural NSW to which Mr Hill and around a thousand other British child migrants were sent received a record pay-out of 24 million Australian dollars (£13.6 million) from the state government.

The farm school had been blacklisted by the UK Home Office in 1956 after a fact-finding mission found the Fairbridge institutions were ‘unfit for children’ but continued to receive British child migrants for the next two decades.

The class action launched by survivors after the publication of Mr Hill’s book The Forgotten Children found that more than 60% of children at the school had been sexually abused.

Then in 2018, Britain’s Independent Inquiry into Child Sexual Abuse (IICSA) found both the UK Government and Fairbridge were aware of abuse at farm schools in Australia as early as the 1930s.

Its final report said: ‘Fairbridge UK denied responsibility and was at best wilfully blind to the evidence of sexual abuse contained within its own archives.’

Around the same time, the Australian government published its final report from its own Royal Commission into Institutional Responses to Child Sexual Abuse.

On the long list of offending institutions was Fairbridge UK – which, by then, had been absorbed by the Prince’s Trust and had its name dissolved.

Mr Hill had earlier warned the Prince’s Trust it was a mistake to set up an insolvent company for paying compensation to the National Redress Scheme for victims of institutionalised abuse.

‘(Prince’s Trust) have been dragging this out since 2018 (which is when) they said they’d do this (pay redress to Fairbridge survivors). So it’s now four years,’ he said.

‘About half the Fairbridge kids that were alive four years ago are now dead. I’m pretty unimpressed with them.’

In a statement to PA, Australia’s Department of Social Services (DSS) confirmed the federal government had stepped in to pay redress on Fairbridge Restored’s behalf after it declined to join the scheme on July 1 2020 following the expiry of a 30 June 2020 deadline.

DSS further added that it would continue to act as a funder of last resort for redress scheme applicants who attended the now-defunct Fairbridge farm schools.

British child migrants who were physically and sexually abused as children at the notorious Fairbridge Farm School in rural Australia have had their long fight for justice immortalised in a new book. Above: Children are pictured shearing sheep at the school near Molong, New South Wales

Five boys are pictured cutting up carcasses at Fairbridge. In Australia, around 10,000 British children were sent to 26 child migrant centres in six Australian states

Frederick Woods, known as The Boss, ruled every aspect of the Fairbridge children’s lives for almost a quarter of a century. He is pictured on the steps of the Fairbridge chapel with his wife Ruth. Woods was repeatedly investigated over allegations he sexually abused girl

Children are pictured in the kitchen at Fairbridge Farm School, where many were abused

The amount paid out to survivors in lieu of Fairbridge Restored so far by the Australian government is protected information so could not be released, DSS said.

PA’s repeated requests for comment from the Prince’s Trust have been met with the direction to contact the administrators of Fairbridge Restored.

The charity also denied that it was the ‘parent company’ of Fairbridge Restored.

Fairbridge Restored’s administrators confirmed in a statement they had ‘made an application to the UK court and an order was granted to extend the administration process for a further 24 months, to 5 September 2024’.