Finally, some good news about the energy bill! Desperate families will see the price cap drop to £2,200 by summer as analysts issue improved forecasts amid falling gas prices

By Danya Bazaraa For Mailonline

Struggling families could finally see energy bills hundreds of pounds lower than previously forecast for the second half of this year – but only after a spring spike, a new analysis suggests.

The average household’s energy bill could reach around £2,200 a year from July, around £300 less than previously thought, experts at Cornwall Insight have said.

It’s about what the average family pays today, after accounting for government support.

Without government support, the average household would pay £4,279 a year on their energy bill between January and April – the same as Ofgem’s price cap.

But the government has overridden the price cap with a promise to cover the difference and ensure average bills are £2,500.

She also sent £400 to every household in the country between October and March. 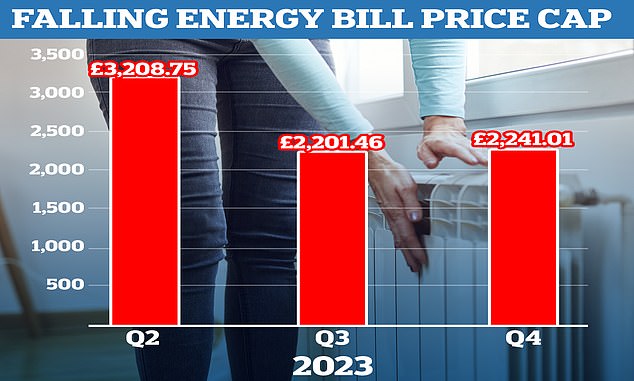 From April the support will become less generous, bringing average bills down to just £3,000.

Cornwall Insight’s new forecasts suggest Ofgem’s price cap will be set at £3,209 from early April, around £300 lower than it was two weeks ago.

This does not reduce the amount that households pay, as it is still overridden by the less generous government guarantee. However, it will mean that the guarantee will cost the government less money.

Cornwall and other experts have long forecast that energy prices will not return to levels previously considered ‘normal’ before the end of the decade, if at all (stock photo).

What is the energy price cap?

The energy price cap determines the maximum per-unit cost that energy companies can charge for both gas and electricity. A typical annual statement is then calculated from this.

The price cap was introduced in January 2019 to ensure that households who are not on permanent contracts – and in some cases are less financially savvy – are not ripped off by their energy suppliers.

Twice a year, energy regulator Ofgem set the maximum price households using their supplier’s standard tariff would have to pay for each unit of gas and electricity consumed over the next six months.

It allowed for a small profit – capped at 1.9 percent – that utilities could earn for providing the service. The frequency of the cap was increased from every six to every three months on August 4th.

The cap is calculated by Ofgem based on the wholesale price of gas and electricity and also includes allowances for taxes, fees paid to energy networks, environmental and social charges.

After that, the price cap will fall back to £2,201 from July and rise slightly to £2,241 from October to the end of the year, the energy consultancy said.

If these forecasts come true – which is far from certain as gas prices change daily – it means that government support for energy bills will in practice end in July, as bills will obviously be lower than the ceiling promised by ministers .

Gas prices have plummeted in recent weeks, more than halving since early December.

But while wholesale gas is cheaper at around 150p a therm than it has been for over a year, this is still around three times what it was in early 2021.

dr Craig Lowrey, senior adviser at Cornwall Insight, warned that if global markets were spooked, things could turn around quickly.

“With our price cap forecasts falling again, it’s only natural that people assume our forecasts will remain on a downtrend,” he said.

“But we really don’t have any precedent for finding out how the market will develop in 2023.”

Cornwall and other experts have long predicted that energy prices will not, if ever, fall back to levels previously considered ‘normal’ by the end of the decade.

“So some perspective needs to be maintained,” said Dr. Lowrey.

“April cap projections remain almost three times what a typical household paid before the pandemic and if the Energy Price Guarantee rises some households could be left with hundreds of pounds to their April bills.

“We don’t know what will happen in the coming months and there is still a long way to go before anyone can be sure what the actual unit rates will be after the summer.

“While bearish wholesale markets and cap forecasts may be cause for celebration, nothing is guaranteed in this new European energy market.

“Politics really need to be aware of sudden changes and be both resilient and responsive in such an environment.”