Tennis fans are backing Emma Raducanu to “come back stronger” after her second-round loss to Coco Gauff at the Australian Open… as they insist she played her “best match” since winning the US Open, despite injury concerns

Emma Raducanu was supported by fans to “come back stronger” after the British star was beaten by Coco Gauff in the second round of the Australian Open in Melbourne.

Gauff, the seventh seed in the women’s singles, earned a 6-3, 7-6 win over Raducanu in an hour and 42 minutes.

Raducanu entered the match 70 places behind Gauff in the rankings while her preparations were paused after suffering an ankle injury in Auckland. 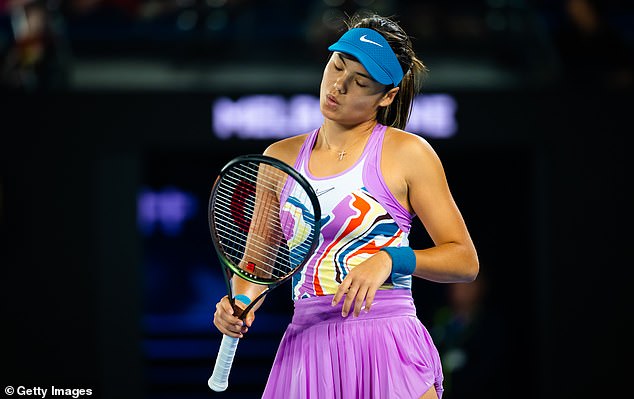 The 20-year-old threatened to take the match into a decider after making an impressive save after losing the opening set to the American teenager.

Despite losing in straight sets, Radacanu’s overall performance has garnered a lot of praise from the fans.

“Emma Raducanu will come back stronger,” commented one fan. “She will prove everyone wrong. Mark my words!’

“Pleasantly surprised by the level of play Emma Raducanu brought to Coco today,” added another. “She’s definitely back on track after a tough 2022. Forced Coco to dig deep and up her game.”

“I really hope Emma Raducanu has a good year,” tweeted another. “She played brilliantly tonight. Hopefully when the injury/fitness issues are behind her she can make it back to the top of the game.

Fans also expressed optimism that the game could be the start of a rivalry between Gauff and Raducanu, with the pair being 18 and 20 years old respectively.

The second round match had been the first meeting between the two.

Raducanu’s performance has convinced some fans that the British number one is returning to the level at which she won the US Open in 2021, while Gauff has been tipped to win her maiden Grand Slam title soon.

“Just stayed up to watch the Gauff v Raducanu game and it didn’t disappoint,” one fan tweeted. “Emma played great, I want nothing more than to see them win another Major but Coco it’s just so good, man. I hope this turns into a great rivalry for years to come.

“Emma Raducanu played one of her best matches since winning the US Open years ago. Coco Gauff was just way better,” said another. “Worldwide defence, great serve and a hugely impressive and compelling win. Her first Grand Slam is just around the corner.”

“Emma Raducanu is probably the better player but Coco Gauff’s defense was incredible,” claimed another fan. “What an athlete.”

Gauff will be looking to improve on her fourth-round elimination at last year’s Australian Open as the American teenager aims to reach the second Grand Slam final of her career.

https://www.dailymail.co.uk/sport/tennis/article-11648395/Fans-claim-Emma-Raducanu-come-stronger-second-round-exit-Australian-Open.html?ns_mchannel=rss&ns_campaign=1490&ito=1490 Fans claim Emma Raducanu will ‘come back stronger’ after a second-round elimination at the Australian Open.

Househunters admit they were put off by this ad - but can YOU see what's wrong with it?