A woman has died and two others have been hospitalized after a three-car crash in Melbourne.

The three cars collided just before 8am Tuesday morning at the intersection of Queens and Beenak Rd in Seville, in the northeast of the city.

The driver of one of the cars died at the scene and has not yet been officially identified.

The male driver of another vehicle was flown to a hospital with life-threatening injuries. 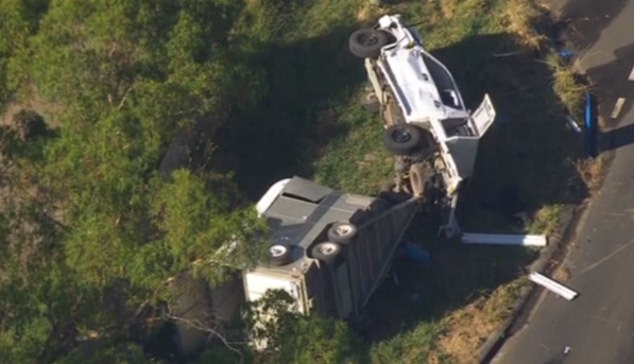 A woman has died after a three-car collision (above) in Seville, north-east Melbourne

A man, woman and child were in the third vehicle, a Toyota Hilux, towing an empty horse-drawn wagon.

Both adults were taken to hospital by road while the child was flown. They all suffered life-threatening injuries.

Victoria Police said detectives from the Major Collision Investigation Unit were investigating the circumstances of the crash.

Anyone with relevant information or dashcam footage of the incident is urged to contact Crime Stoppers.

So far this year 16 lives have been lost on Victorian roads.

Police are investigating the circumstances of the accident (above), which saw three cars collide at an intersection just before 8am on Tuesday

https://www.dailymail.co.uk/news/article-11642477/Seville-three-car-crash-kills-woman.html?ns_mchannel=rss&ns_campaign=1490&ito=1490 Fatal car crash in Melbourne: A woman dies in a three-car accident in Seville